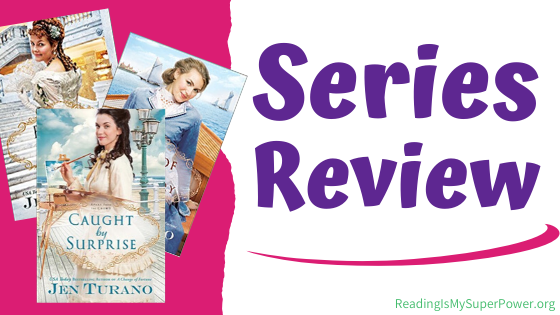 Today, I’m featuring reviews for the Apart From the Crowd series  – Behind the Scenes, Out of the Ordinary and Caught By Surprise – by Jen Turano!

Most people know that I’m hopelessly behind when it comes to reading and reviewing. Like, almost three years behind lol. 2017 was a tough, emotional year for me. My dad was diagnosed with multiple myeloma cancer (for which he’s now in remission!), I turned 40, and my mother-in-law passed away from ovarian cancer only 1 month after her diagnosis. More recently, my Lyme Disease treatment is wearying & time consuming, not to mention that I work a ‘day job’ and co-run JustRead Publicity Tours. Needless to say, my time or energy to read & review has been next to nothing for too long now.

Fortunately, I’m starting to better streamline some things (with the help of my dear book sisters) & I’m in the process of catching up. So you’ll probably see some ‘tales of the bottomless TBR pile’ reviews popping in more often, especially once the Love Stories series is done. Most people have also been incredibly gracious & understanding as I tried very hard to support my fave books & authors in other ways until I could review more regularly again. For that, I’m so grateful. 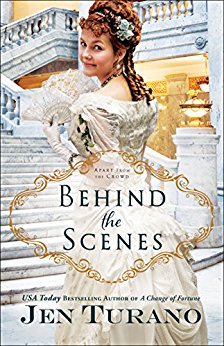 After spending the last six years banished to the wallflower section of the ballroom, Miss Permilia Griswold has finally figured out a way to pass the time at all the New York high-society events she attends. Under the pseudonym “Miss Quill,” she is the author of society gossip columns filled with tidbits only an insider in society–albeit one on the fringes–would know.

When she overhears a threat against Mr. Asher Rutherford, the owner of one of the most up-and-coming department stores in the city, she’s determined to warn him. But the irritatingly handsome man doesn’t believe her, leaving her no choice but to take matters into her own hands. What she doesn’t anticipate is that she’ll end up putting herself at risk in the process–or that she and Mr. Rutherford, a man with secrets of his own, just might end up joining forces after all.

“Of course there would be an untimely sneeze.”

When Jen Turano is at the helm, you can always count on much laughter. She spotlights the already-extreme quirks of Gilded Age high society and turns them into the most outlandish tongue-in-cheek version of themselves.  Her writing is a mix of Georgette Heyer and P.G. Wodehouse but set a bit on its end. From the dialogue (which can slide into a hilarious info-dumping) to the madcap mayhem, the ensuing result is copious amounts of giggles and amusingly endearing characters.

Bottom Line: Behind the Scenes by Jen Turano is a light, fun romance with a dash of suspense and a bucketful of hilarity! The characters – and the setting – leap off the page, and you’ll find yourself more than once wanting to grab Permilia into a spontaneous hug. Particularly during the Go-As-You-Please quadrille. Although… that hug might be for self-preservation purposes more than anything else 😉 Gilded Age society has never been more entertaining, and I’m already eagerly anticipating the next wildflower in the spotlight! 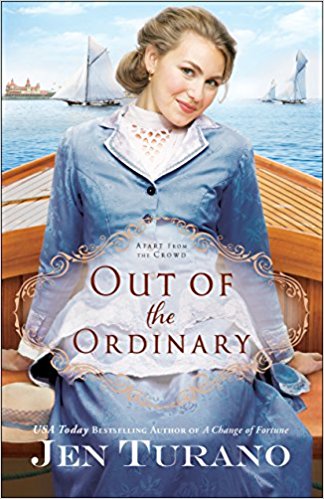 Working as a paid companion may be quite commonplace, but Miss Gertrude Cadwalader’s eccentric employer makes her job unpredictable, to say the least. She finds herself carrying out an array of highly unusual tasks, including wearing peculiar outfits and returning items the woman pilfered. But when the wealthy Mrs. Sinclair catches Gertrude sneaking around the Sinclair yacht with some of the missing items in her possession, she immediately jumps to the wrong conclusion.

Shipping magnate Harrison Sinclair is caught in the middle of a misunderstanding between his mother and Gertrude, but he can’t help coming to his friend’s defense. Even as he hopes their friendship might become something more, Harrison is unprepared for the outlandish escapades that seem to follow the lovely, anything-but-ordinary Gertrude at every turn.

“The very sight of that grin caused her soul to sing.”

As I said in my long-ago review of Behind the Scenes – Jen Turano’s writing is a mix of Georgette Heyer and P.G. Wodehouse but set a bit on its end. What results is a lot of madcap mayhem and amusingly endearing characters, and the same can be said of Out of the Ordinary.  I’m thinking particularly of one scene near the beginning of the book where Gertrude’s birdcage bustle begins to spectacularly fall apart AND she gets stuck on a settee …. and then behind it. In the middle of a yacht party to celebrate Permilia & Asher’s engagement. Because, of course it is. Classic Jen Turano fun – and easily something that would have made a fabulous Carol Burnett Show sketch too. Oh… and then a scene where Harrison is trying to be chivalrous (under Asher’s questionable tutelage) and… well… let’s just say it doesn’t go as planned.

“There’s no cause to embarrass a person either, but that didn’t stop you from sending me off to a formal engagement celebration wearing a birdcage attached to my behind.”

Bottom Line: I do so love a friends-to-more romance, particularly for those aha moments where they each realize what everyone else has seen all along – that they’ve fallen in love. And because this is a Jen Turano novel, we also get to giggle a lot while we wait for those aha moments. Both Harrison and Gertrude have a tender side – as well as a healthy sense of humor and a hefty dose of unique quirkiness for each – and it’s this combination that makes them such good friends as well as a delightful love match. Another fun Gilded Age romp from this author. 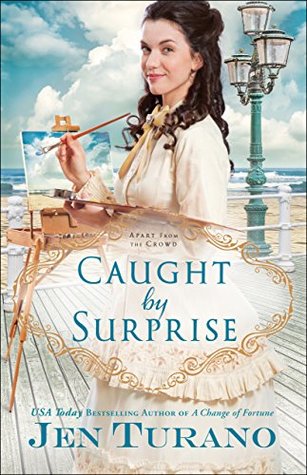 After years of hiding her true nature, Miss Temperance Flowerdew is finally enjoying freedom outside of the shadow of her relations, so the last thing she expected on her way to work was to be grabbed off the street by a stranger and put on a train bound for Chicago.

When Mr. Gilbert Cavendish is called upon to rescue a missing woman, he follows the trail to Chicago only to discover that the woman is his good friend, Temperance. Before they can discover who was behind her abduction, they’re spotted alone together by a New York society matron, putting their reputations at risk.

Even though Gilbert is willing to propose marriage, Temperance is determined not to lose her newfound independence. But when the misunderstanding in Chicago escalates into a threat on her life, accepting Gilbert’s help in solving the mystery may lead to more than she ever could have dreamed.

“How is it possible I forgot what an interesting place your mind is?”

Rounding out this series of wallflowers who find their own voice – and a happily-ever-after in the process – is Caught By Surprise and we finally get Temperance’s story. And what a story it is! In fact, it’s almost like Turano pulled out all the stops for this final book of the series and threw in several tropes at once. Friends-to-more. Impending marriage-of-convenience. Destitute, orphaned heiress. Noble hero. Mistaken identity. Bumbling henchmen. Nefarious villains. Miss Snook’s School for the Education of the Feminine Mind. Almost Oscar Wilde-ish in its mayhem and hilarity. At one point it’s almost farfetched but you’re having too much fun with these characters to care, and you happily suspend disbelief when needed.

Bottom Line: The strength of Caught By Surprise lies in its supporting characters this time around, though Temperance and Gilbert are certainly delightful protagonists. I loved watching their childhood friendship reconnect, their genuine affection and love for each other developing into romantic love much as we saw with Harrison & Gertrude in Out of the Ordinary. I also loved watching Temperance blossom into who she was always created to be. Still, it’s the ragamuffin pack of secondary characters that made this story so enjoyable for me – Miss Henrietta, Miss Mabel, Miss Snook, Mr. Barclay, and most definitely the brother-sister team of Eugene and Mercy. Hilarious and endearing, they add further dimension and emotion to the story, and I would love hanging out with them all again sometime. 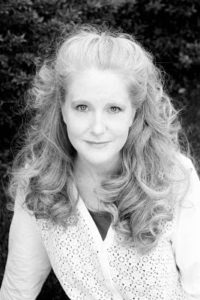 Named One of the Funniest Voices in Inspirational Romance by Booklist, Jen Turano is a USA Today Best-Selling Author, known for penning quirky historical romances set in the Gilded Age. Her books have earned Publisher Weekly and Booklist starred reviews, top picks from Romantic Times, and praise from Library Journal. She’s been a finalist twice for the RT Reviewers’ Choice Awards and had two of her books listed in the top 100 romances of the past decade from Booklist. When she’s not writing, she spends her time outside of Denver, CO.


Other Books by Jen Turano

What about you? What interests you most about the Apart From the Crowd series by Jen Turano? If you’ve already read the series, which character was your favorite?

8 responses to “Book Series Review: Apart From the Crowd series by Jen Turano”