Today’s first book is The Runaway Bride by the fabulous Jody Hedlund + a swoonilicious excerpt that you seriously need to read from the safety of the nearest freezer or snowbank 🙂 I’m still fanning! 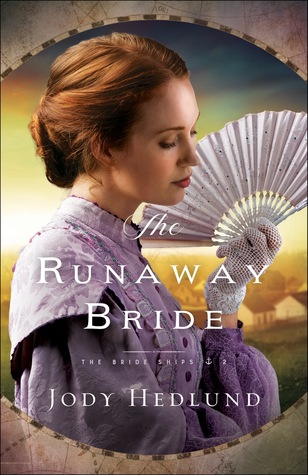 Haunted by Mistakes in Her Past, Will She Ever Again
Trust Her Heart to Another?

Wealthy Arabella Lawrence flees to British Columbia on a bride ship, still bearing the scars of past mistakes. One of the few single women in the boomtown, she immediately attracts suitors, but she is determined not to find herself trapped again by making a poor choice.

Vying for her hand are two very different men. Lieutenant Richard Drummond is a gentleman in the Navy, held in high esteem. Peter Kelly is the town’s baker who has worked hard to build a thriving business. He and Drummond not only compete for Arabella’s affections, but also clash over their views of how the natives should be treated in the midst of a smallpox outbreak.

As Arabella begins to overcome her fears, she discovers someone in dire need–a starving girl left behind by her tribe. Intent on helping the child, Arabella leans on Peter’s advice and guidance. Will she have the wisdom to make the right decision, or will seeking what’s right cost both her and Peter everything?

“The Runaway Bride is an uplifting and well-crafted second installment in Hedlund’s Bride Ships series. Hedlund has a knack for creating unlikely yet alluring matches. . . . Period details, such as relations with local Native Americans and a smallpox epidemic, help immerse readers in the story’s 1862 world of cultural, class, and gender injustices. Tender moments of light sensuality infuse this inspirational romance with delectable heat.”—Booklist starred review

She tore her sights from his chest and lifted her eyes to find that he was watching her. She knew she ought to be mortified he’d caught her admiring him. He was already too boastful and didn’t need her or any other woman adding to his self-pride.

Yet his expression didn’t contain a hint of the teasing or humor she’d expected. Rather, his eyes were dark and serious and laden with bold desire.

Her breath hitched in her chest, and a flurry, like that of a bird beating its wings, unleashed in her middle, filling her with a wanting, almost like an aching need.

His sights dipped to the rise and fall of her chest, which she realized was heavy and unsteady. She lifted a hand and pressed it against her bosom to calm her breathing, only to realize her fingers were trembling.

When his gaze collided with hers again, the heat smoldered into her, searing a trail through her blood, making her want to be with him, near him, against him—without anything holding them back.

“Young man, I’m still awake” came Blind Billy’s crusty voice from the corner. “So don’t think you can get away with any hanky-panky.”

As though waking from a dream, Arabella first cupped her hands against her flaming cheeks. Then she spun and reached for the nearest item—heedless of the fact that it was one of the iron cylinders used in weighing the bread.

“Sorry to disappoint you,” Pete retorted calmly, “but there’s no hanky-panky going on here.”

The older man snorted. “Could have fooled me. There’s more heat in this room now than when the ovens are a-blazing.”

The room was hot. Arabella shifted the iron weight from one hand to the next. Then she set it down and grabbed a spatula, flapping it in front of her face like a fan. She shouldn’t have been staring at Pete so openly or with such interest. What was wrong with her? Hadn’t she chastised herself a short while ago about maintaining high standards and behaving as a lady?

“Can’t help it if I set hearts ablaze,” Pete said, his voice finally taking on the teasing tone she was used to. 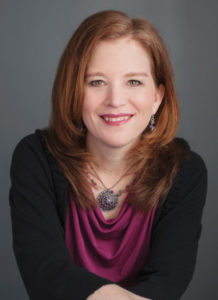 Jody Hedlund is the author of over twenty historicals for both adults and teens and is the winner of numerous awards including the Christy, Carol, and Christian Book Award. 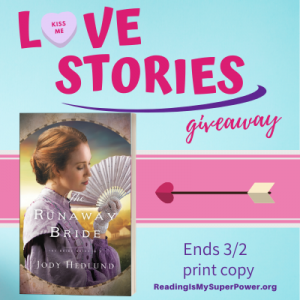 Jody Hedlund is offering a print copy of The Runaway Bride to THREE of my readers! (US only. Void where prohibited by law or logistics.) This giveaway is subject to Reading Is My SuperPower’s giveaway policies which can be found here. Enter via the Rafflecopter form below.


What about you? What interests you most about The Runaway Bride?