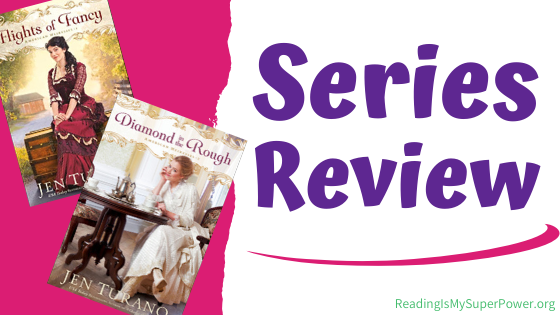 Today I’m continuing my ‘reviews from the teetering TBR pile‘ with the two last books I still need to review for Jen Turano – which also happen to be the first two books in the American Heiresses series –  Flights of Fancy & Diamond in the Rough. 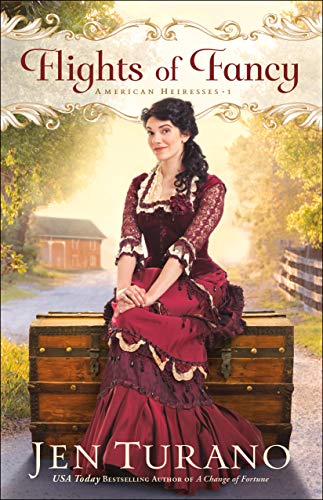 Miss Isadora Delafield may be an heiress, but her life is far from carefree. When her mother begins pressuring her to marry an elderly and uncouth duke, she escapes from the high society world she’s always known and finds herself an unlikely candidate for a housekeeper position in rural Pennsylvania.

Mr. Ian MacKenzie is known for his savvy business sense and has built his reputation and fortune completely through traditional hard work. But when his adopted parents are in need of a new housekeeper and Isadora is thrown into his path, he’s unexpectedly charmed by her unconventional manner.

Neither Isadora nor Ian expected to find the other so intriguing, but when a chain of mysterious incidents on the farm point to a larger threat, they’ll have to set aside everything they thought they wanted for a chance at happy-ever-after.

“A woman who doesn’t like chickens isn’t to be trusted.”

A manor by any other name is a farm, an unfortunate truth that Izzie learns quickly after being dropped off at Glory Manor. Between Buttercup the cow wandering through the house, a hen named Elmer that likes to peck at Izzie’s ankles, goats eating the laundry, and an apparently-confused but endearing Uncle Amos who chases people with a rifle and accuses them of being chicken murderers, this heiress hiding out as a housekeeper (without a clue how to even boil water) is smack in the middle of what I can only describe as my worst nightmare – but hilarious when happening to someone else.

“She’d also not been expecting to find herself deposited on what seemed to be some type of farm, complete with chickens running amok and a cow standing on the front porch.”

Which means I laughed pretty much from start to finish, sweet message and heartwarmingly tender scenes notwithstanding. The adorable orphans (especially precious Daisy), Aunt Birdie, and Uncle Amos were the perfect supporting characters for this special brand of Turano-orchestrated mayhem. And when I wasn’t laughing, I was swooning over Ian who is my favorite Jen Turano hero – not the least of which reason is because he considers himself smitten with the written word.

“The sight of that grin stole the breath right out of her chest, robbing her of anything remotely sophisticated she might have wanted to say to him and leaving her feeling nothing like the cultured society lady she’d always prided herself on being.”

Bottom Line: Flights of Fancy gave In Good Company some close competition for the position of my fave Jen Turano novel. In the end, Millie Longfellow & In Good Company did just edge it out to retain the title, but it was a tight race. Endearing characters, swoony romance and madcap hilarity share the page with a touching reminder that one can be rich in many things besides money – and poor in many things even with great monetary wealth. 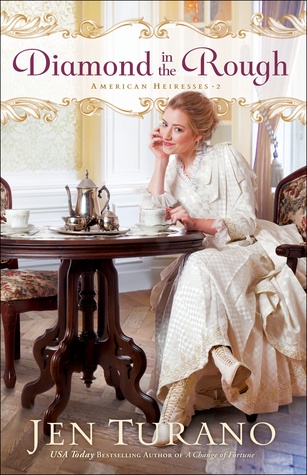 When Miss Poppy Garrison accepts her grandmother’s offer of financial help for her family in exchange for Poppy joining the New York social season, she quickly realizes she is far less equipped to mingle with the New York Four Hundred than even she knew. As she becomes embroiled in one hilarious fiasco after another, becoming the diamond of the first water her grandmother longs her to be looks more impossible by the day.

Reginald Blackburn, second son of a duke, is in New York to help his cousin find an American heiress who can help save his family’s estate. But when his very proper British manners lead Poppy’s grandmother to request he teach etiquette to Poppy, he quickly finds himself in for much more than he bargained for.

And while they couldn’t be more opposite, Reginald and Poppy just might find they have more to teach each other than they ever could have expected.

“He loved her. It was as simple as that, even though she was the most exhausting and exasperating lady he’d ever met in his life.“

For all that I immediately engaged in Izzie’s story in Flights of Fancy, it took me a while to get into Diamond in the Rough. I liked Poppy immediately – and admired her for her pluck and determination even when she’s the center of attention for all the wrong reasons. I also liked Reginald right away, despite his rather stodgy name, because even though he is also stodgy I saw his potential right away. Plus he’s swoonily British and finds Poppy fascinating – both additional points in his favor. So I’m not exactly sure why I had a hard time connecting with the book, other than just mental fatigue after a long week.

However, once I got over my initial lack of enthusiasm, I became immersed in the true heart of the story and enjoyed watching Poppy set the New York 400 – and Reginald, too – off kilter. She’s such a genuine character with a big heart, and my heart smiled with the emphasis on social justice that Turano wove effortlessly into this story, even when Poppy hilariously set even that a bit off kilter too. Seeing Reginald all ruffled by Poppy’s persistence in discussing undergarments, her magnetism for mayhem, and the way she’s tumbling her way into his heart is deliciously swoony… and Diamond in the Rough wins the award for my favorite kissing scene by this author. Keep a fan handy for that one!

Bottom Line: While I wasn’t a fan of Diamond in the Rough at first, I ended up completely enjoying the story after all. Which is appropriate, given the title, I suppose. Poppy and Reginald are such great characters – and the banter between them will keep you grinning besottedly throughout. Poppy’s family unexpectedly grew on me as the story progressed, and I loved the cameo from Miss Mabel & references to beloved characters from Turano’s previous books. And Murray! Oh I loved Murray. What a hoot. Another fun misadventure through the ridiculousness of the Gilded Age.

My Rating: 4 stars / enjoyed it

Book #3 in the American Heiresses series! 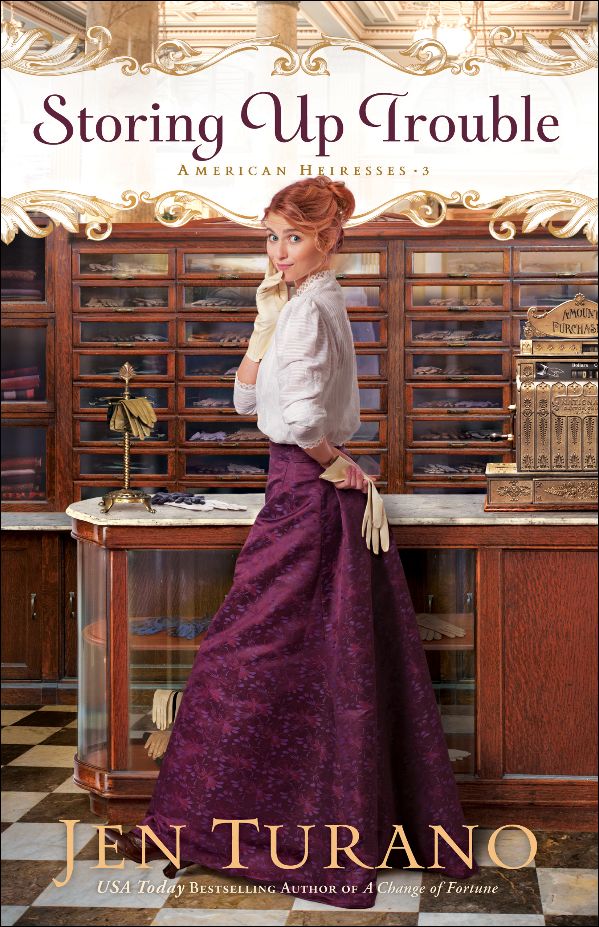 When Beatrix Waterbury’s train is disrupted by a heist, scientist Norman Nesbit comes to her aid. After another encounter, he is swept up in the havoc she always seems to attract–including the attention of the men trying to steal his research–and they’ll soon discover the curious way feelings can grow between two very different people in the midst of chaos. 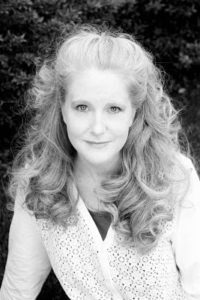 Named One of the Funniest Voices in Inspirational Romance by Booklist, Jen Turano is a USA Today Best-Selling Author, known for penning quirky historical romances set in the Gilded Age. Her books have earned Publisher Weekly and Booklist starred reviews, top picks from Romantic Times, and praise from Library Journal. She’s been a finalist twice for the RT Reviewers’ Choice Awards and had two of her books listed in the top 100 romances of the past decade from Booklist. When she’s not writing, she spends her time outside of Denver, CO.

What about you? What interests you most about the American Heiresses books – Flights of Fancy, Diamond in the Rough and/or Storing Up Trouble?