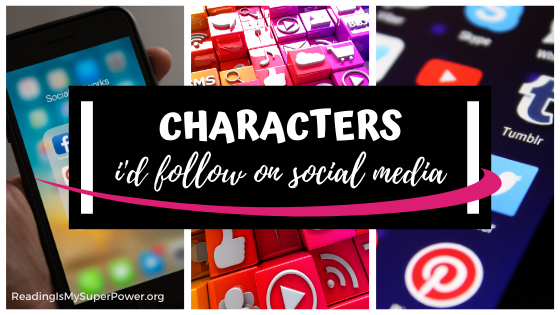 Happy Tuesday! Today’s Top Ten Tuesday theme is ‘characters I’d follow on social media’ and I have to confess that I almost skipped this prompt because my brain is just worn out and it felt like it would be too complicated to be creative lol. But then a few characters came to mind… and I was able to round out the list with 10, thanks to a little help from my book sisters. So yay!

This one is a no-brainer. Melody from Brunch at Bittersweet Cafe by Carla Laureano has an instagram account in the story – where she pairs novels with yummy pastries & desserts. I mean, I’d be hungry all the time BUT there’s also books. So it’s a win in the end.

I know the Amish aren’t supposed to use social media… but I just know Aunt Bitsy (from several Jennifer Beckstrand books) has a Twitter account. From where she tweets such pearls of wisdom as “Never kill a bee. They’re the future of the human race.” or “Boys are like stray cats. If you feed them, they’ll keep showing up on your porch.”

Between squishing grandpas and her crazy, wonderful family and her hunky hero, Eisley Barrett from Pepper Basham’s Just the Way You Are would be a lot of fun to be friends with on Facebook. I can see countdowns to her next trip across the pond, FB live tours of the Harrison’s estate and readings of those long lost letters, family antics, discussion on Appalachian dialect vs. British, hmm… kinda sounds like the author’s FB account 😉

Allegra Spencer from Count Me In by Mikal Dawn would be super fun to follow on Instagram. For starters, she’s my people. For nexts, her feed would be full of fun coffee pics, documentation of all the crazy adventures her swoony hero Tyler talks her into, general sass & hilarity, and even meaningful Scripture memes.

I would absolutely want to be friends with Bethany Turner’s Sarah Hollenbeck – in real life and on social media. Getting a front row seat as she transforms from author of smutty romances to a follower of Jesus … who just happens to also fall in love with her pastor… would be hilarious and endearing and outright fun. Just like the book and just like its author.

Judah from Cynthia Ruchti’s Miles From Where We Started is only eleven so he probably shouldn’t have a social media account but who are we kidding, he definitely does. (I did withhold his last name, however, since he’s a minor… and because I can’t remember it LOL) I would love to follow this precocious kid on Instagram as he documents road trips and life with his dry wit and tween charm.

Aunt Bess may only be a secondary character in Gayle Leeson’s Down South Cafe mystery series but I absolutely wish her Pinterest boards were both real and followable. With boards like ‘Lord, have mercy’ and ‘people I’ve outlived’ her account would be one of my top ten faves for sure.

Oh Jellybean! A terror of a terrier from Paws For Love, but adorable nonetheless. He also resembles author Dana Mentink’s own dog, Junie, so I have a feeling that Jellybean’s Instagram feed would be full of Houdini escape tricks, things he’s not supposed to eat (but did anyway), and people he’s brought together in the course of his regular mischief.

I honestly don’t remember if Megan Jacobs used social media in The Heart Between Us by Lindsay Harrel, but I think that following Megan via Instagram on her bucket list trip with her sister would be a lot of fun. After all, her multi-country, multi-cultural adventures were fun to experience vicariously on the page, so I’m sure that would translate just as well to the smartphone app. Especially if Caleb makes an occasional (or more than) appearance 😉