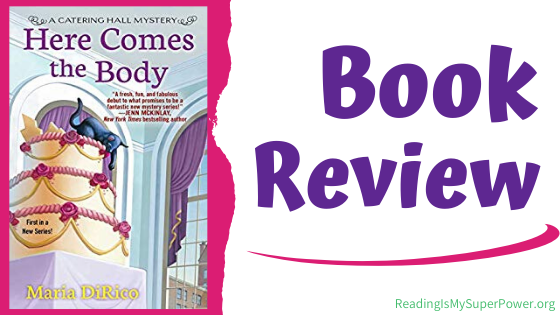 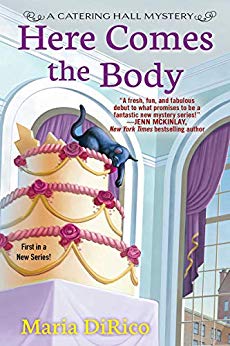 After her philandering husband’s boat went down, newly single Mia Carina went back to Astoria, the bustling Queens neighborhood of her youth. Living with her nonna and her oversized cat, Doorstop, she’s got a whole new life–including some amateur sleuthing . . .

Mia is starting work at Belle View, her father’s catering hall, a popular spot for weddings, office parties, and more–despite the planes that occasionally roar overhead on their way to LaGuardia and rattle the crystal chandelier. Soon she’s planning a bachelor party for a less-than-gentlemanly groom. But it goes awry when the gigantic cake is wheeled in and a deadly surprise is revealed . . .

Since some of her family’s associates are on the shady side, the NYPD wastes no time in casting suspicion on Mia’s father. Now, Mia’s going to have to use all her street smarts to keep him out of Rikers Island . . .

A teddy bear of a mobster trying to stay on the straight and narrow. A daughter recovering from a disastrous end to a problematic marriage, coming home to work with her dad at a rundown catering hall in Queens. A true Italian nonna who is delightfully endearing even with all her spitfire feistiness. A mob Family you can’t really ever leave. A murder at a bachelor party. All of these ingredients – combined with a host of other colorful supporting characters (Cammie!) – add up to a fun, if a bit edgy, new cozy mystery.

Mia is a character I liked immediately – she’s very multi-dimensional, and the author reveals new layers to Mia’s story as the plot unfolds. I also loved her father Ravello and her grandmother. Both characters are vividly-drawn and full of personality, and they helped us see Mia in different lights as well as advanced the story in their own ways. Another highlight of this book is the Astoria neighborhood where Mia and her grandmother live – the camaraderie, the diversity, the friendly (sort-of lol) rivalries, the Army (a bunch of elderly ladies) who power-walk (gossip) regularly, and the clear respect by the author for these kind of long-established neighborhoods. It made me long to live somewhere like that too.

The plot is full of twists and turns and red herrings, as Mia deals with all the craziness of event planning in a catering hall owned by the mob even as she also tries to clear her father’s name in the murder. It’s well-developed and nicely thought out, and while I wasn’t surprised by the ending necessarily I also didn’t have it figured out until the reveal was nearly upon us.

Bottom Line: Colorful and quirky characters give this book its heart, and I’m looking forward to keeping up with this motley crew as the series continues. It took a bit for me to assure myself that I was indeed reading the first book, since Mia’s backstory often read like it was summing up something I was expected to already be familiar with.  Still, overall I enjoyed the tone of the book and the stage it sets for future installments of the Catering Hall Mysteries.

Reviewer’s Note: Keep in mind that, by nature of the story & characters, there are some racier elements to this cozy mystery – innuendo, suggestive language, a stripper, etc. – but it never goes beyond that and there were only a couple of curse words, too. 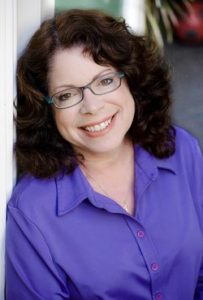 Maria DiRico was born in Queens, New York, and raised in Queens and Westchester County. She is a first-generation Italian-American on her mother’s side. On her father’s side, her grandfather was a low-level Jewish mobster who disappeared in 1933 under mysterious circumstances. She also writes the award-winning, bestselling Cajun Country Mystery series under the name Ellen Byron.

What about you? What interests you most about Here Comes the Body?

9 responses to “Book Review (and a Giveaway!): Here Comes the Body by Maria DiRico”