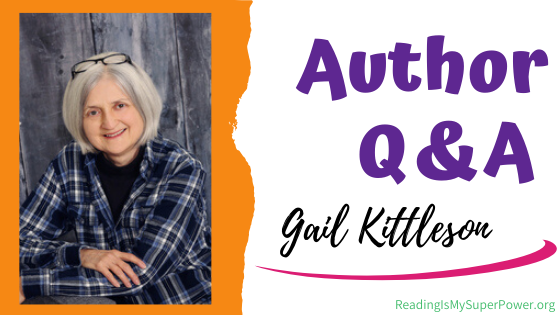 Please join me in welcoming Gail Kittleson to the blog to chat about her newly re-released WW2 historical romance, In Times Like These! 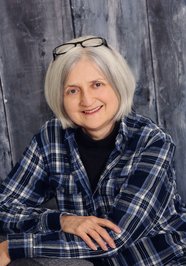 An Iowa farm girl (baby boomer),Gail Kittleson appeared with her thick glasses at the local library counter every Saturday of her childhood and hauled home a new pile of books. Later, she earned her MA in TESOL and taught English as a Second Language and college expository writing.

Over a ten-year period, Gail’s memoir developed, and another is presently with a publisher. Since the World War II bug bit her, she’s never been quite the same. Her Women of the Heartland fiction brings to life this challenging era’s make-do women whom she loves to introduce to new readers.

Gail’s husband Lance shares her delight in historical research, their grandchildren, gardening in Northern Iowa, and hiking under Arizona’s Mogollon Rim in winter.

Gail: I choose tea over coffee, hands down, although I love coffee’s rich smell. Coffee tastes so bitter, I can’t think of a good reason to drink a cup. Tea provides warmth, comfort, caffeine if I need it, AND great taste.

Carrie: If only coffee tasted like it smelled lol (but I think tea is just as bitter. Bring on the hot chocolate!)

Gail: Mountains over oceans, although the ocean intrigues me and has such beauty to offer. I guess the majesty of towering peaks does more for my love of nature.

Gail: Print books are my cup of tea—I’ve never read the other kind, and most likely won’t, although I’ve learned (I think) to never say never. Who knows what technology might offer for aging eyes some day?

Carrie: I love print books, too, but oh my goodness with all the reading I do for review, etc. it is SO NICE to enlarge the font on my kindle to prevent eye fatigue!

Gail: While a good old Hallmark movie can still warm my heart, the predictability keeps them from being a steady diet. I’d rather learn something about history, which Netflix provides.


Carrie: I watch the Hallmark mysteries channel which at least is a bit less predictable lol

Gail: Hmmm.  Apart from faith, I think my superpower would be tranquility, though it’s tough to separate the two. By tranquility, I mean the serenity that descends when all the unnerving voices in my head are shut out and replaced with thoughts and words of hope and peace.

My characters need this inner serenity, too. Whether they’re facing great loss, big decisions, or terrible danger, serenity makes all the difference.


Carrie: That peace that passes understanding…


Q: When you enter a bookstore, where do you head first?


Gail: In a bookstore, I head straight to the history section and search for biographies and historical fiction. I also enjoy the colorful array of children’s picture books.


Carrie: I love hanging out in the picture book section – I nearly majored in children’s literature in college.


Gail: The weirdest topic I’ve ever Googled while researching a book . . . depends what sense of “weird” we’re using, but one interesting discovery was the reason for the rise in carrot usage during World War II. Had to do with the war ministry emphasizing that eating carrots (Vitamin A-1) would definitely sharpen one’s night vision. This idea was propagated because a man named Cunningham shot down so many German planes at night, with the help of A-1 . . . short for radar, and the ministry wanted to keep that under wraps.

Carrie: hahaha i never knew that! How interesting!


Q: Which of your heroines has been the most difficult to write?


Gail: Dorothy in Until Then was the most difficult to write, because she was a real WWII nurse from Iowa, and her family supplied me with so much information about her tremendous service in the Eleventh Evacuation Hospital.  I wanted to be sure to use every truly important tidbit, and worried that I would disappoint her loved ones.  With a fictional character, no such anxiety exists!


Q: Was there anything about In Times Like These or your characters that surprised you as you wrote this story?


Gail: The versatility of Addie, the heroine of In Times Like These, struck me as a trait to be honed and surprised me a little.  Although Addie was often motivated by deep fears, she found ways of working through her challenges. Her gradual move from fear to faith and confidence proved extremely rewarding for me.

Probably Addie is more like me than any other character of mine, because I’m no stranger to growing out of a fear-based worldview. This journey can be so daunting, since the roots of fear were planted in us so long ago and have a fearsome tenacity to remain entrenched. Every small step of progress counts for a lot!


Q: What is one of your favorite quotes from In Times Like These, and why do you love it?

Gail: “Every woman has a right to something of her own but it takes us time to figure out what that is.”  Jane, Addie’s older neighbor lady, says this to Addie when she comes into an inheritance she must keep secret from her husband. This creates discomfort for Addie, since she grew up impoverished and now, Harold handles all the money . . . how can it be that a wife can claim something apart from her husband? This is my favorite quote because Jane remains adamant about this principle, even though Addie needs time to digest and embrace the concept.

Gail: Another author and I might be compiling a book about World War II and FOOD. There’s such a wealth of information and personal stories, we’ll need to make lots of decisions about what to include.  This project will be a learning experience, for sure!

Carrie: That sounds like a lot of fun to read! 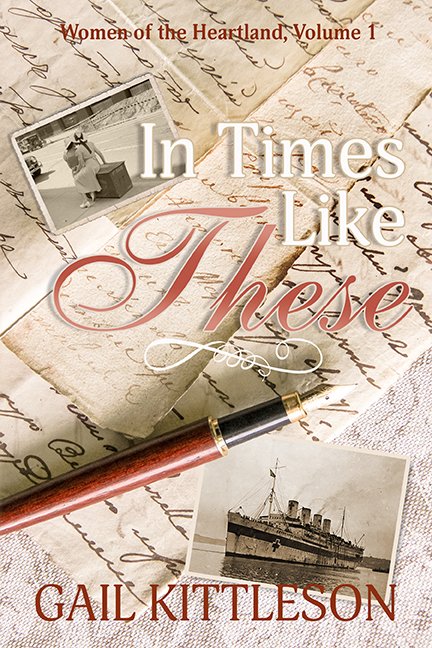 July 7, 1937  The Marco Polo Bridge Incident results in a prolonged war between China and Japan.

Over the next 15 months at least 35 nations were embroiled in the Second World War.

The Imperial Japanese Navy launched a surprise attack on the U.S. base at Pearl Harbor, killing 2,403 Americans, wounding 1,143, and destroying 18 naval ships including five battleships.

In Iowa, the Heartland of America, best friends Addie and Kate are embroiled in their own private wars. Kate’s pilot husband has gone Missing in Action, and Addie’s overbearing and controlling husband vents his rage on her. Somehow, these heroic Women of the Heartland must find a way to overcome the adversities of the war without, and the war within. 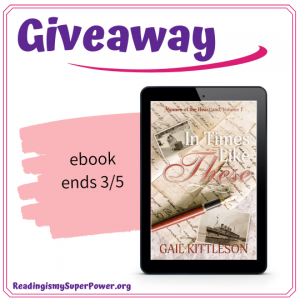 Gail Kittleson is offering an ebook of In Times Like These to one of my readers! (Open internationally except where prohibited by law or logistics.) This giveaway is subject to Reading Is My SuperPower’s giveaway policies which can be found here. Enter via the Rafflecopter form below.


What about you? What interests you most about In Times Like These or my Q&A with Gail Kittleson?

7 responses to “Author Interview (and a Giveaway!): Gail Kittleson & In Times Like These”