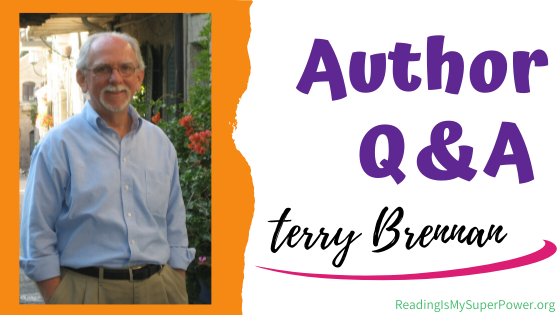 Please join me in welcoming Terry Brennan to the blog today to chat about his new book, Ishmael Covenant! 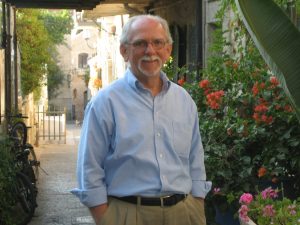 Terry Brennan is the award-winning author of The Sacred Cipher, The Brotherhood Conspiracy, and The Alepp Code, the three books in The Jerusalem Prophecies series. His new book, Ishmael Covenant is the first in his new series, Empires of Armageddon.

A Pulitzer Prize is one of the many awards Brennan accumulated during his 22-year newspaper career. The Pottstown (PA) Mercury won a Pulitzer Prize for Editorial Writing for a two-year series of editorials published while Brennan was the newspaper’s Editor.

Starting out as a sportswriter in Philadelphia, Brennan became an Editor and Publisher for newspapers in Pennsylvania, Illinois, and New York and in 1988 moved to the corporate staff of Ingersoll Publications (400 newspapers in the U.S., Ireland and England) as Executive Editor of all U.S. newspaper titles.

In 1996, Brennan transitioned into the nonprofit sector, spending 12 years as VP Operations for The Bowery Mission and six years as Chief Administrative Officer for Care for the Homeless, NYC nonprofits that serve homeless people.

Terry and his wife, Andrea, live in Danbury, CT. 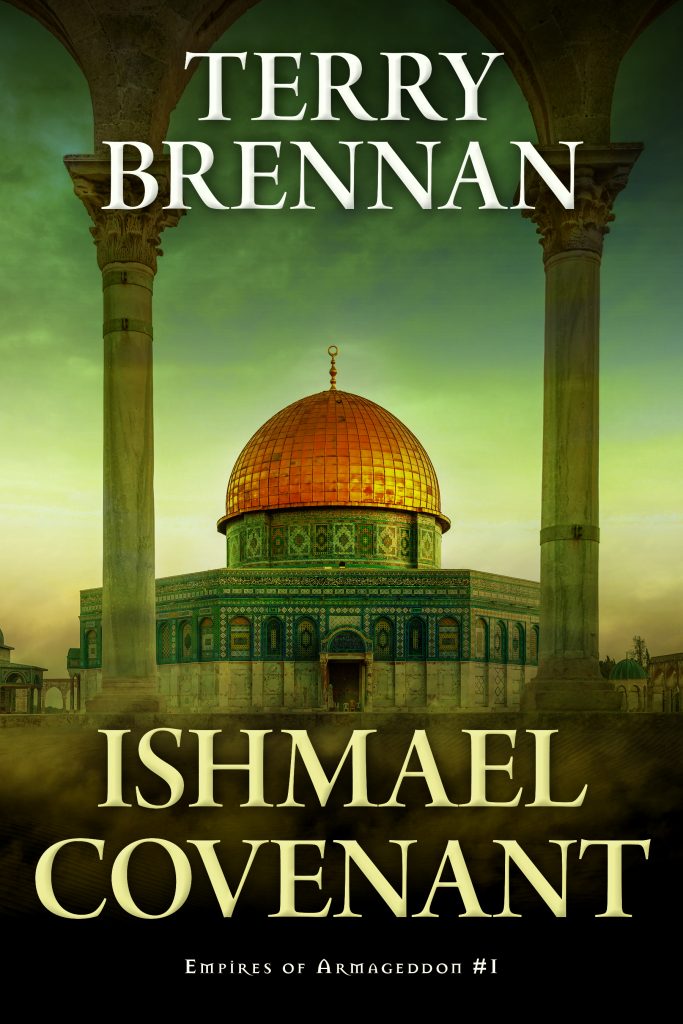 His marriage in tatters and his career ruined by lies, Diplomatic Security Service agent Brian Mullaney is at the end of his rope. Banished to Israel as punishment by his agency, he’s assigned to guard a US ambassador and an insignificant box. Little does he know that this new job will propel him straight into a crisis of global proportions.

Inside the box is a messianic prophecy about the fate of the world. And a dark enemy known as The Turk and the forces of evil at his command are determined to destroy the box, the prophecy, and the Middle East as we know it. When Ambassador Cleveland gets in the way, his life and his daughter’s life are threatened–and Mullaney must act fast.

Now agents of three ancient empires have launched covert operations to secure nuclear weapons, in direct defiance of the startling peace treaty Israel and its Arab neighbors have signed. And a traitor in the US State Department is leaking critical information to a foreign power. It’s up to Mullaney–still struggling with his own broken future–to protect the embassy staff, thwart the clandestine conspiracies, and unmask a traitor–before the desert is turned into a radioactive wasteland.

Fans of Joel C. Rosenberg, Steven James, and Ted Dekker will relish the deadly whirlpool of international intrigue and end-times prophecy in Ishmael Covenant–and will eagerly await the rest of this new trilogy.

Hi! Welcome to the blog!

Terry: Summer. A wonderful garden to lose myself in. And no snow to shovel.

Carrie: Which is basically winter in Kentucky lol

Terry: Over. Because my wife makes me.

Terry: Mountains. I hate sand in my sandwiches.

Terry: My first response was reading women’s minds. That way I would be better prepared for when topics are shifted at the speed of light without any visible connection. But that power could be a deadly minefield. Seriously … how about being able to heal children’s diseases at the touch of a hand?


Carrie: hahaha yes, best to keep the mystery when it comes to women’s minds 🙂 And I think your second choice would be a marvelous superpower to have!


Carrie: These are all on my teetering TBR tower! Can’t wait to read them.

Terry: When I started writing my first novel, my writing space was in one, small corner of our bedroom when Andera and I lived in the Bowery Mission on the Lower East Side of New York. We’ve moved three times since, and I managed to turn a spare bedroom into an office each time. But our home in Connecticut now has my best office, ever. Three walls are totally or partially covered in book cases that contain the books I’ve collected over the past four decades (many leather-bound antiques – singles and sets over 100 years old), the rest of the wall space covered in awards/memories/photos of my 22-year journalism career and lots of family photos. It’s warm and embracing, quiet, an imagination-island in our small home


Q: Which of your characters in Ishmael Covenant was the most difficult to write?

Terry: Joseph Atticus Cleveland (hero), US ambassador to Israel, is an African-American male. Noah Webster (villain), Deputy Secretary of State for Management and Resources, is an African-American male. I’m not. I think a white male needs to be very sensitive to portraying a world that is significantly different than what he has experienced. I’ve read several books that helped enlighten my understanding about racism in America. And I’ve relied heavily on my son-in-law, Azizi, to guide me in making sure my portrayal accurately reflected the reality of growing up and living as a black man in America. It caused me some anxiety because I wanted to ensure I got it right.

Carrie: Thank you for writing characters of color – and for doing the research and personal engagement to get it right!


Q: What surprised you about this series or your characters as you wrote their story?


Terry: I’m a gardener, not an architect. I plant a seed, water it, watch it grow. My characters always amaze me with their lives, their courage, their humility, their sense of duty – and sense of humor. More times than I can recount over the three-book series, Brian Mullaney’s story had me in tears. And Tommy Hernandez had me in stitches. I wrote the jokes, but they made me laugh as they came out of my fingers. I wrote the scenes, but the tears still fell as Brian revealed the pain of his love for his father and his faithful dedication in living for, and following, Our Father. It was a privilege getting to know them.


Q: What do you most want readers to take away from {YOUR BOOK}?

Terry: I hope that readers of Ishmael Covenant, and all the books of the EMPIRES OF ARMAGEDDON series, understand that Christians are in a real, tangible war. Believers in Jesus Christ are engaged in what the notes in my 1985 NIV Study Bible call a “titanic conflict”. (Ephesians 1:3 “heavenly realms”):

“… in the Christian’s union with the exalted Christ, ultimate issues are involved … At stake are God’s eternal eschatological purpose and the titanic conflict between God and the powerful spiritual forces arrayed against him …. As a result, the spiritual struggles of the saints here and now are not so much against ‘flesh and blood’ as against the great spiritual forces that war against God in heaven.”

I was struck by the idea that there are great spiritual forces that war against God in heaven. Interesting thought. More sobering is the idea that my ‘spiritual struggles’ here on earth have, in some way, an impact on that war in heaven.

Not all of us will come face-to-face with evil incarnate, as does Brian Mullaney and the other characters of Ishmael Covenant. But agents of evil are at work in the world today, just as they have been since Lucifer’s rebellion was crushed and banished to earth. It’s likely that there are two reasons why those agents of evil are still fighting against the light:

I don’t generally live my daily life conscious of the part I play in this great spiritual battle in heaven. I most often perceive the evil I face as personal. So, I pray against the spirits of evil that try to ‘steal, rob and destroy’ in my life, in my family, in our marriage. Which is good.

But, through research for this book, I’ve learned that I need to reach beyond the personal conflict of good and evil in my life and be more conscious of the vastness of this titanic conflict around me. I need to be an example, a reflection, of Jesus and his love for all souls. And I need to stand up for light – to be a warrior/ambassador for light – in the midst of a dark world that often seems to be getting darker.

But the bottom line is inevitable. Good triumphs. The end of the Book will never change.


Carrie: We know the end of the Story. Yes. Amen.

Terry: The empires of armageddon series continues in July, 2020 with the release of Book Two – Persian Betrayal, which picks up right where Ishmael Covenant finishes. The vast majority of this series primarily takes place over just a few weeks in July, 2014, so there is a single plot line developing and linking all three of the individual stories together. The third, and final, installment of the series, Ottoman Dominion, will be released in the spring of 2021. 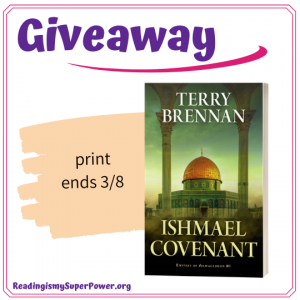 Terry Brennan is offering a print copy of Ishmael Covenant to one of my readers! (US only. Void where prohibited by law or logistics.) This giveaway is subject to Reading Is My SuperPower’s giveaway policies which can be found here. Enter via the Rafflecopter form below.


What about you? What interests you most about Ishmael Covenant and/or my Q&A with Terry Brennan?