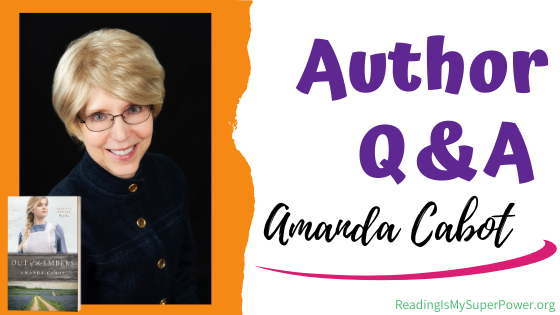 I’m thrilled today to welcome Amanda Cabot to the blog to chat about her new book, Out of the Embers, the first book in her new Mesquite Springs series! 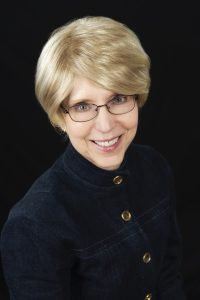 Amanda Cabot is the bestselling author of A Stolen Heart, A Borrowed Dream, and A Tender Hope, as well as the Texas Crossroads, Texas Dreams, and Westward Winds series. Her books have been finalists for the ACFW Carol Awards, the HOLT Medallion, and the Booksellers’ Best. She lives in Wyoming. Learn more at www.amandacabot.com. 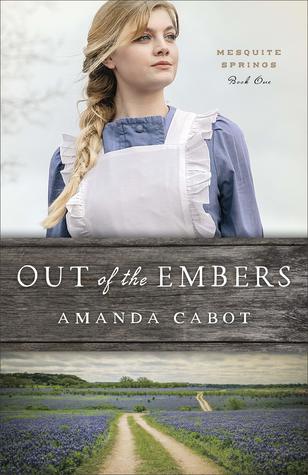 Ten years after her parents were killed, Evelyn Radcliffe is once more homeless. The orphanage that was her refuge and later her workplace has burned to the ground, and only she and a young orphan girl have escaped. Convinced this must be related to her parents’ murders, Evelyn flees with the girl to Mesquite Springs in the Texas Hill Country and finds refuge in the home of Wyatt Clark, a talented horse rancher whose plans don’t include a family of his own.

At first, Evelyn is a distraction. But when it becomes clear that trouble has followed her to Mesquite Springs, she becomes a full-blown disruption. Can Wyatt keep her safe from the man who wants her dead? And will his own plans become collateral damage?

Suspenseful and sweetly romantic, Out of the Embers is the first in a new series that invites you to the Texas Hill Country in the 1850s, when the West was wild, the men were noble, and the women were strong.

Hi Amanda! Welcome to the blog!

Q: What sparked the idea for your new book, Out of the Embers?

Amanda: I’ve always been fascinated by the way that events of the past shape us, so I started brainstorming worst-case scenarios. What if a young girl’s parents were murdered and she never knew why? What if she still felt as if someone was watching her and planning to kill her too, even though it’s been ten years? What if she narrowly missed being inside her new home when it was destroyed and everyone died? These were the seeds of Out of the Embers.


Q: Out of the Embers is set in a fictional small town in the Texas Hill Country. What inspired you to create a place like Mesquite Springs?

Amanda: By now, readers have probably figured out that I enjoy bringing small towns to life, particularly in the Texas Hill Country. The challenge for me is making each of my fictional towns different. After all, I wouldn’t want anyone to say “same old, same old” when reading one of my stories. What distinguishes Mesquite Springs from Ladreville and Cimarron Creek is that it’s experiencing a period of growth with new businesses and new people coming to town. Those people change the town’s dynamics—some in good ways, some in not-so-good ways—but they all make their mark on Mesquite Springs.


Q: Two of the main characters in Out of the Embers, Evelyn and Polly, are joined together through a fire that destroys their home. But, that’s not the only thing the two have in common. Can you tell us a little more about their relationship?

Amanda: Besides both being orphans, Evelyn and Polly share enough of a resemblance that when she flees after the orphanage is destroyed, Evelyn finds it easy to pretend that Polly is her younger sister. In truth, their relationship is more like mother and daughter than sisters, with Polly depending on Evelyn to make her fondest dream come true: finding her a new daddy.

Carrie: Each new thing I learn about this story makes me want to read it right now!


Q: Did anything surprise you as you were writing this novel?

Amanda: Yes, as a matter of fact. Although I plot my books before I begin the actual writing process and rarely make major deviations from those plots, this time when I was about half through the first draft, I realized that what I had envisioned for Wyatt’s life after the book ended wasn’t the right one for him. He needed to stay in Mesquite Springs, and he needed a compelling reason to stay. The mayoral race was the result of those realizations.


Q: Did you face any challenges in creating this story? What was the hardest scene to write?


Amanda: The biggest challenge was not revealing too much about the two men who are secondary characters too soon but still giving readers enough reason to care about what was going to happen to them.

I wouldn’t say that any one scene was particularly difficult to write, but perhaps that’s because I tend to agonize over every scene, trying to make it as close to perfect as possible.

Carrie: Which is what makes your books so good to read!


Q: Do you see parts of yourself in any of your characters?


Amanda: I’d like to claim that my characters are totally fictional, but the truth is that I, like all authors, bring parts of myself to each story. The fact that I’m the oldest of four children made Evelyn’s almost parental relationship with Polly an easy one for me to write.


Carrie: I bet that did help!


Q: What do you most want readers to take away from Out of the Embers?

Amanda: As always, I hope they’ll finish the book with a smile on their faces, a renewed belief in the healing power of love, and the knowledge that God can—and does—answer prayers.

Amanda: I’m currently writing the second book in the Mesquite Springs trilogy. Although we don’t have a final title, I can tell readers that Dorothy, whom they’ll meet in Out of the Embers, gets her chance at a happy ending. It’s not easy, though, because the town is disrupted by the arrival of a man determined to establish Mesquite Springs’s first newspaper and an itinerant artist with an agenda of his own.

Carrie: See? now i want to read that one right now too! lol 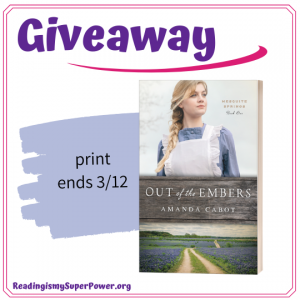 Revell is offering a print copy of Out of the Embers to one of my readers! (US only. Void where prohibited by law or logistics.) This giveaway is subject to Reading Is My SuperPower’s giveaway policies which can be found here. Enter via the Rafflecopter form below.


What about you? What interests you most about Out of the Embers by Amanda Cabot?

25 responses to “Author Interview (and a Giveaway!): Amanda Cabot & Out of the Embers”