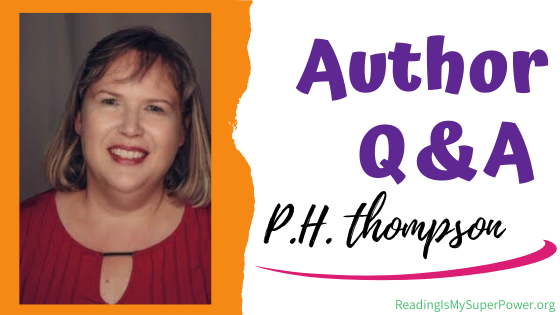 Please join me in welcoming author P.H. Thompson to the blog to chat about her debut novel Benaiah: Mighty Man of God! 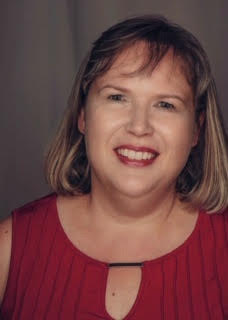 P.H. Thompson is a former oncology nurse who turned to writing. When not writing, she leads women’s Bible studies, speaks at women’s conferences, spoils her active grandchildren, and takes long naps to recover. She and her husband live near Toronto, and have two adult daughters.

She is a member of The Word Guild, Canada and ACFW; American Christian Fiction Writers. You can connect with her, get signed copies of her novel, and find out about upcoming projects at her website, phthompson.com or her facebook page, P.H. Thompson, Author, read her blog, the-scarlet-thread.com or follow her on Instagram phthompson.author or follow her podcast Bible Companion Series on podcasts.com.

Benaiah: Mighty Man of God is her debut novel. 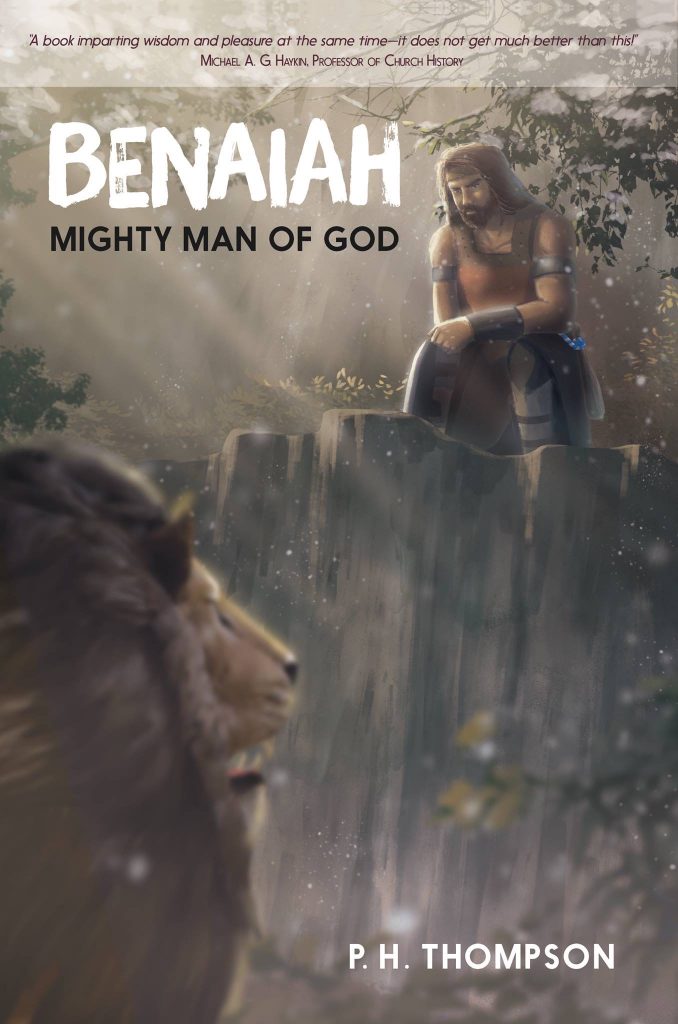 What happens when the king’s most obedient soldier is issued a wicked command?

Benaiah is valiant against men and beasts. He is known for three heroic deeds that lead to his appointment in the elite force of David’s Mighty Men: aggressively going down into a pit on a snowy day to kill a lion; fighting two Moabite ariels; and challenging a giant Egyptian, armed with only a staff, and killing him with the man’s own spear. When David is crowned king, Benaiah is made his chief bodyguard and eventually head of the whole army of Israel under King Solomon.

Reeling from the tragic cost of disobedience when he was young, Benaiah directs his life toward one chief aim: to be found a faithful, loyal, valiant and obedient soldier, servant of the King and follower of Yahweh.

But when “just following orders” leads to his part in adultery, murder and death, he questions his life’s direction. If both obedience and disobedience cause death, how can he ever find redemption?

P.H: Summer, for sure. I was born in Finland, and grew up in Northern Ontario, but I’m a summer girl. Also, now that I have some chronic illnesses, my symptoms are worse in winter, so I love the warmth and sunshine.

Carrie: I think you may be the first person I’ve ever ‘met’ from Finland! How fun!

P.H: Coffee. I’ve been drinking it every day since I was five, except for when I was pregnant. It’s a Finnish thing; we are the largest consumers of coffee per capita, so I’ve gotta represent.


Carrie: I had no idea that Finland consumed that much coffee!

P.H: Ocean, or any lake. I just find it so much more relaxing to be near water.


Carrie: The water IS super relaxing (though I prefer the mountains … or even better, a mountain creek!)

P.H: If you saw my library, you’d know the answer to that. However, since I got sick, concentration was difficult, as was retention, and having my e-reader read to me became the only way I could keep reading, even if it wasn’t the quantities I used to read each year.


Carrie: I can totally relate to that with my own chronic illnesses…

P.H: If I had a superpower, it would be to breathe underwater. I always admired Aqua-Man, until they changed his look for the movie, which they didn’t do for any other superhero (don’t get me started). I look forward to heaven when we’ll be able to explore without fear of some of the creatures of the deep.


Carrie: ooo i love that last sentence – I hadn’t thought of that before. What a great thought!

Carrie: I love that you have a king crush haha!


Q: What’s the weirdest thing you’ve ever googled while researching a book?

P.H: Concubines, for research into David’s family life for Benaiah: Mighty Man of God. I didn’t understand how there could be anything positive about such an arrangement, but then a woman alone in that culture had no support, financially or otherwise.

Carrie: True. Definitely a very difficult time to be a woman.

P.H: Well, since I have many unfinished books that are the result of flying by the seat of my pants, and my finished book is the result of outlining, I’d have to say I’m a converted pantser, and will only plot my novels from now on. In fact, because I outlined my second novel, with the help of K.M. Weiland’s book Outlining Your Novel, I was able to write the first draft in a month, and won NaNoWriMo, or National Novel Writing Month in November 2019!


Q: What do you most want readers to take away from Benaiah: Mighty Man of God?

P.H: A few things. First, I hope my readers will first of all just enjoy the story and imagine themselves there with Benaiah, at David’s side.

I want these familiar stories to come alive and have readers think about some of the deeper issues the story brings out, like grace, faithfulness in marriage, consequences of sin, and God’s sovereignty.

I want them to feel his ethical dilemmas along with him. Even though three thousand years separate us, people are still the same. He struggled with many of the same issues as you and I do. We want God to accept us. Is it just about obedience? What role does grace play?

I want the story to drive them to Scripture to re-read these events and picture Benaiah there as they happen. I want them to see the people in Scripture as real people. For those unfamiliar with these stories, or for those who might never open a Bible, I think it will surprise them to see that all these things are there in Scripture to teach us and to show that there is forgiveness even for scarlet sins like adultery and murder.

And as one of my endorsements says, I want it to be a book “imparting both wisdom and pleasure at the same time.”

Carrie: I love that. Yes!


Thank you so much for taking time to talk with me! 🙂 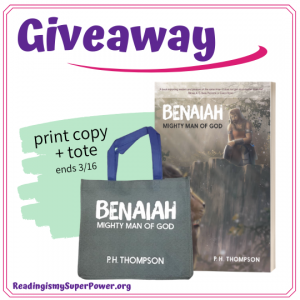 P.H. Thompson is offering a print copy of Benaiah: Mighty Man of God + a tote to one of my readers! (US/CAN only. Void where prohibited by law or logistics.) This giveaway is subject to Reading Is My SuperPower’s giveaway policies which can be found here. Enter via the Rafflecopter form below.


What about you? What interests you most about Benaiah: Mighty Man of God and/or my Q&A with P.H. Thompson?