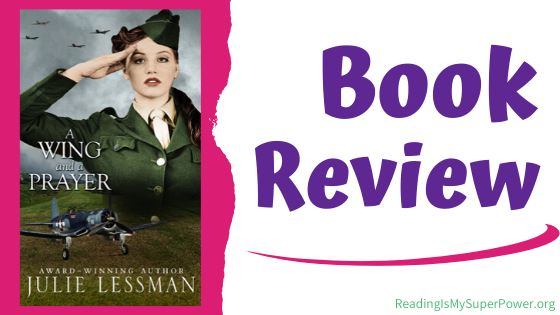 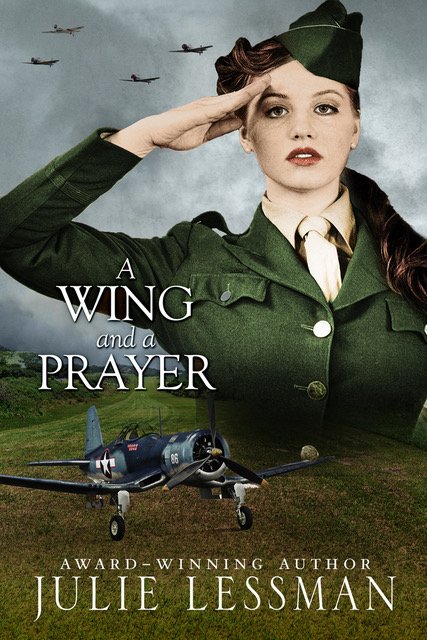 A street orphan abused and abandoned by an alcoholic father at age five, Gabriella (Gabe) O’Connor has never let a man stand in her way yet. So when a handsome flight officer thwarts her plans to become a WASP — Women Air Force Service Pilot — she’s determined to join the war effort anyway she can. Her chance comes when she “borrows” foreign correspondent credentials from the Boston Herald—where her father is the editor—to stow away on a medical ship to the front.

Lieutenant Alex Kincaid pegs Gabe O’Connor as trouble the moment she steps foot on Avenger Field as a WASP cadet. As the eldest brother of a boy whose jaw Gabe broke in grade school, Alex is familiar with her reputation as both a charismatic ringleader and a headstrong hooligan who’s challenged every male and nun from grade school to college. As her WASP flight instructor, Alex eventually expels Gabe when she pulls a dangerous stunt. But when he is an evacuation pilot in France eight months later, their lives intertwine once again, exposing them to a danger as perilous as the German tanks roaming the Reichswald Forest: a love that neither expects.

“…real love chooses the best course of action, not the easiest.”

If you loved Lessman’s Winds of Change series as much as I do, then you’ve probably always wondered if Gabe would get her story. Turns out, we just had to wait for her to grow up – a journey we get to be part of through the pages of the author’s latest romance, A Wing and a Prayer. Because, while Gabe might be physically grown up when this book begins, she definitely has a lot of needed maturity to embrace when it comes to her heart and her soul.

And in light of all that’s going on in our world right now, these words really hit home:

“…no matter how old or independent we may be, people are attached to every choice we make, so it’s critical we seek His wisdom in each and every one.”

As with most of Lessman’s heroines, Gabe is a spitfire and a half, at times a literal tangle of feet and arms and hands, kicking and clawing her way to what she feels is right. Or, rather, what feels right to her. There’s a big difference between the two, and Gabe’s got some hard lessons on that subject ahead of her. Many of them doled out by our swoony, rule-following hero, ace medivac pilot & doctor-to-be Alex Kincaid. And while I wanted to shake both of them more than once throughout their story (as I usually do with Lessman’s passionate and feisty characters haha!), it’s such a richly-drawn and heart-tugging journey that mainly I just wanted to hug them both really tight. (Ok, and maybe klunk their heads together a bit once I’m done hugging.)

The kisses and the romantic tension between Gabe and Alex are SWOONY with a capital S (and all the other letters too), but I almost loved their friendship even more. (Notice, I said ‘almost’. Those are some really good kissing scenes LOL) Like with every true friendship, they complement each other, yes, but also sharpen each other like iron on iron when it counts. Gabe is good for Alex, and Alex is good for Gabe. Both force the other to confront the areas in themselves they aren’t proud of – and to find forgiveness in the abundant grace and mercy of God. And … you know… the intense kisses between them when the tension has reached a breaking point … that didn’t hurt any to read either 😉

Bottom Line: A Wing and a Prayer is a well-researched, captivating glimpse into life during World War 2. From the medical flights to bring supplies to the front lines and the dangerous heart-in-your-throat moments encountered along the way, you’ll be turning the pages as quickly as you can to see how it all plays out. Gabe has a lot of maturing to do, and unfortunately getting there the hard way is never fun. But in taking us along for the ride, Lessman reminds us that no matter who has failed us on earth, God can be trusted because He loves us better than anyone else ever could. A fun but meaningful romance from the Kissing Queen herself, A Wing and a Prayer is a must-read for fans of Sundin, Breslin, and Gohlke!

(I voluntarily reviewed a copy of this book which I bought for my own collection. All views expressed are only my honest opinion.) 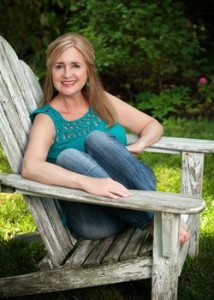 Julie Lessman is an award-winning author whose tagline of “Passion With a Purpose” underscores her intense passion for both God and romance. A lover of all things Irish, she enjoys writing close-knit Irish family sagas that evolve into 3-D love stories: the hero, the heroine, and the God that brings them together.

Author of The Daughters of Boston, Winds of Change, Heart of San Francisco, Isle of Hope, and Silver Lining Ranch series, Julie was American Christian Fiction Writers 2009 Debut Author of the Year and has garnered over 18 Romance Writers of America and other awards.
Voted #1 Romance Author in Family Fiction magazine’s 2012 and 2011 Readers Choice Awards, Julie’s novels also made Family Fiction magazine’s Best of 2015, Best of 2014, and “Essential Christian Romance Authors” 2017, as well as Booklist’s 2010 Top 10 Inspirational Fiction and Borders Best Fiction. Her independent novel A Light in the Window was an International Digital Awards winner, a 2013 Readers’ Crown Award winner, and a 2013 Book Buyers Best Award winner.

Julie has also written a self-help workbook for writers entitled Romance-ology 101: Writing Romantic Tension for the Sweet and Inspirational Markets. Contact Julie through her website and read excerpts from each of her books at http://www.julielessman.com. 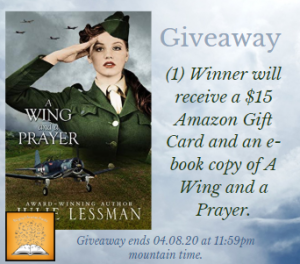 
This giveaway is hosted by SLB Tours, not RimSP
Follow along by clicking the banner below

What about you? What interests you most about A Wing and a Prayer?

16 responses to “Book Review (and a Giveaway!): A Wing and a Prayer by Julie Lessman”