Welcome to the Blog Tour & Giveaway for Lost Down Deep by Sara Davison, hosted by JustRead Publicity Tours!

She is the only one who can tell the police who attacked her in her home. If only she could remember…

Summer Velasquez is on the run from a man she has no recollection of after an attack she can’t recall. Every face in the crowd is a potential suspect, so how is Summer supposed to know who is a threat to her and who isn’t?

After fleeing her assailant and the parents who lied to her about what happened, she changes her name and seeks refuge in Elora, Ontario. The small town feels familiar, although she has no memory of ever having been here.

Even in what should be a safe place, she can’t shake the feeling that she is being watched.

When Ryan Taylor strolls into the Taste of Heaven Café where she works, Summer is immediately drawn to him. However, he may not be who he says he is either. As her suspicions grow, Summer prepares to run again.

But at least one person is determined to stop her. Permanently. And if she can’t remember who he is, this time he may succeed.

photo tour of the setting

by Sara Davison, author of Lost Down Deep

Lost Down Deep is set in the real-life small town of Elora, Ontario, Canada, one of my favourite little towns in the world. The picture of this building, The Elora Mill, in a map book is what compels Summer to flee to the small town after she is attacked and loses her memories of the last few years. 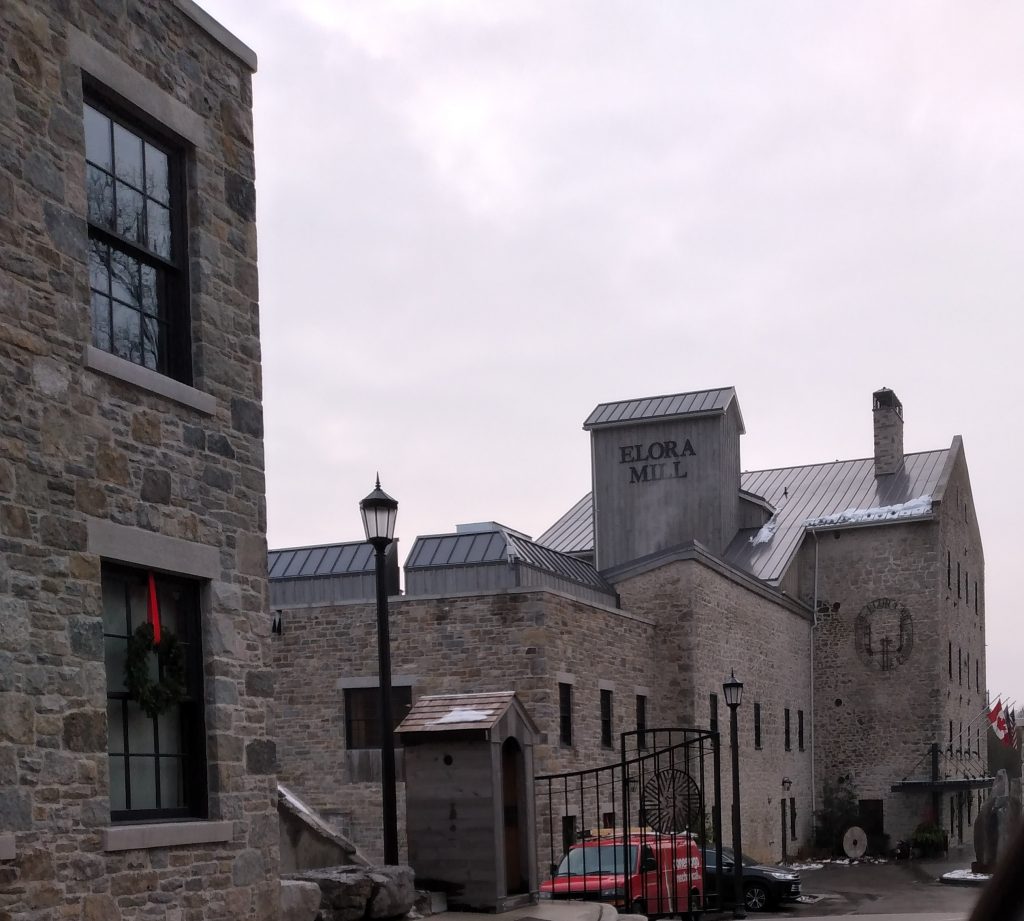 From the book: “Ahead of her and across the street loomed the beautiful Elora Mill. For several minutes Summer gazed at the old stone hotel and the smaller building beside it, an elegant spa. She glanced down at her fingers and winced. What she wouldn’t give for a manicure right about now. Or a pedicure. Or a massage. She rested her head against the back of the seat. Maybe one day. Judging from the look of the place, she’d need to make a bit of money first.”

In addition to Elora’s warm hospitality and quaint shops, a river runs through the town, a deep gorge on either side. The natural beauty is spectacular and the river plays a major role in the book. 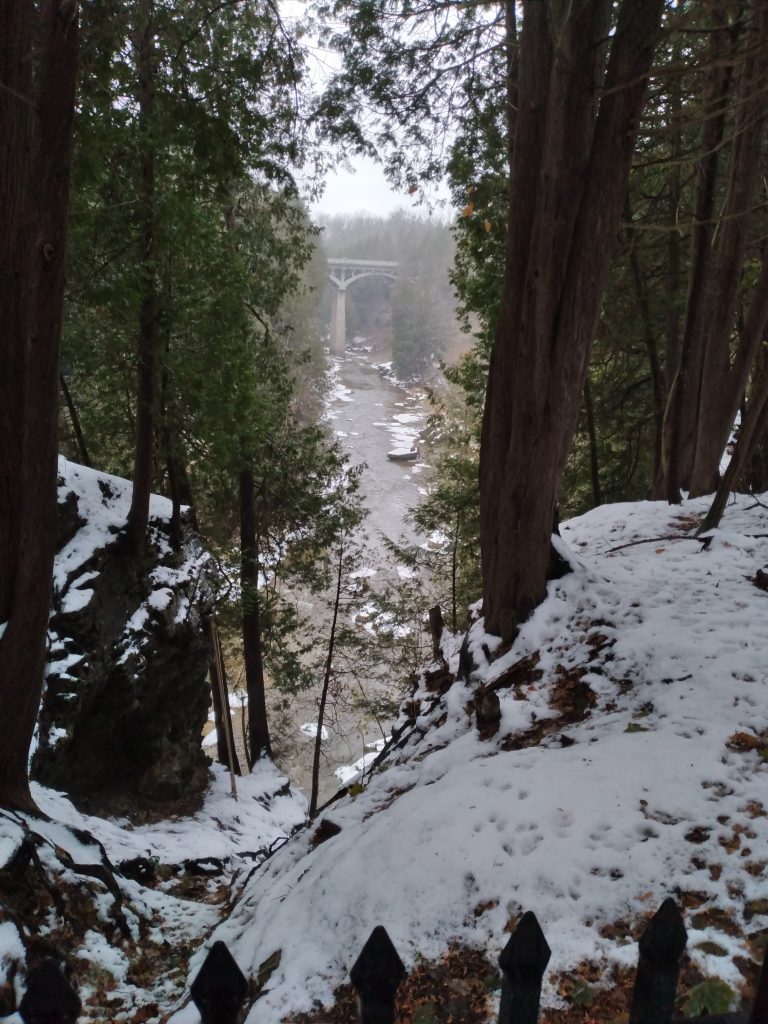 One evening, Summer and Ryan are hiking along the top of the gorge and Summer stops at the lookout area known as Lover’s Leap.

“Summer looked up. To the left, steps led down to a rounded area that overlooked the river. ‘Should we check out the view?’

‘There won’t be much to see in the dark.’ The words sounded tight, as though he had to work to get them out.

What is that about? ‘Might as well look while we’re here.’ She started down the stairs. After a few seconds, his footsteps echoed on the stone behind her. Summer reached the wall and pressed both palms to it so she could lean over the top. Far below, the river, a ribbon of sparkling white in the moonlight, wended its way between the shores and under the bridge.

‘Careful.’ Ryan grasped both her shoulders. A tremor passed through his fingers.

Summer straightened. He let her go when she turned around. “Not a fan of heights?”

“Heights don’t bother me. You tumbling down a ravine in the dark would.” 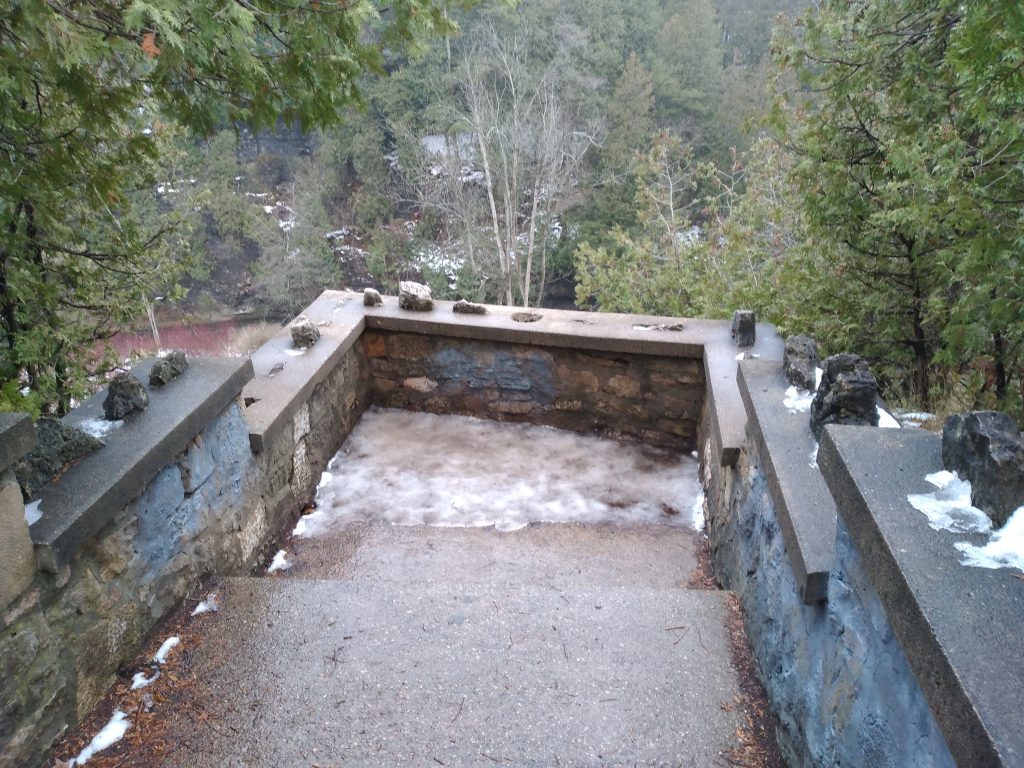 A little farther along the trail at the top of the gorge is a set of fifty-nine stone stairs that appear in the main character’s recurring nightmares.

“‘It’s only fifty-nine steps. You can do it.’ Her voice came to him, drifting through the gathering twilight, laughing, teasing. Jude stared down the rough stairway, carved into the side of the rock face. He knew how many steps there were. How many times had they counted them as they’d scrambled up and down them as kids? But that had been in the summer, in daylight. This evening the stones were covered in ice and a dusting of snow marred only by her footprints.

He’d had a long, hard day at work, and all he wanted to do was go home and crash in front of the TV. He called her name, hoping she would come, knowing she wouldn’t. It had never been possible for him to talk her out of doing something once she had an idea in her head, no matter how crazy it was.

He was going to have to go after her. He stomped down onto the first step and paused. Really don’t feel like doing this. It wasn’t so much the fifty-nine down he objected to but the fifty-nine back up.” 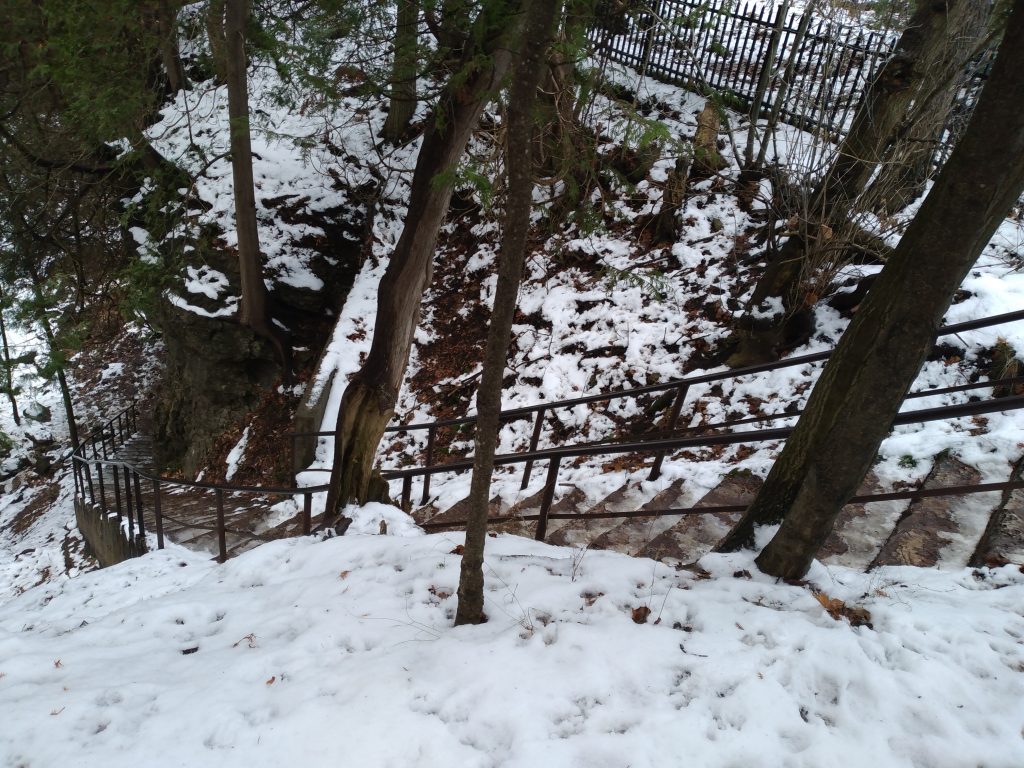 It’s so much fun writing a series set in a town I visit all the time and that I absolutely love. It makes writing the description easy as I can picture everything as I write it down. If any of you ever visit Ontario, I highly recommend taking a day trip to the picturesque town of Elora. If you get the sense you are being watched, however, don’t ignore the feeling. It could very well be true, as Summer found out the hard way in Lost Down Deep.

Sara Davison is the author of the romantic suspense series, The Seven Trilogy and The Night Guardians. She has been a finalist for eight national writing awards, including Best New Canadian Christian author, a Carol Award, and two Daphne du Maurier Awards for Excellence in Mystery/Suspense. She is a Word and Cascade Award winner. She currently resides in Ontario, Canada with her husband Michael and their three children, all of whom she (literally) looks up to.

(1) winner will receive a print copy of Lost Down Deep by Sara Davison and a $25 Amazon Gift Card!

Be sure to check out each stop on the tour for more chances to win. Full tour schedule shown below. Giveaway will begin at midnight April 20, 2020 and last through 11:59 PM EST on April 27, 2020. Winner will be notified within 2 weeks of close of the giveaway and given 48 hours to respond or risk forfeiture of prize. US/CAN mailing addresses only. Void where prohibited by law or logistics.

What about you? What interests you most about Lost Down Deep by Sara Davison and/or the photo tour of the setting?

22 responses to “Guest Post (and a Giveaway!): Sara Davison & Lost Down Deep”