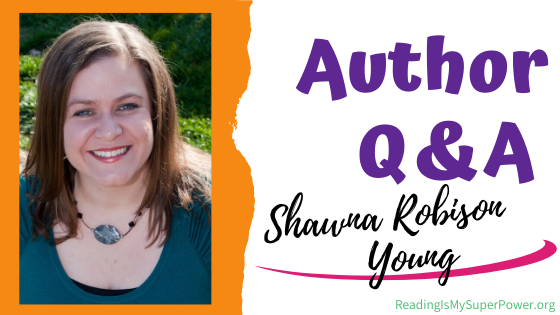 I’m so excited to welcome my friend Shawna Robison Young to the blog today to chat about her debut novel, The Unsuspecting Heather Meyers! (And isn’t that such a great title?) 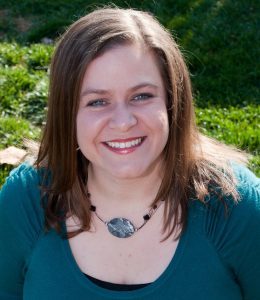 Shawna is a contemporary fiction author who enjoys writing a little bit of the unexpected. Why be normal? In a world of conformity, a touch of something out of the ordinary can make a work of art astonishing.

Shawna loves all things chocolate especially a warm cup of hot chocolate and sea salt caramel truffles. She is the mother of four, a preschool owner and teacher, a former children’s minister, and the wife of a navy veteran. Whether it’s singing the ABCs, sharing what she’s learned with new writers, or passing along Bible truths to her children ministry classes, she’s a teacher at heart. 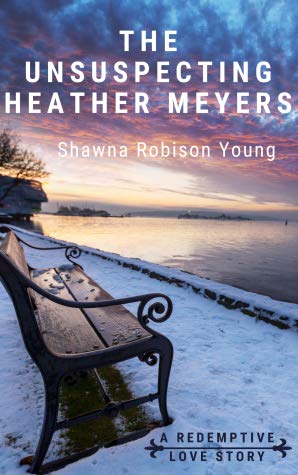 What if you’ve returned home to start your life over, only to discover you’re there to finish it?

Ready for a fresh start, Heather Meyers flees from not-so-sunny California to her hometown in Indiana. But fate has other plans—stage IV cancer and three months to live. Determined that one more kick from life won’t destroy her faith, Heather fights against its schemes. Before she can take her final rest, redemption must be found for someone she loves.

Physical therapist Dr. Jack Jones (JJ) would do anything to change the past, to not have let his high school sweetheart get away. Now that Heather’s back, he’d do anything to keep her from leaving. With her time running out, he may never get his chance to set things right.

By a twist of fate and with an extra dab of this and a little bit of that, nurse Anna Ingram sets out to prove that JJ is more than his past mistakes and Heather can find hope and love in the midst of the biggest battle of her life.

Hi Shawna! Welcome to the blog!

Shawna: Oranges. I love apples too, but I can’t pass up on all the sweet juiciness of an orange. My favorite smell is cinnamon apples though. Year round.


Carrie: I love shelter dogs! And wow, Talya is quite the mix haha! love it

Shawna: Over. It just seems natural.


Carrie: I never can find the starting point when it’s over… I’m going to blame math somehow.

Shawna: Print. Ebooks are great to get the book immediately, but there’s something about holding the actual book in my hands and flipping through the pages.

Shawna: I call myself “The Kid Whisperer.” LOL. I’m a preschool teacher and also serve in children’s ministry. God blessed me with the gift of working with children.

Carrie: that definitely IS a superpower 🙂


Shawna: Nancy Drew. I loved trying to solve the mysteries with her and occasionally the Hardy Boys too.


Carrie: yes! me too! Nancy Drew is my girl!

Shawna: That I keep everything and should organize myself a little better. Ha. Ha. I might say I’d win that purse game often played at parties and showers, but my purse is full of a lot of junk rather than practical items I might need. Band-aids for one of my four children? Maybe, probably not. An old wrapper from a candy bar I had after a big grocery shopping trip for my family of six? Most definitely. 🙂


Carrie: haha! i can relate to this


Q: If Hollywood wanted to produce The Unsuspecting Heather Meyers as a movie, who would you want to be cast as the lead roles?

Carrie: You had me at Scott Eastwood 😉

Shawna: With The Unsuspecting Heather Meyers, I thought I knew where the story was going, but it became so much bigger than I ever imagined. Heather (heroine) let me know that the man I was writing for Keith wasn’t him at all. That was the man he wanted people to see. Behind the doors he was someone totally different. Also several of the twists came from my love of something different than the same old same old. Like many readers have told me, I didn’t see the twists and turns coming either.


Carrie: oh i love that! I find the process so fascinating!


Q: What do you most want readers to take away from {YOUR BOOK}?

Shawna: We are more than our past mistakes and that redemption can be found.

Shawna: Currently, I’m revising the book of my heart. It seems like an endless process (ten years in the making). I pray it finds its home soon. Waiting Among Ashes is the story of a woman, Kelley Stone whose Navy husband is missing in action. It follows her journey of denial to acceptance to the answer of what happened to Chuck Stone. The reader discovers the story of three best friends whose lives change forever by one plane crash.

Carrie: Praying for great things there! 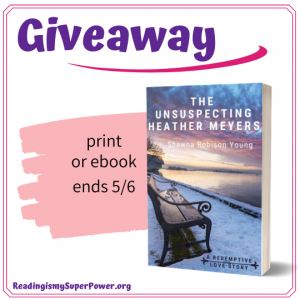 Shawna Robison Young is offering a copy of The Unsuspecting Heather Meyers – winner’s choice of print or ebook – to one of my readers! (US only. Void where prohibited by law or logistics.) This giveaway is subject to Reading Is My SuperPower’s giveaway policies which can be found here. Enter via the Rafflecopter form below.


What about you? What interests you most about The Unsuspecting Heather Meyers and/or my Q&A with Shawna Robison Young?