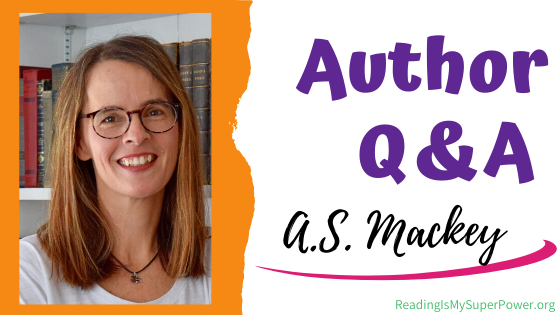 I’m excited today to welcome A.S. Mackey to the blog to chat about her newly released middle grade novel, The Edge of Everywhen! 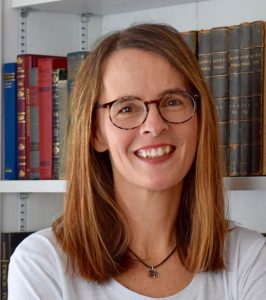 A.S. Mackey’s first foray into writing took place when she was an elementary school kid in Smyrna, Georgia. Her debut “book” was a Steno pad full of poems, given to her parents as a Christmas gift when she was eight. As a preteen, she filled books with lofty, angst-filled poetry, and she wrote her first sci-fi novel at age fifteen. (It was horrid.) Her nickname in high school was Webster, but she did not, in fact, read the dictionary for fun.

Her love for creative writing was solidified with a bachelor’s degree in English Literature from the University of Georgia in 1991. During her senior year at UGA, she was a reporter and copy editor for the Oglethorpe Echo newspaper in Lexington, GA. From 1992-1993 she was a regular humor column contributor in the quarterly independent musicians’ magazine Visions of Gray, writing under the pen name of Uncle Earl. Allison is also a musician, and she wrote and recorded an original eleven-song CD in 2003 titled You’ve Waited Long Enough.

Mrs. Mackey has written multiple children’s stories on a contract basis with Tiny Readers Publishing in Houston in 2014. She has also created web content for scores of websites around the world through Upwork. She loves to cook, and a recipe she helped develop with her identical twin sister is included in the 2017 edition of The Old Farmer’s Almanac Readers’ Best Recipes and the Stories Behind Them.

She enjoys speaking to students of all ages, and has taught creative writing workshops in Alabama, Georgia, and Tennessee.

A.S. Mackey is honored to be represented by agent Elizabeth Bennett at the Transatlantic Literary Agency. She is the secretary of the Shoals Writers Guild in Florence, Alabama where she currently lives. She and her husband Chad are church planters and worship leaders, and she is the mother of three adult children and a son-in-law. 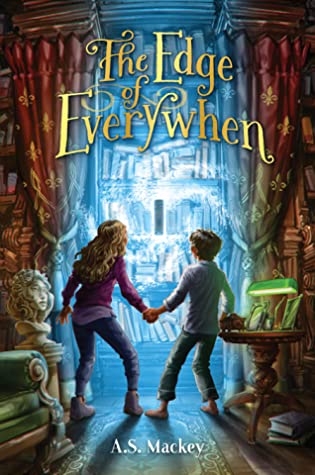 A unique middle-grade novel, The Edge of Everywhen tells the story of Piper, a 13-year-old self-proclaimed book nerd whose world has been upended after the death of her mother. She and her autistic little brother (and best friend) Phoenix cling to one another as they are forced to move a thousand miles away from everything familiar and live with their rich, estranged aunt.

Piper reaches to the books on her shelf for comfort, but it is one unique book, Novus Fabula, who offers true guidance as the omniscient narrator in the story. It watches them arrive at their aunt’s home, with tired hearts and stones in their stomachs, and now its whispered voice must point the children to depend upon the sovereignty of God during the most dire times as they await word of their missing father.

“What’s that you say? Books cannot speak? On the contrary, dear Reader. Quite the contrary. Books are one of the few things on this earth that truly speak, from the moment the first word is penned until the book’s last Reader has drawn their final breath.
Let me show you.”—Novus Fabula

Full of mystery and intrigue, The Edge of Everywhen story bridges the chasm between faith-based and fantasy kid-lit genres. It is a book-lover’s book, carrying the reader right into the adventure as Piper and Phoenix embark upon a life-changing journey, in search of their father and of a faith to call their own.

A.S.: Music, hands down. I’m a worship leader and singer/songwriter as well as a children’s book author. I’m actually in a local band with my husband and some friends! We do live shows in the community, and I sing and play piano, guitar and Irish penny whistle. Besides leading worship, I love to sing/play jazz on the piano. I come from a large family of musicians, and it’s not uncommon for all of us to be heard walking around the house singing at the tops of our lungs!

A.S.: There is a decades-old family story about this controversy that makes me giggle. I have a huge extended family on my mom’s side, and out of my numerous aunts and uncles, only one of them does her toilet paper under – which, as every right-minded person knows, is the wrong way. So every time any of us goes to her house, we sneak around and switch all the TP to over – as it should be. It’s been a family joke for years!

A.S.: Mountains, definitely. I grew up camping in the woods with my family every summer. My mom would rise before dawn and go fishing, and my dad would take whatever she caught and fry it up for breakfast. So good! Plus I’m far less likely to get sunburned in the mountains; I have very fair skin, and my skin isn’t a happy camper at the beach. Mountains, all the way!


Carrie: I’m with you on the mountains but not the camping 😀 lol

A.S.: Print, print, print! I love and appreciate the accessibility of e-books, and I definitely use them if I can’t find the print version of a book I really want to read. But there is something so captivating about holding a printed book in your hands, and feeling the weight of it in your lap, and inhaling the aroma of the pages. There is a visceral reaction as you turn the pages with your fingers that an e-book can’t mimic, and for me, the physical presence is part of the joy of reading.

A.S.: I’d love to be able to teleport instantly anywhere in the world. I want to see as much of this gorgeous planet as possible, and I would use that superpower just so I could eat food from all over the world! I read a book once called The Fruit Hunters by Adam Leith Gollner, and it listed hundreds of delicious sounding fruits that we have no access to in America, and the sheer injustice of this fact left an impression on me. Forget apples and oranges and blueberries (yawn). I want to be able to teleport to the tropics and sink my teeth into some bilimbis, wampees, rambutan, bignays, gourkas, langsats, loquats… all of it!


Carrie: haha! Lots of people have said they want to teleport – but you’re the first one to want to do so to eat fruit 😀 Love it!


A.S.: The Inquisitor’s Tale Or, The Three Magical Children and Their Holy Dog. It’s a YA/MG novel by Adam Gidwitz and published by in 2016, and it won multiple awards. It’s such a charming and beautifully written story, with lots of twists and turns, and it’s told in a similar style to Chaucer’s Canterbury Tales. I also just finished reading Walking on Water: Reflections on Faith and Art by Madeleine L’Engle, and I was blown away by her insight. If you are a Christian artist in any medium – poetry, prose, dance, sculpting, painting, whatever – read this book. It’s so inspiring!


Carrie: I love Madeleine L’Engle – so much respect for her!


A.S.: I wrote a murder mystery about someone who does away with a vile, wicked bad guy by way of cooking up delicious food laced with various poisonous plants. For weeks I Googled topics such as, “how to perform an autopsy,” and “how long does it take to die if you ingest water hemlock?” and “symptoms of deadly nightshade poisoning.” LOL it’s fascinating stuff!


Q: Were there any songs that inspired you as you wrote The Edge of Everywhen?


A.S.:There’s a story behind my enthusiastic YES! The song is Touch the Sky by Hillsong United. I had already finished the first draft of The Edge of Everywhen, and I was going through a fairly extensive rewrite. One morning in the early summer of 2016 I was worshiping with my play list, and I began to “see” the novel play out in my head as though I was watching a cinematic movie trailer. That song came on, and the scene playing in my head shifted and became something different than what I’d written! So I rewrote that particular scene to match what I’d seen in my head, and it made a much more compelling scene.


Q: If Hollywood wanted to produce The Edge of Everywhen as a movie, who would you want to be cast as the lead roles?


A.S.: I literally have a folder on my laptop with images of some of these actors! If we could start shooting today, actress McKenna Grace (from Troop Zero and Gifted) is the perfect age to play Piper, and Archie Yates (from JoJo Rabbit) would be great as Phoenix. Gordon is played by Mark Ruffalo, Aunt Beryl is played by Helen Mirren, and Original Greene is Morgan Freeman. (Hollywood needs to hurry up and produce this movie, because Morgan Freeman isn’t getting any younger!)

Carrie: hahaha this is true 😉  And what a phenomenal cast that would be!!


Q: What do you most want readers to take away from The Edge of Everywhen?

A.S.: My hope is that readers will take away the truth that God is present even during the hardest circumstances, and that even when we have doubts and questions, he still speaks to us, and often in ways we don’t expect.

A.S.: I have several MG/YA novels in progress at the moment. My hope is that The Edge of Everywhen will do exceptionally well, and that the publisher will offer me a contract for books 2 and 3 of the trilogy. The first draft of book 2 is complete (in the editing phase), and book 3 is in the planning stages. As part of the marketing strategy for my debut novel, I will be making lots of school author visits and lots of summer reading program appearances all around the south. If you would like me to come to your school or library or home-school co-op group, let me know – I would LOVE to come! And if it’s too far for me to drive, I’m always available via Skype or Zoom. This summer I’ll be teaching a workshop at the Southern Christian Writers Conference in Tuscaloosa.

Carrie: Zoom & Skype have come in handy during this quarantine, haven’t they?

A.S. Mackey is offering a print copy of The Edge of Everywhen to one of my readers! (US only. Void where prohibited by law or logistics.) This giveaway is subject to Reading Is My SuperPower’s giveaway policies which can be found here. Enter via the Rafflecopter form below.


What about you? What interests you most about The Edge of Everywhen and/or my Q&A with A.S. Mackey?

14 responses to “Author Interview (and a Giveaway!): A.S. Mackey & The Edge of Everywhen”