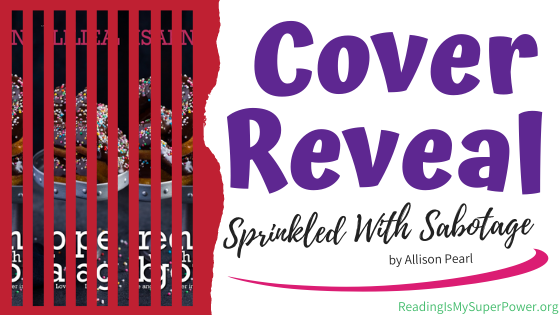 Today I’m pleased to bring you the cover reveal for Sprinkled With Sabotage, a new suspense novel by Allison Pearl!

She trusts him with her life. But what about her heart?

Lizzy Bennet loves life as a lawyer in the city. And not just because of the miles it puts between her and her ex. However, when she’s attacked on the street just hours after learning her identity was stolen, she tries to call home for help and ends up with the last person she expects: the very same high school boyfriend who broke her heart. He says he’s there to help, but she’s not so sure, and now, all the endless questions and regrets are clouding her judgment and preventing her from seeing the dangerous saboteur closing in.

Small-town auto mechanic, Koby Knightly, is looking forward to seeing a car show in the city. But when an unexpected call from his old girlfriend disconnects suddenly, he rushes to her apartment only to find her limping and bleeding. Throwing his plans out the window, Koby makes it his mission to protect her and discover the identity of the person trying to frame her. Will he also be able to figure out what went wrong between them back in high school or will a killer get to her first?

Other Books in This Series
amazon affiliate link used 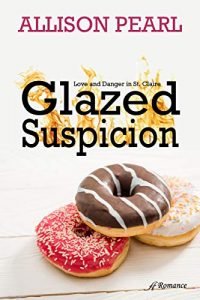 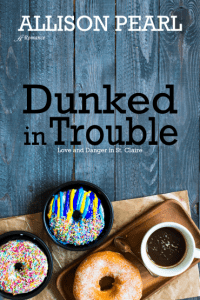 Excerpt from Chapter 1 of Sprinkled With Sabotage


Lizzy popped up the collar of her long red trench coat as a shield against the wind and pulled the knotted belt a little tighter. Maybe she should call her brother instead. Why had her first thought been Koby anyway? The days of being able to turn to her former sweetheart whenever she got scared were long gone. After all, walking down a dark street in Pittsburgh wasn’t the same as an old horror flick playing at the one-screen theater in her hometown of St. Claire. Not to mention she was no longer a silly girl who needed to grab on to some boy’s arm.

Her brother was a sheriff’s deputy and former soldier. If anyone needed to tell her if she was being paranoid and crazy, it should be Josh. Not some country auto mechanic that used to drive her around in high school.

Pushing open the handbag slung over her shoulder, she slid her hand inside for her phone. She pulled it out and pressed down her thumb, ready to tell the device to call Josh Bennet but…

Was that a good idea?

Now was not a good time. Her brother would certainly jump in his car and drive through the night for her, but the timing would be terrible. He was getting married next weekend. What kind of sister would she be if, right before one of the biggest days of his life, she pulled him into whatever mayhem was transpiring in her world? But she knew her brother. He’d be ticked if she didn’t at least call someone.

There it was again. That rustling sound. Pausing mid-step, she tried to dampen her throbbing heart as she turned on her heel to scan the street behind her. Nothing. No people. No moving cars. No crumpled bits of trash colliding with the hard snow pushed against the curbs. Sucking in a breath, she continued toward home.

This was ridiculous. She’d feel better if she was talking to someone who knew where she was and what was going on. But who could she call for advice other than Josh?

She froze, staring at the lit-up screen. Her breath caught and a wheel turned at the top of the screen. It was already dialing.

“Oh no.” Her fingers fumbled for the red ‘end call’ icon but a lock of hair blew into her face as something whooshed past her back. Lizzy whirled around but saw only a darkened sidewalk. Eyes darting, she looked for any sign of movement, but all was still frozen in place by the hardened remnants of yesterday’s snow. She exhaled, backing away. It must be the wind. Stop being crazy.

She jumped and her eyes went back to her phone. His name was scrawled across the screen.

“Hello?” His voice sounded weak through the speaker meant to be pressed to an ear.

Should she hang up?

“Lizzy, I know it’s you. Even cell phones from down here in the sticks have caller ID, you know.”

She rolled her eyes as she trudged forward. Just great.

“Lizzy…” He said it in a sing-song tone.

What could she say other than the truth?

She raised the phone to her ear. “I called you by mist—”

Again, she felt the ghostlike presence behind her. Gasping, she about-faced, dropping her hands to her sides. It was starting to flurry and the flakes danced in the light of the moon. All else was quiet.

Lizzy drug the fingers of her free hand down her face as she groaned. Pull yourself together, girl, and get moving.

She pressed the speaker to her ear. “I’m fine. I just thought—”

A vice clamped around her wrist underneath the cradled phone and shook. It flew from her grasp. She reached for it with her other hand, but it was halted when someone grabbed her around that elbow. 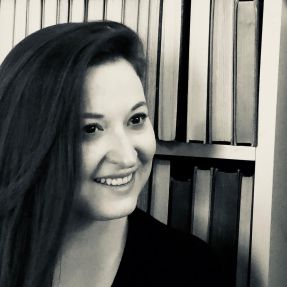 Allison Pearl is a small-town girl who’s lived just about everywhere. She loves books, tea, chocolate, and watching old movies with her husband and black lab, Sal. To keep in touch and get updates on new releases follow her Facebook page ‘Books by Pearl’ or follow her on Twitter at @AllisonPearl5 and Instagram at @allisonnicolepearl 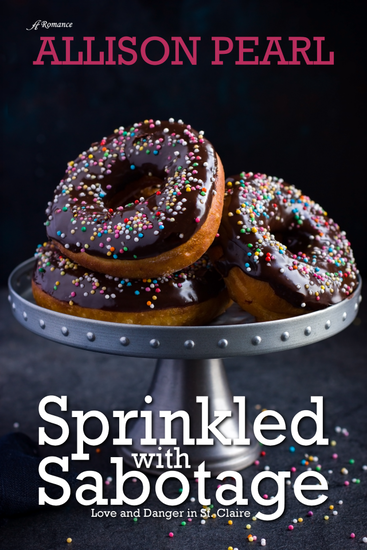 One response to “Cover Reveal: Sprinkled With Sabotage by Allison Pearl”