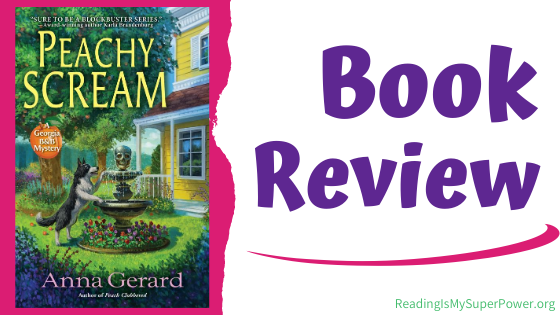 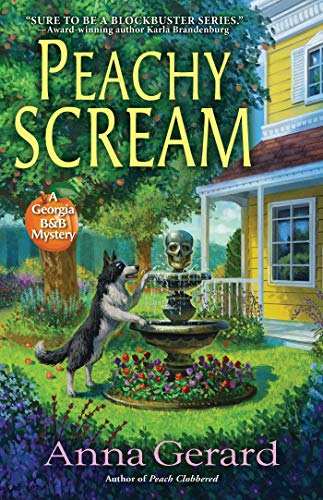 To die or not to die? Georgia B&B proprietor Nina Fleet struts and frets to bring the curtain down on a Shakespearean actor’s killer.

It’s nothing short of inevitable that Cymbeline, GA, hosts an annual Shakespeare festival. But stage-struck Nina Fleet is about to learn that putting on an amateur theatrical production can be murder. Nina’s anticipating showbiz glamour and glitz when a community Shakespearean troupe arrives for a two-week stay at her B&B. But the lights dim when she learns the company’s director is her nemesis, struggling actor Harry Westcott–who still claims to be the rightful heir to Nina’s elegant Queen Anne home.

Meanwhile, the troupe members are not content to leave the drama upon the stage. Accusations of infidelity and financial malfeasance make a shambles of rehearsals. And then, two days into the troupe’s stay, the lead actor is found dead in Nina’s formal Shakespeare garden. Murder most foul!

Worse, it seems every member of the amateur troupe has a motive–including wealthy construction company owner Marvin Jeffers, who seems to have a personal interest in Nina. But when the sheriff arrests the supposed boyfriend of the slain actor’s widow, Nina suspects that the wrong troupe member is in jail. She and her trusty Australian Shepherd, Matilda, join forces (none too happily) with Harry to sleuth out the murder plot.

Will they find the real killer before someone else shuffles off this mortal coil? Find out in Anna Gerard’s delightful second Georgia B&B mystery. 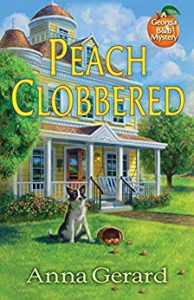 “Finding a dead body in your formal garden has got to rate in the top ten Bad Things that can happen to a person. To be fair, war and plague and famine do have a lock on the first three spots.”

Once again, Anna Gerard has me caught up in a book by the first few lines. I really enjoyed Peach Clobbered, the first in this Georgia B&B Mystery series, so I was very much looking forward to Peachy Scream – I’m happy to report that I really enjoyed this new installment as well.

Nina’s first person narrative voice is delightfully conversational and a little bit snarky (which I love), and the characters she encounters at her B&B and the small town of Cymbeline are as quirky and suspicious as you might expect for a cozy mystery. Instead of nuns, in Peachy Scream, Nina’s inn is descended upon by a troupe of Shakespearean actors with none other than Harry Westcott (Nina’s part nemesis, part potential love interest) at the helm. These Hamlet players bring a new level of layers (and dry humor) to the mix, making you simultaneously entertained by their drama & feeling sorry for Nina for having to put up with them. (And can I just say that I’m typing this from Georgia. In the summer. In the hot hot hot summer. And I can’t imagine being all dressed up in Shakespearean garb to rehearse and perform a play outside. Nope. Nope. Nope. lol)

I also really love the eccentricities of Cymbeline – the author has done a great job of capturing a small southern town with its offbeat way of doing things. Particularly the ‘one stop shop’ appeal (?) of the coroner who also happens to be a pastor and the funeral home director! (LOL) The police chief is refreshingly portrayed as a competent law enforcement officer and is a great supporting character – and, for her part, Nina is more responsible (sometimes) in her sleuthing than a lot of cozy mystery heroines. And, of course, Mattie the sweet & faithful dog – gotta love her!

Bottom Line: Engaging to read & smartly written, Peachy Scream is a fabulous followup to its predecessor in the Georgia B&B mystery series by Anna Gerard. The plot, with its infusion of entertaining & intriguing characters, will more than hold your attention from beginning to end, and you’ll turn the last page already eager for the next trip to Cymbeline. While my initial guess of the culprit was ultimately right, I was never 100% sure until just before the creative reveal – and I certainly didn’t guess the WHY behind the WHO. Fun series to add to your TBR list! 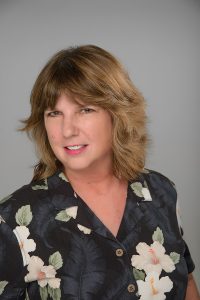 Diane is a member of Mystery Writers of America and served as the 2018 and 2019 Chapter President of the MWA Florida chapter, receiving the “Flamingo” Chapter Service award in 2019. She’s also a member of Sister in Crime. In addition to her mystery writing affiliations, she’s a member of the Cat Writers’ Association and belongs to the Palm Beach County Beekeepers Association. Diane is a native Texan with a degree in Journalism from the University of Oklahoma, but has been living in the West Palm Beach FL area since 2006. She shares her “almost in the Everglades” home with her husband, dogs, cats, and a few beehives. Learn more about her books at www.dianestuckart.com

What about you? What makes you want to read Peachy Scream by Anna Girard?

9 responses to “Book Review (and a Giveaway!): Peachy Scream by Anna Gerard”