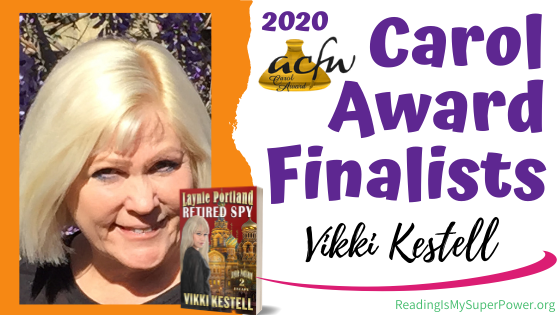 Happy Friday again! As you by now already know, through September 19th (culminating with a list of winners), I have the privilege of sharing mini interviews with nearly all of the 2020 ACFW Carol Award Finalists! Today I’m continuing with Vikki Kestell and her Carol Award finalist book Laynie Portland, Retired Spy! You can check out a list of all the finalists HERE. 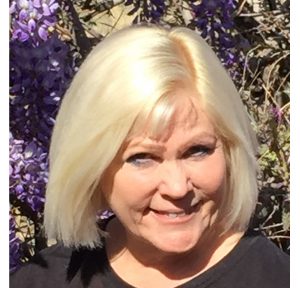 Vikki Kestell’s passion for people and their stories is evident in her readers’ affection for her characters and unusual plotlines. Two often-repeated sentiments are, “I feel like I know these people,” and, “I’m right there, in the book, experiencing what the characters experience.”

Vikki holds a Ph.D. in Organizational Learning and Instructional Technologies. She left a career of twenty-plus years in government, academia, and corporate life to pursue writing full time. “Writing is the best job ever,” she admits, “and the most demanding.”

Also an accomplished speaker and teacher, Vikki and her husband, Conrad Smith, make their home in Albuquerque, New Mexico. Visit her at www.vikkikestell.com 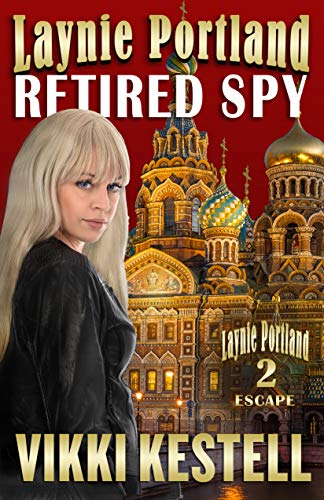 “Retirement” means something altogether different to a spy. It means someone in authority over you has decided that “coming in from the cold” is out of the question. It means you’d better run.

Laynie Portland has masqueraded as Swedish citizen Linnéa Olander for more than two decades, the last seven years as companion to Vassili Aleksandrovich Petroff, senior technology advisor to the Secretary of the Russian Federation’s Security Council.

Life as Petroff’s mistress is lonely and difficult, even brutal, for Petroff has a pathological need to master what is “his.” But the woman Petroff knows as “Linnéa” is not the compliant, deferential woman he believes her to be. She is Laynie Portland—spy extraordinaire—and Laynie has stolen a wealth of secrets from Petroff and fed the treasure to her Marstead agency handlers.

As Petroff’s abuse intensifies, Laynie fears for her life, and she petitions her agency to pull her out. Instead, her agency declares that she is too well-placed to decommission. Laynie is dismayed to learn that her Marstead chain of command would rather risk her death under Petroff’s hand than lose the valuable intel she provides.

Out of options and faced with no viable alternative, Laynie runs.

Enraged by her betrayal, Petroff vows to capture and punish her, a certain death sentence. And when Laynie disobeys orders, Marstead issues her a “retirement package”—a short walk off the deck of a ferry into the icy black rollers of the Baltic Sea.

Pursued by Russian assassins and hunted by her own agency, Laynie scrambles, fights, and claws her way toward freedom—although she knows that it is only a matter of time before her pursuers overtake her. Desperate and despairing, Laynie is stunned to sense a higher presence at work, acting on her behalf. Could it be the God in whom her sister, Kari, trusts?

Hi Vikki! Welcome to the blog!


Vikki: Carrie, I’ve been reading Christian fiction since Janette Oke published her Love Comes Softly series. I was thrilled with how she was able to share her faith through an engaging and stirring story. In fact, reading that series inspired me to write my first book, A Rose Blooms Twice, in 1988. The manuscript for Rose lay dormant in my file cabinet until I published it in 2012—twenty-four years later. But since then? That single book has grown to an eight-book series, A Prairie Heritage, and two spin-off series, including my newest series, Laynie Portland.

I think the long wait between writing and publishing my first book is a great example of how God never wastes anything—and his perfect timing is everything. I can also announce here that, God willing, I will publish the final installment of my Prairie Heritage series, Rose of RiverBend, in June of 2021.

Carrie: ‘God never wastes anything – and his perfect timing is everything’ – so thankful for that! (And congratulations!)


Vikki: You know, I can’t say that I have favorite authors or even favorite genres. I read voraciously from many genres and from any author who fires my imagination. As a result, I have authored four series in three quite different Christian fiction genres, something of an oddity in the writing world.

Carrie: oh gosh, my TBR list would be so much more manageable if I didn’t have untold dozens (or more) of favorite authors. But I wouldn’t trade them for anything! Of course I read beyond my faves list, too; otherwise I’d never find any new faves 🙂

Vikki: It’s true that I’ve developed certain writing habits over the years that work for me. For example, when I’m actively drafting a new book, I close myself into my office first thing in the morning, have my devotions, then open my writing spreadsheet and my work-in-progress, and write toward a daily goal of 2,000 to 2,500 words or a weekly goal of 10,000 to 12,000 words. I track my progress in the spreadsheet and am able to produce a full-length draft in twelve weeks. Following this process, I usually publish two books a year.

Counting words might sound like a dry way to write, but my prayer before I begin is always, “Lord, you are the Creator of the Universe. I’m asking you to pour your creativity into me. I’m asking that you fill me to overflowing with the power of your Holy Spirit so that the words I type carry your power out into the world. Do a work through this book, O God, and have your will and your way through me.”

I am continually amazed by the way the Lord answers this prayer! His creativity knows no bounds. 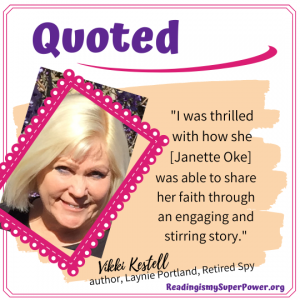 
Vikki: I would have to say that Laynie Portland stretched me pretty hard. I had to put myself in the shoes of a woman flawed from early childhood, a woman who believed she was worthless, fit only for the dirty jobs no one else would take. She assumed that the work she did as a cold-war spy would somehow give her life purpose and value. Instead, that falsehood became the rationalization for her many sins. And isn’t self-deception the means by which sin worms its way in our lives?

Planting myself in Laynie’s head and heart was painful—until God began to woo her. Then, as the Lord moved in Laynie’s circumstances, I experienced days when I could not type fast enough! Laynie’s redemption story is nothing short of glorious.

Carrie: redemption stories are so moving to read!


Q: What is one of your favorite quotes from Laynie Portland, Retired Spy & why do you love it?

Vikki: Rather than a quote from the book, I love the story’s tag line, because it provides insight to the book’s title, Laynie Portland, Retired Spy:

“Retirement” means something
altogether different to a spy.
It means someone in authority over you
has decided that “coming in from the cold”
is out of the question.

You see, after two decades of service to her country, Laynie is tired, jaded, and brittle. She wants out from under the abuse and control of the Russian politician and intelligence officer she’s lived with (and stolen vital secrets from) for seven years. She needs to get out before she shatters under the unrelenting pressure.

However, when she asks her handler to pull her from the field, the answer is no. She is told that she is too highly placed and the intelligence she provides is too valuable. In fact, withdrawing her from her present situation would arouse the Russians’ suspicions.

Out of options and faced with no viable alternative, Laynie runs. But when she disobeys orders, her superiors determine that they cannot risk her being caught and interrogated by the Russians. Instead, they issue an agency-wide “retirement package”—a short walk off the deck of a ferry into the icy black rollers of the Baltic Sea. And when the retirement order comes down, Laynie finds herself being hunted by both the Russian FSB and her own people.

Alone and desperate, Laynie is stunned to sense a higher presence at work, acting on her behalf—the hand of God keeping her safe.

Carrie, thank you again for having me today. I have enjoyed it. If your readers are interested in exploring the Laynie Portland series, I can offer them the first book, Laynie Portland, Spy Rising, for free in their preferred eBook format.


What about you? What makes you want to read the mystery/suspense/thriller Carol Award finalist Laynie Portland, Retired Spy by Vikki Kestell & what did you enjoy about Vikki’s answers?