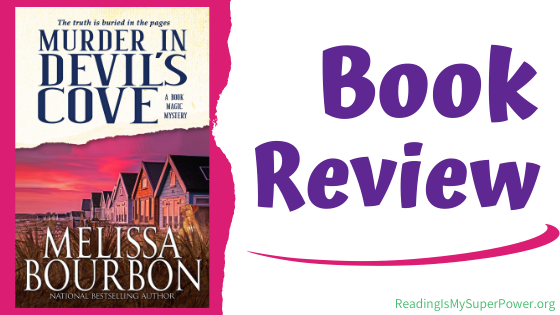 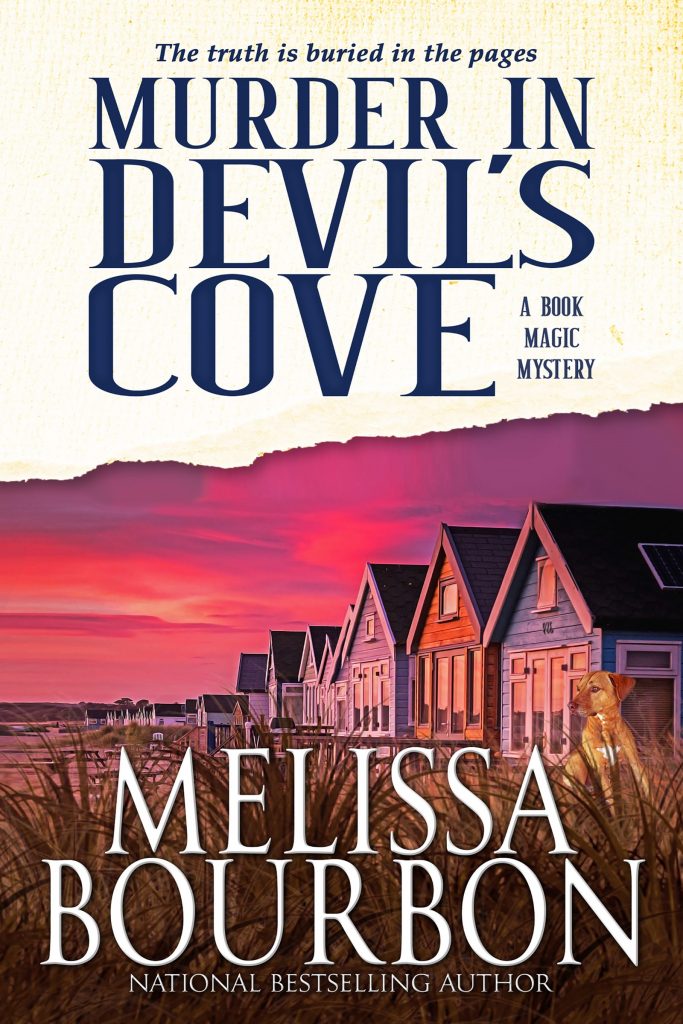 In the Book Magic Mystery Series, best-selling authors Melissa Bourbon and Wendy Lyn Watson bring you the story of cousins Pippin Lane Hawthorne and Cora Lane. The cousins live on opposite coasts (Pippin in Devil’s Cove, North Carolina, and Cora in Laurel Point, Oregon), but they share the family gift of bibliomancy: the ability to foresee the future and unravel the past with the help of the books we love. Join Pippin and Cora as they use their otherworldly power to solve mysteries in their respective worlds.

Every book tells two stories—one written on the pages with pen and ink, and one woven into the paper, a story of the soul. The Lane women have the gift of bibliomancy. They can read both.

But Cassie Lane doesn’t see this as a gift. For her, it is a curse because the book magic comes with a price–the Lane women die young and the men are lost to the sea. As soon as she’s able, she leaves Laurel Point, Oregon, running from her past and her fate, ending up in the Outer Banks of North Carolina. There she meets Leo Hawthorne and lives a perfect life with him in an old Sea Captain’s house.

Perfect, that is, until an old book foretells the future, and the curse that has plagued the Lane women comes true for Cassie.

Twenty years later, Cassie and Leo’s children, twins Pippin and Grey, are back in Devil’s Cove. Long forgotten secrets surface and an old crime comes to light. Now Pippin must learn how to be a bibliomancer if she is to discover the truth about her father and continue his effort to stop the curse.

I am so intrigued by this series! By the bibliomancy angle, by the way this book was written by one author with a focus on the East Coast cousin & the next book will be written by the other author and focus on the West Coast cousin & so forth & so on, by the ode to books that graces each chapter beginning and is lovingly woven through the whole story. By Pippin herself and her family legacy. By Jamie McAdams and possible connections maybe hinted at but that still aren’t clear between him and his grandfather and Pippin’s family gift. (Or maybe that’s my readerly mind working overtime – either way, I am intrigued.) By the subtle stirrings of romance that don’t overpower the story but appeal to the swoonlover in me nonetheless. By the old house with its secrets. And by what’s yet to come.

Murder at Devil’s Cove is a fascinating read in every way, and the author does a brilliant job of setting up the plot, the mysteries, and the discoveries. The friendships between Daisy, Ruby and Pippin – both old and new – are fun & heartwarming, and they add a touch or two of humor to lighten the tone when needed. Jamie, his grandfather, his bookstore, and his daughters were also a highlight for me, and I’m super curious to see how their relationship with Pippin & her family plays out in future books. (for instance, why does Pippin feel so oddly ‘at home’ in this particular bookshop???? I must know!) I could keep going on about how much this story captivated me – the atmosphere, the family gift, the characters, the setting – but I’m starting to repeat myself again lol.

Bottom Line: This book had me at ‘book magic’ and wrapped me up in its unique plot from start to finish! Readers will be immediately drawn to Pippin and her mystery-filled family history … and to watching Pippin begin to unearth the secrets that have swirled through Devil’s Cove – and her family line – long enough. I really enjoyed the set-up, the plot, the characters and the setting; they all added intriguing layers to the story, although there was perhaps a bit too much descriptive narrative from time to time. Murder in Devil’s Cove toes the line between a cozy and traditional mystery, but it’s a mix that works well. I’m looking forward to the rest of this series!

Reviewer’s Note: Readers may want to be aware that there is some scattered cursing and profanity in this novel. 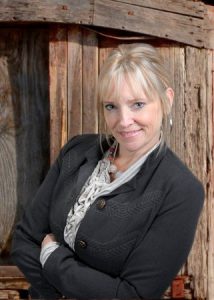 Melissa Bourbon is the national bestselling author of nineteen mystery books, including the brand new collaborative Book Magic mysteries, the Lola Cruz Mysteries, A Magical Dressmaking Mystery series, and the Bread Shop Mysteries, written as Winnie Archer. She is a former middle school English teacher who gave up the classroom in order to live in her imagination full time. Melissa, a California native who has lived in Texas and Colorado, now calls the southeast home. She hikes, practices yoga, cooks, and is slowly but surely discovering all the great restaurants in the Carolinas. Since four of her five amazing kids are living their lives, scattered throughout the country, her dogs, Bean, the pug, Dobby, the chug, and Jasper, a cattle dog/lab keep her company while she writes. Melissa lives in North Carolina with her educator husband, Carlos, and their youngest son. She is beyond fortunate to be living the life of her dreams. 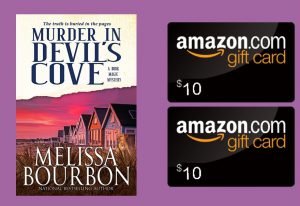 What about you? What makes you want to read Murder in Devil’s Cove by Melissa Bourbon?

18 responses to “Book Review (and a Giveaway!): Murder in Devil’s Cove by Melissa Bourbon”