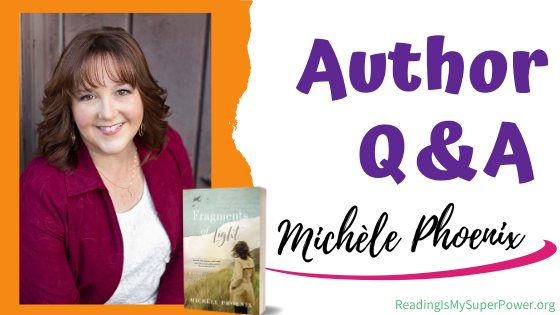 I am absolutely delighted to welcome Michèle Phoenix to the blog today to chat about her newest novel, Fragments of Light! 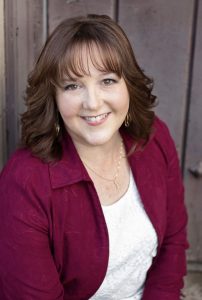 Born in France to a Canadian father and an American mother, Michèle is an international writer and speaker. A prominent advocate for Third Culture Kids, she travels globally to consult and teach on topics related to this unique people group. Michèle is a three-time cancer survivor who understands the gift in every breath and milestone. She is inspired by good conversation, investigative travel and paths to healing. 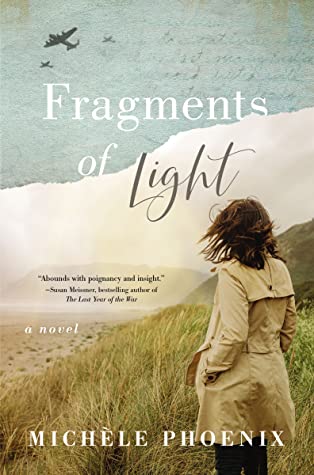 An impossible decision in the chaos of D-Day. Ripples that cascade seventy-five years into the present. And two lives transformed by the tenuous resolve to reach out of the darkness toward fragments of light.

Cancer stole everything from Ceelie—her peace of mind, her self-image, perhaps even her twenty-three-year marriage to her college sweetheart, Nate. Without the support of Darlene, her quirky elderly friend, she may not have been able to endure so much loss.

So when Darlene’s prognosis turns dire, Ceelie can’t refuse her seemingly impossible request—to find a WWII paratrooper named Cal, the father who disappeared when Darlene was an infant, leaving a lifetime of desolation in his wake.

The search that begins in the farmlands of Missouri eventually leads Ceelie to a small town in Normandy, where she uncovers the harrowing tale of the hero who dropped off-target into occupied France.

Alternating between Cal’s D-Day rescue by two young French sisters and Ceelie’s present-day journey through trial and heartbreak, Fragments of Light poses a timeless question: When life becomes unbearable, will you press toward the light or let the darkness win?

And check out this great book trailer!!

Hi Michèle! Welcome to the blog!

Michèle: At the risk of becoming a cat-lady stereotype, I adopted a seven-month-old kitten in February, just before COVID hit. Best. Decision. Ever.


Carrie: aww what a great time to have an adorable new companion!

Michèle: Mountains! Listen, I’ve tried to be a beach girl, but they’re just too sunny, too sandy and too bathing-suity. Mountains make me feel their power and heft. I feel safe surrounded by them.


Carrie: LOL i am totally with you on this!

Michèle: I’m a carbs kind of girl. Which means French onion soup (with floating cheese-toast on top) might make the cut, but give me a sandwich with crusty European bread and I’ll be a happy camper.

Michèle: Teleportation. The kind that would not only allow me to transport myself to other places, but also to other times—with the added bonus of being able to escape back to a modern-day setting when things get too hinky in the past. 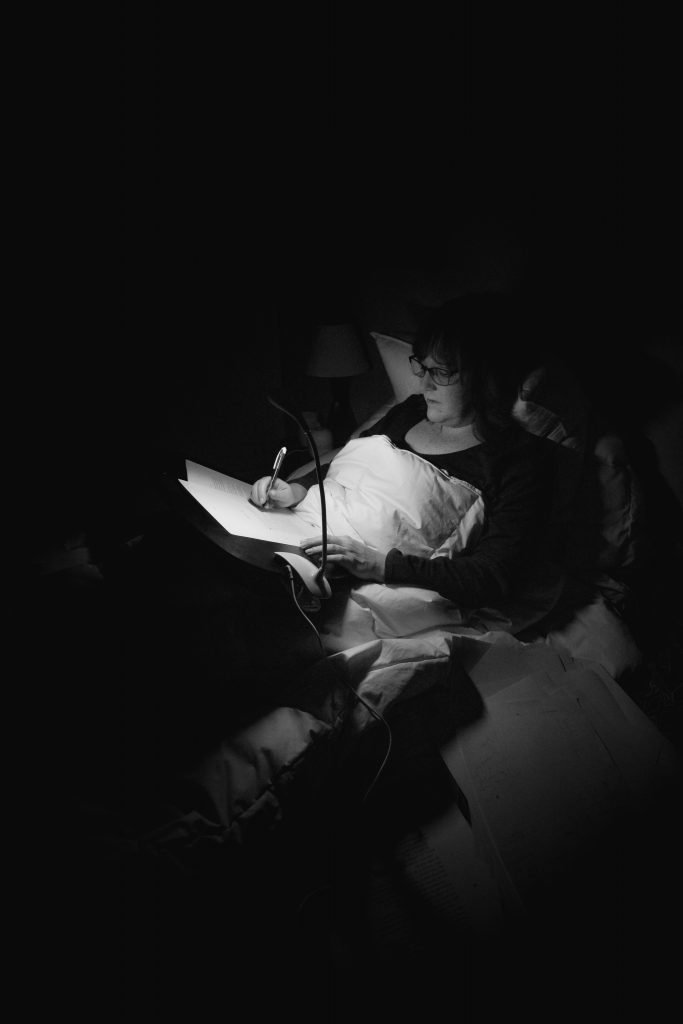 Michèle: For minor editing, I’ll go to my favorite local coffee shop. But for heavy-duty writing, it’s my guest bedroom—blackout curtains pulled so the room is completely dark, a pile of pillows and down comforters surrounding me on the bed, a small fan running on low, some essential oils and a cup of chai tea. It’s a calming, enveloping cocoon in which my imagination can freely wander and time doesn’t matter.

Carrie: i love that! such a great set-up!


Q: What surprised you about Fragments of Light or your characters as you wrote their story?


Michèle: I didn’t see Darlene coming. I was halfway through Chapter One, in which Ceelie wakes up post-surgery in a hospital room, when in my mind the door opened and Darlene came waltzing in—an effusive 74-year-old with pink-tipped hair who wears bedazzled exercise outfits and drives a PT Cruiser with custom turquoise paint. That was it. I loved her sight. Claire, Darlene’s deceased mother, wasn’t in my planning for the book either, but she became the anchor point I needed between the past and the present. And Darlene’s assortment of garden gnomes—I never saw those coming! (A few months into the writing, I actually came across a brick-carrying gnome that looked exactly like her “Masto-gnome” in an antique mall in South Carolina! I love it when serendipity validates inspiration.)

Carrie: I love that inside peek into how these characters ‘stole the show’, so to speak, during your writing process 🙂


Michèle: As much as I’d like to be one of those authors who plot out their books, scene by scene, before starting the first chapter, I’m afraid I’m the opposite. A new book usually begins with a single spark in my mind—a face, a location, a sound—that is so clear and so insistent that I can’t ignore it.

With Fragments of Light, it all started with a voice. I was holed up in a cabin in the far reaches of the Ozarks for three days, hoping that inspiration for book #5 would reveal itself to me as I sat in silence, without WIFI or distractions, watching bald eagles circle overhead. I let my mind wander.

After two days, as I began to doubt that anything would happen, I began to hear voices—not audible to anyone else, but so real to me in their texture and tone. The first one was seven-year-old Lise’s saying, “I was dreaming about carousels the night the sky got loud.” (It’s still the opening line of the book.) I had no idea who she was or how carousels would fit into the story, but I got the sense that this was a child daring to be hopeful when her world told her to be scared. She had my undivided attention. 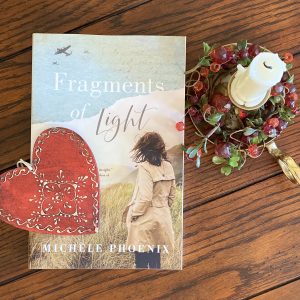 The story continued to reveal itself to me in the following weeks, as I carved out the time to be still and listen. In a sense, I write like I watch a movie, taking “dictation” from characters who manage to surprise even me. For Ceelie’s character, I drew on my own experience as a three-time cancer survivor, but was dumbfounded by her husband’s decision early in the book. I outlined potential stages of healing, holding them loosely as I wanted to give her the power to direct her own path. For Cal’s narrative, I very roughly plotted a possible arc of increasing tension. His timeline is so short—only three days in 1944—so I needed to make sure his scenes played out meticulously and ended with mini-cliffhangers. Honestly, I didn’t know until I wrote the conclusion of his story what had happened to upend his life so dramatically.

Looking back at those initial notes I took, it’s clear to me that the story did indeed have a mind of its own. Few of the bullet points I jotted down in the middle of the night or at the grocery store or dictated into my phone while driving actually made it as such into the final version of the Fragments of Light.


Carrie: oh wow! this makes me even more eager to read it than I already was!!


Q: What do you most want readers to take away from Fragments of Light?

Michèle: One word: brave. Whether our circumstances are dire or merely challenging, we might forget that we have unclaimed resources to draw on—the kind we’ll need to reach toward the light from the darkest of places.

The original title of the book was actually Chasing Brave. There are so many facets of bravery in both the contemporary and historic storylines of Fragments of Light. Ceelie’s bruised resilience. Darlene’s rugged optimism. Nate’s white-knuckled determination. Sabine’s beyond-her-years stoicism. Even Cal, whose decision after returning home from the war paints him as something of an antihero, displays a flawed sort of courage, a sacrificial commitment to what he thought was right under unfathomable circumstances.

All of the book’s protagonists embody their own version of “brave”—a resolve that plays out in brutal scenes of conflict and in small, ordinary, deeply human moments.


Carrie: “we might forget that we have unclaimed resources to draw on” –  i love this! yes!

Michèle: Darlene is one of my favorite people—real or fictional! At one point in the novel, when Ceelie is bemoaning her husband’s failures, Darlene says, “Honey, a good man is as rare as rocking horse poo.” It’s not exactly Shakespearian, but it epitomizes who she is.

On a more profound note, the line that best summarizes the novel is spoken when Nate and Ceelie visit the castle in Normandy where Darlene’s father was stranded during WWII: “History’s stains illuminate the future.” 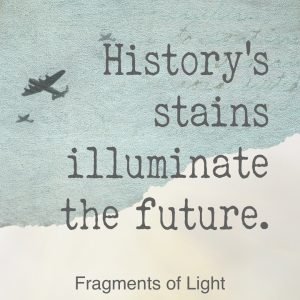 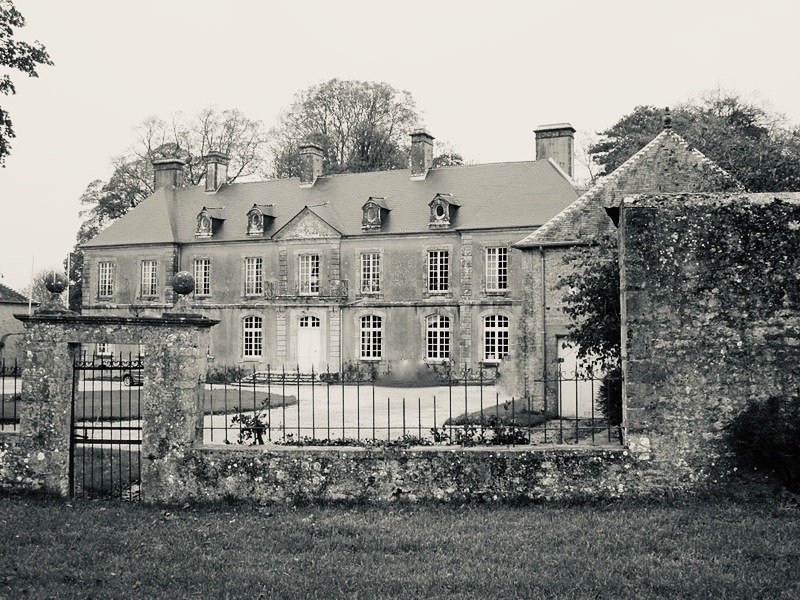 Carrie: laughing at Darlene’s quote – and wow that quote from the castle scene is so powerful…

Michèle: Like everyone else, I’m navigating these uncharted COVID waters with trepidation and determination. My real career is in ministry (advocating for the children of missionaries) and that work has gone mostly digital. But I love to fill the margins of my life with creative endeavors, so I’m waiting for that face or voice or place to insert itself into my consciousness and spark a new novel.

Michèle Phoenix is offering a print copy of Fragments of Light to one of my readers! (US only. Void where prohibited by law or logistics.) This giveaway is subject to Reading Is My SuperPower’s giveaway policies which can be found here. Enter via the Rafflecopter form below.


What about you? What makes you want to read Fragments of Light by Michèle Phoenix? What did you enjoy about Michèle’s answers?

32 responses to “Author Interview (and a Giveaway!): Michele Phoenix & Fragments of Light”