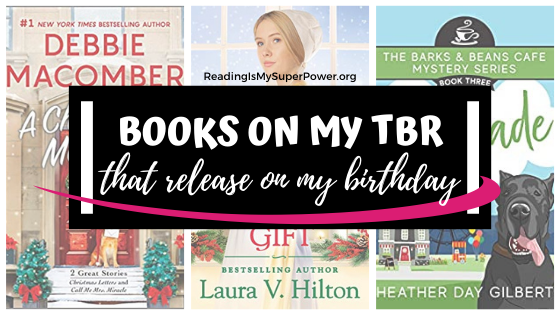 Happy Tuesday! Today’s Top Ten Tuesday theme is our Fall TBR list but I did a week’s worth of that topic last month so I’m tweaking it just a tad. Instead I’m talking about books releasing on my birthday this year that I really want to read! We’ve still got a month to go before they release & I turn an untold year older so I’m hoping to work them into my review schedule by then 🙂 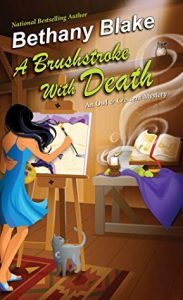 Bethany Blake, author of the nationally bestselling Lucky Paws Petsitting Mysteries, launches a charming new spinoff mystery series featuring an artist and art teacher with a magical gift for solving murders. Near the creek that runs behind her Pennsylvania house, Willow Bellamy has converted an old barn into an art school–though the place does still have some animal inhabitants, including Rembrandt, the owl who lives up in the rafters. And while it’s important for any artist to have a vision, Willow can sometimes see things others can’t, just like her mother and grandmother before her. Not that she would exactly call herself a witch… When some local merchants gather in the studio for a painting party, they focus their attention on a still life with flowers and an assortment of garden tools, including antique pruning shears that disappear–at the same time despised restaurant owner Evangeline Fletcher is murdered. Willow must use all her gifts to find the killer, although it means teaming up with a handsome, mysterious detective whom Willow fears she may have accidentally conjured from a canvas. This investigation is sure to be a hoot… 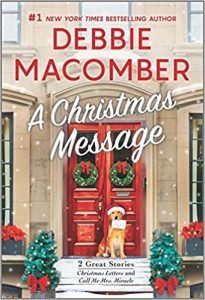 
This season, discover the magic of two classic heartwarming stories and the message of love and giving at Christmas! Christmas Letters Katherine O’Connor spends her days at a cozy café writing Christmas letters for other people. She’s good at making their everyday lives sound more interesting. But for renowned child psychologist Dr. Wynn Jeffries, who also frequents the café, Christmas means deception. Katherine argues with Wynn about his theories while he argues that her letters are nothing but lies. Call Me Mrs. Miracle For Jake Finley, owner of Finley’s Department Store in New York City, Christmas means only one thing to him: profit. The holiday was destroyed for him by a tragedy years before. But now he needs a Christmas miracle to keep the business afloat. Holly Larson needs a miracle, too. Her nephew’s father won’t be home for Christmas, but at least she can get him the one gift he desperately wants. If she can figure out how to pay for it… Fortunately, it’s Mrs. Miracle to the rescue. 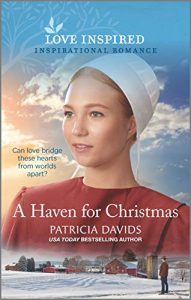 An Amish widow. An Englisch cowboy. And a Christmas to remember. An accident landing an Englischer on Becca Beachy’s farm isn’t quite the peaceful Christmas she expected. But with the widow struggling after an emergency, Tully Lange’s help is a blessing. Now Becca’s determined to give the cowboy a true Amish Christmas. But even as she falls for him, she knows their love is forbidden. Will this be the start of forever or the beginning of goodbye? 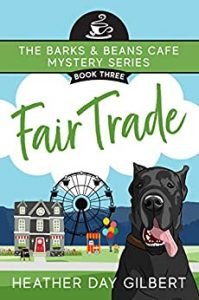 With the one-year anniversary of the now-successful Barks & Beans Cafe approaching, siblings Macy and Bo Hatfield set up an iced coffee booth at the state fair. Taking a break from brewing, Macy bumps into Carolina, a long-lost childhood friend who’s now sitting pretty as a country superstar. Macy tries not to fangirl too hard when her old friend extends an invitation to meet the rest of the Carolina Crush band before their opening show. But when Carolina falls victim to not one, but two near-death experiences, Macy takes it upon herself to find out who has it in for her old friend. Fortified with plenty of roasted corn, cinnamon rolls, and her brother’s signature iced maple latte, Macy takes to the Ferris wheel to get the lay of the land from the air. She discovers too late that this year’s fair isn’t all fun and games…but she’s already locked in for the ride. 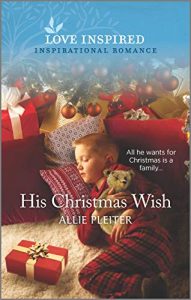 
To make his little nephew happy, this bachelor will need help… After his nephew, Cole, is orphaned, Jake Sanders vows to give the little boy the best Christmas possible…except Jake doesn’t know the first thing about kids! So when Cole’s preschool teacher, Emma Mullins, offers to pitch in, Jake’s grateful for her guidance. But while Jake and Emma share an immediate connection, their blossoming love must first survive the secret she’s hiding… 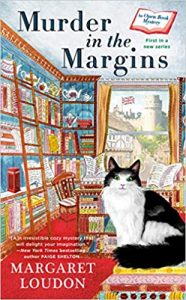 The plot thickens for American gothic writer Penelope Parish when a murder near her quaint British bookshop reveals a novel’s worth of killer characters. Penelope Parish has hit a streak of bad luck, including a severe case of writer’s block that is threatening her sophomore book. Hoping a writer in residence position at The Open Book bookstore in Upper Chumley-on-Stoke, England, will shake the cobwebs loose, Pen, as she’s affectionately known, packs her typewriter and heads across the pond. Unfortunately, life in Chumley is far from quiet and when the chairwoman of the local Worthington Fest is found dead, fingers are pointed at Charlotte Davenport, an American romance novelist and the future Duchess of Worthington. Charlotte turns to the one person who might be her ally for help: fellow American Pen. Teaming up with bookstore owner Mabel Morris and her new friend Figgy, Pen sets out to learn the truth and find the tricks that will help her finish her novel. 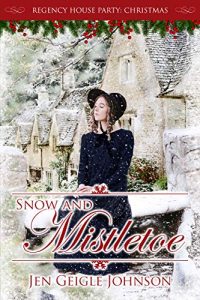 
To be wealthy and alone is but a blessing, or so she thought. Lady Theodosia will never accept another proposal. Mr. Easton will never ask. But never is a risky word. Dosie–if she had friends, they would call her such–agreed to attend her grand uncle’s house party because she loved the dear man. But she knew it would be dreadfully lonely. So she reached out to an acquaintance she knew couldn’t possibly be interested in marriage and invited him to come as her friend.Julian accepts in desperation to get out from under Edward’s thumb. As he lines up multiple house parties in a row, he determines to find a way to make his own living. Nothing at the party goes as they plan, and when both start having feelings, Dosie’s fears and past come barreling back to haunt her while Julian’s realization that he’s woefully unprepared to support a wife rocks his foundations. 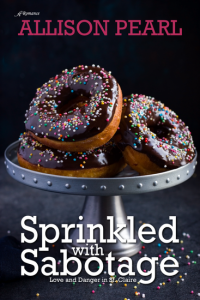 
Lizzy Bennet loves life as a lawyer in the city. And not just because of the miles it puts between her and her ex. However, when she’s attacked on the street just hours after learning her identity was stolen, she tries to call home for help and ends up with the last person she expects: the very same high school boyfriend who broke her heart. He says he’s there to help, but she’s not so sure, and now, all the endless questions and regrets are clouding her judgment and preventing her from seeing the dangerous saboteur closing in. Small-town auto mechanic, Koby Knightly, is looking forward to seeing a car show in the city. But when an unexpected call from his old girlfriend disconnects suddenly, he rushes to her aid. Throwing his plans out the window, Koby makes it his mission to protect her and discover the identity of the person trying to frame her. Will he also be able to figure out what went wrong between them back in high school or will a killer get to her first? 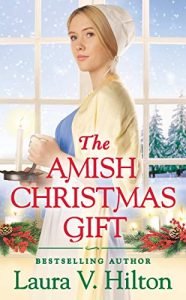 Elsie Miller has witnessed — and experienced — Levi Wyse’s forgetfulness too many times to count. But even after they broke things off, Elsie never forgot the handsome Amish toymaker or her love for him. So when Levi’s sister asks her to help keep him organized for the busy Christmas season, Elsie agrees. But she didn’t expect working alongside Levi to reignite those old feelings. Secretly, Levi’s heart will always belong to Elsie. But she deserves a better man, one who isn’t so absentminded . . . or responsible for a terrible tragedy. Now, she’s at his workshop every day and as Christmas draws near, his reasons for staying away become harder and harder to remember. Will the spirit of Christmas heal past hurts and give Elsie and Levi the greatest gift of all: a future together? 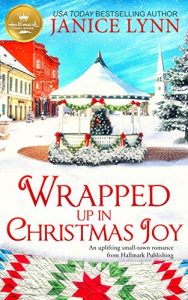 
When Sophie Davis sorts through a box of donated books to her church, she’s surprised to discover a soldier’s journal. As the daughter of a veteran who watched her father struggle over the years, she feels a deep connection to the man who wrote the emotional entries. Former Marine Cole Aaron battled to find peace after returning to civilian life. He’s always needed to protect others. Now, fighting fires in Pine Hill, Kentucky helps him put out the demons within him. When Sophie shows up at the fire hall with his journal from when he’d first returned stateside, Cole can’t believe it was in the box he’d donated. Not wanting to face painful memories, he tells her to trash it. Sophie and Cole are drawn together as they both volunteer for their community, but it’s hard for Cole to let down his guard, and he doesn’t need anyone’s pity. After all he’s been through in the past, can he find faith in a more hopeful future…one touched by joy?

What about you? Do you know of any books that released / are releasing on your birthday this year? Which of the books releasing on my birthday do you want to read too?

6 responses to “Top Ten Tuesday: Books Releasing On My Birthday That I Really Want to Read”