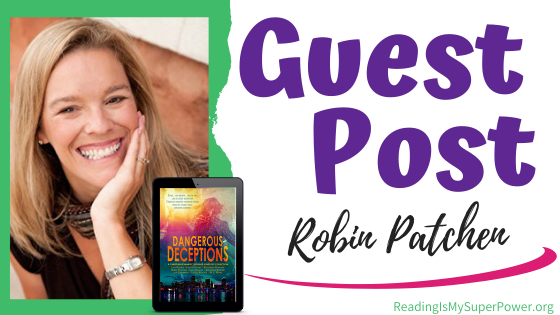 I’m always delighted to host Robin Patchen on the blog & today she’s here to chat about her new novel Glimmer in the Darkness, part of the 9-author romantic suspense boxset Dangerous Deceptions (only $0.99!!) 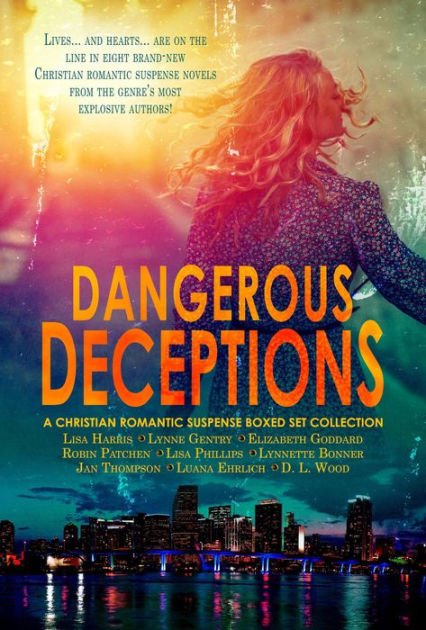 
Lives…and hearts…are on the line in eight brand-new Christian Romantic Suspense novels from the genre’s most explosive authors.

Virus hunter Aiden Ballinger believes the source of the lethal outbreak that decimated a remote Tibetan village came from disturbing the permafrost. Desperate to rebury it before it buries the world, Aiden enlists Rachel Allen, a beautiful epidemiologist. But while Aiden and Rachel pursue the cure—and their feelings for each other—someone is hunting them. Whoever wants them dead will not stop until they are silenced.

His cover blown, FBI Special Agent Reg Jacobson finds refuge on the other side of the country, but trouble follows him when he faces off with a woman from his past. Private Investigator Nicole Weatherly, hired to catch a thief, suspects Reg. When the bullets fly, Reg and Nicole must escape secrets from their pasts before their futures collide.

Glimmer in the Darkness: Robin Patchen

When Cassidy learns another child has been kidnapped from her hometown, she’s convinced the man who took the girl she’d been babysitting seven years earlier is behind the recent abductions. She alone holds the key to finding him. Though James blames Cassidy for his sister’s death, he’ll help if there’s a chance to save a child’s life. Can Cassidy and James identify the serial killer in time to rescue his latest victim?

A man after justice. A local crime boss. The woman caught between. Undercover FBI agent Will Briar is working his way to the top of an illegal operation. But when he discovers the identity of the boss, everything changes. Hollis knows nothing is as it seems. Now she must either save her father and doom herself, or take a chance on the man who could be the answer…to everything.

Camryn Hunt witnessed a murder. Now she’s under the protection of handsome small-town sheriff Holden Parker. The gorgeous island location, and break from her dreary life, might be pleasant if the sheriff wasn’t so demanding. Determined that no harm come to Camryn, Holden secludes her at his home. He only wishes she didn’t intrigue him so thoroughly. Attraction only complicates things. Especially when the murderers arrive at his door. It’s going to take all his wits to save her.

The last thing Private Investigator Earl Young expects is to pose as a fake boyfriend to a whistleblower. His driving need to solve problems forces him to work with paranoid Sienna Halstead as she draws him deeper into her corporate world of secrets and subterfuge. The more time they spend together, the more attraction grows. When another whistleblower is murdered, Sienna knows she’s next. How far will Earl go to protect her?

Is CIA operative Ben Mitchell really in love with the daughter of a Turkish dissident? Titus Ray, his mentor, isn’t buying it; he thinks Ben needs intel on a Muslim cleric. But when Titus follows Ben to northern Virginia, he discovers Ben’s deception is more dangerous than he thought. With their lives on the line, can Titus convince Ben to abandon his plans before it’s too late?

When disbarred attorney Quinn Bello discovers a body that inexplicably vanishes, no one in her seaside town believes her—no one, that is, except newcomer Ian Wolfe, who for his own mysterious reasons doesn’t hold Quinn’s past against her. Together they search for the truth, but doubts about Quinn’s sanity and innocence increase as the danger escalates. Will they expose the heart of the deception before Quinn becomes the next victim?


by Robin Patchen, author of Glimmer in the Darkness


On her eighteenth birthday, Nancy (not her real name) called my daughter, Lexi, begging for a place to stay. The girls had been coworkers months before, barely even friends. But Nancy was desperate. I’d never met her before she showed up at our house that night with a duffel bag, but I changed the sheets on the bed in the extra room and told her to make herself at home, thinking she’d be there a few days until she figured things out. She stayed for four months.

Nancy had been passed around from mother to grandparents to friends for most of her childhood. She’d never met her father, and her mother had been missing for years. Nancy had no home. She had no reliable support. She had no safety net. 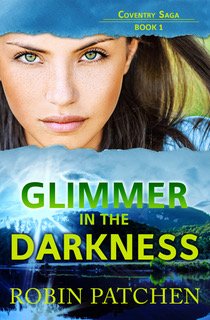 When I started brainstorming Glimmer in the Darkness, I decided my heroine, Cassidy Leblanc, would be a bit like Nancy. A foster kid who, thanks to events beyond her control, was thrust into the world at only seventeen to figure things out.

The fictional Cassidy, a fugitive suspected of kidnapping and murder, bussed as far away from Coventry, New Hampshire, as she could get and landed in Portland, Oregon. There, she shaved a year off her age, pretending to be 16, and found a home for cast-off and runaway girls that took her in, helped her finish high school, and gave her a scholarship to college.

Cassidy was smart, though. And lucky. Most foster kids aren’t so fortunate.

To quote Cassidy in Glimmer in the Darkness, “Did you know that twenty percent of kids who age out of foster care become instantly homeless? Twenty-five percent suffer PTSD. Sixty percent of men will be convicted of a crime, and seventy percent of women will get pregnant before age twenty-one.”

Most kids in America age out of foster care at eighteen. Many have foster parents who’ll support them as they finish high school, maybe even go on to college. Others end up on the street to fend for themselves. There are homes for such kids, but they are few and far between, and many young people don’t know how to find them and, for whatever reasons, don’t try to. They think they can make it on their own. But life for a teenager with no safety net is not easy.

Glimmer in the Darkness isn’t about the foster care system. In fact, Cassidy’s background is only mentioned a handful of times. But her lack of a family, her lack of a home, has shaped who she is. As she explains to the hero, who was raised by loving and stable parents, “Nobody like you could ever understand what it’s like not to have a family.”

Be thankful for your family today, and maybe see if there are any Nancys or Cassidys in your community who need a helping hand.

I am not only blessed to have an amazing family but also to have wonderful friends. Eight friends and I have teamed up to put together this wonderful boxset, eight brand-new, full-length novels for only 99¢. 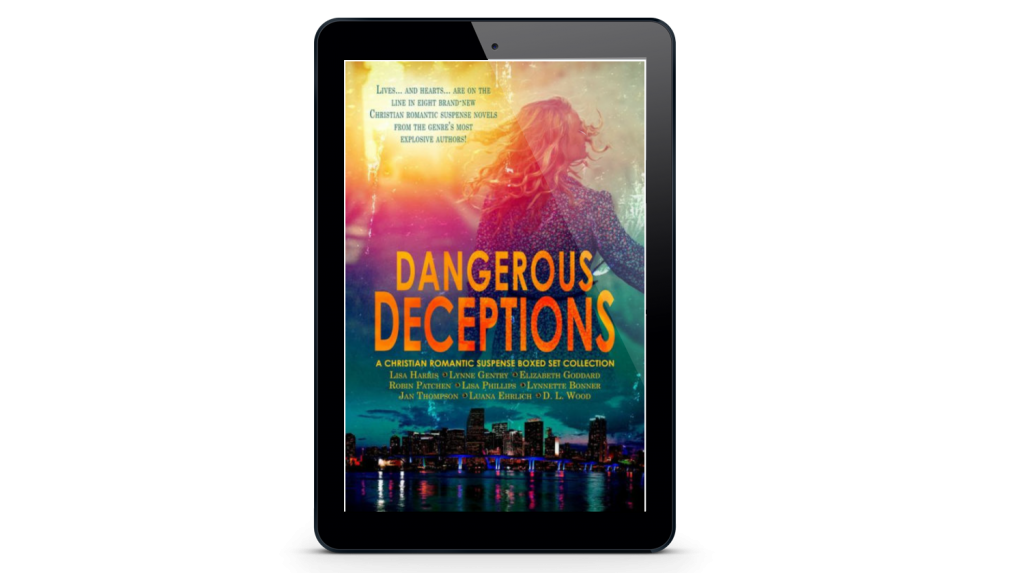 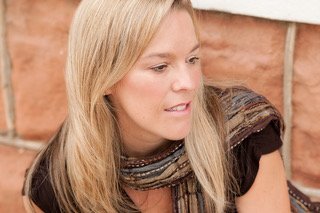 Aside from her family and her Savior, Robin Patchen has two loves—writing and traveling. If she could combine them, she’d spend a lot of time sitting in front of her laptop at sidewalk cafes and ski lodges and beachside burger joints. She’d visit every place in the entire world—twice, if possible—and craft stories and tell people about her Savior. Alas, time is too short and money is too scarce for Robin to traipse all over the globe, even if her husband and kids wanted to go with her. So she stays home, shares the Good News when she can, and writes to illustrate the unending grace of God through the power and magic of story. 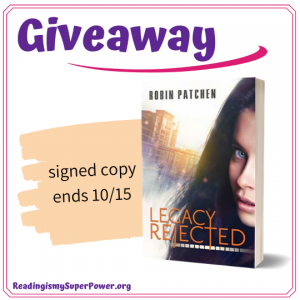 Robin Patchen is offering one of my readers a signed copy of Legacy Rejected! (US only. Void where prohibited by law or logistics.) This giveaway is subject to Reading Is My SuperPower’s giveaway policies which can be found here. Enter via the Rafflecopter form below.


What about you? What makes you want to read the Dangerous Deceptions box set, including Glimmer in the Darkness by Robin Patchen?