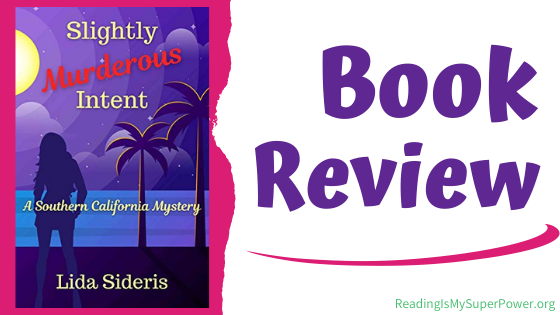 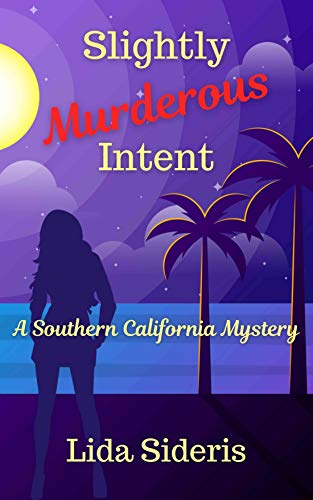 There’s a shooter on the loose who keeps missing his target. But that doesn’t stop him from trying again…and again. It’s up to rookie lawyer and spunky sleuth, Corrie Locke, to find the gunman before he hits his mark…D.A. James Zachary, Corrie’s hunky and complicated frenemy.

When Corrie is stuck with more questions than answers, she enlists a team with various strengths, weapons and cooking skills to help her find the shooter. Computer whiz/boyfriend Michael is onboard. So is former security guard, Veera. Toss in an over-the-hill informant and a couple of feuding celebrity chefs and Corrie’s got her very own A-Team. Okay, maybe it’s more like a B-Team.

Can Team Corrie hunt down the shooter before he scores a bulls-eye?

Slightly Murderous Intent is a quirky mystery with plenty of twists and turns to throw you off the scent of the real culprit. I was surprised by the ending, though maybe I shouldn’t have been. I was also intrigued by the (I’m assuming) continuing story arc of the mystery surrounding Corrie’s dad’s death. It’s not a huge focus of this book but it clearly motivates her in her crime solving endeavors & stays at the back of her mind. It will be interesting to see how it ultimately plays out & who ends up being involved.

This is the first book in the Southern California Mystery series that I’ve read & I think maybe it would have helped to have read the other 3 books first. I had a difficult time connecting to the characters, and they all felt pretty one-dimensional. Again, maybe because I didn’t get to know them beforehand.

Bottom Line: Slightly Murderous Intent keeps mystery solvers hopping with surprising twists and multiple suspects. While I think it could have been tighter as far as length & content editing, and I wish the characters had felt more developed, overall it’s an entertaining story.

Reviewer’s Note: Readers may want to be aware that this book does contain some mild cursing scattered throughout.

Lida Sideris is an author, lawyer, and all-around book enthusiast. She writes soft-boiled mysteries and was a recipient of the Helen McCloy Mystery Writers of America scholarship award. Slightly Murderous Intent is #4 in her Southern California Mystery series, published by Level Best Books. Lida lives in the northern tip of SoCal with her family, rescue dogs and a flock of uppity chickens.  To learn more, please visit: www.LidaSideris.com

What about you? What makes you want to read Slightly Murderous Intent by Lida Sideris?

16 responses to “Book Review (and a Giveaway!): Slightly Murderous Intent by Lida Sideris”