Welcome to the Blog + Review Tour & Giveaway for Quest of Fire: Succession & The Gathering Dark by Brett Armstrong, hosted by JustRead Publicity Tours! I’m delighted to host Brett on the blog today to share a favorite quote from the Quest of Fire series and something he learned while writing these books!

Son of the Northern Realm’s Defender, raised among the dwarfs of Ordumair, Meredoch was anticipated to succeed his father. Some whispered he would bring the longed-for peace between Ordumair and their ancient foe, Ecthelowall. All of that changes when Ordumair’s Thane is killed and Meredoch and his family are exiled. From prestige to poverty, the young boy must chart a new course.

As the years pass and the idol that was his father’s legacy tarnishes, his past threatens to resurface. An artifact of immeasurable worth to Ordumair is found and if recovered by the cruel Elder Ulster it means disaster for those Meredoch cares about. Battling creatures he believed only myths and racing Ulster’s minions to the prize, Meredoch must face the truth of his place in the world and claim his right of succession.

Jason is an expert at running from his past. But when it catches up, he finds himself hiding in a peculiar inn listening to a tale from centuries past.

The story is Anargen’s, a teen who is pulled from all he loves to follow his oaths of loyalty to the fabled King of the Realms. Together with his mentor, Cinaed, he rides north on a special quest to mediate peace talks between ancient foes—the men of Ecthelowall and the dwarfs of Ordumair. Nothing goes as planned. Many on both sides of the dispute despise Anargen’s Order. Worse, an arcane evil has returned to the North. This “Grey Scourge” seeks to ruin the peace talks and ensure a lost treasure held by the dwarfs is never found by those for whom it is meant.

As Anargen’s story unfolds, Jason begins to wonder whether it is truly just a fable. He soon finds himself drawn into the conflict Anargen faced. A battle which has shaped and can destroy his world. 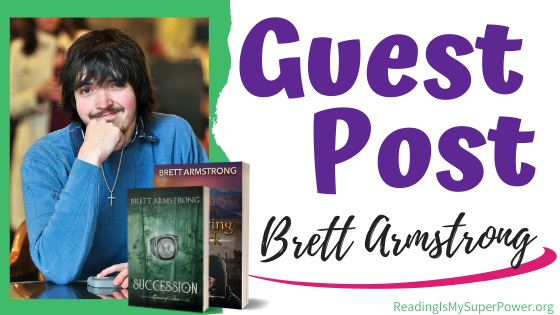 In the silence that followed, Meredoch tested them aloud. “Once you can see one, you will see them all.”

Those lines from Succession have really resonated with me. It took a while for me to fully grasp how those words had developed into a core theme of the book. It really underscores the centrality in both The Gathering Dark and Succession of the theme forgiveness and compassion in the face of great injury.

It’s a tendency of human nature to very quickly reduce those with whom we have conflict to caricatures. We stop seeing them as people and start to view them as obstacles to our well-being. This becomes especially dangerous if we start to blanket apply this thinking to all people of a particular group. In Succession, Meredoch wrestles with this because of how he was treated in Ordumair and how the Ords revile him and the Knights of Light. Later, during the events of The Gathering Dark, Anargen faces the same hatred and mistreatment from the Ords. It would be very easy, for them to hate the Ords in kind. In fact, there comes a point where Meredoch has the opportunity to claim the revenge he wants and get away with it. To onlookers it would seem he was doing something honorable, but he knows it will ultimately destroy an Ord who has particularly wounded him. How he chooses to act in that moment has ripple effects that carry decades later into Anargen’s day. And those events in turn carry into Jason’s life still centuries further. Not to say our daily choices can ruin things for generations of people, but they do carry consequences we can’t always anticipate. Sometimes forgiving one person can become a gateway to healing and being able to rightly see a whole group of people as those created by and for God.

I feel like Pastor Richard Wurmbrand who founded Voice of the Martyrs said it far better than I’m able. He and those he loved suffered terrible persecution and injury at the hands of atheistic Soviet invaders. But he said he was, “looking at men… not as they are, but as they will be… I could also see in our persecutors. a future Apostle Paul… (and) the jailer in Philippi who became a convert.” I was struck by how in Tortured for Christ he described making deliberate overtures to reach the individuals who represented the communist system he despised. He saw an individual and thereby could see beyond their evil to who they could be if he allowed God to use him as a light in the darkness. It also brings to mind a pair of verses from Scripture:

“bearing with one another and, if one has a complaint against another, forgiving each other; as the Lord has forgiven you, so you also must forgive.”  – Colossians 3:13, ESV

“Consider Him who endured from sinners such hostility against Himself, so that you may not grow weary or fainthearted.” – Hebrews 12:3, ESV

I realize the Apostle Paul was directing in Colossians to have peace and forgiveness amongst believers first and foremost, but I can’t help wonder, what kind of forgiveness did and does Christ bestow? What kind of love? It was a love that from the cross called out, “Father, forgive them, for they know not what they do.”* Choosing to endure indescribable suffering and still continue to forgive those who hurt Him, even though He knew full well most would only hate Him all the more. Meredoch and Anargen each face that choice of whether they would forgive in like manner and as I said, those choices shape the direction Quest of Fire ultimately takes. And I can’t help but treasure any time I can see within a story a glimpse of something that reminds me of my Savior.

Brett Armstrong has been exploring other worlds as a writer since age nine. Years later, he still writes, but now invites others along on his excursions. He’s shown readers haunting, deep historical fiction (Destitutio Quod Remissio), scary-real dystopian sci-fi (Day Moon and Veiled Sun), and dark, sweeping epic fantasy (Quest of Fire). Every story is a journey of discovery and an attempt to be a brush in the Master Artist’s hand. Through dark, despair, light, joy, and everything in between, the end is always meant to leave his fellow literary explorers with wonder and hope. Always busy with a new story, he also enjoys drawing, gardening, and spending time with his wife and son.

(1) winner will receive a story inspired prize package including:
• One copy of The Gathering Dark and Succession (Winner’s choice print or e-book)
Custom signed bookplates for each if print chosen
• One copy of Wardrobes, Wizards, and Halflings: A Faith in Fiction Devotional (Winner’s choice print or e-book)
• Two pieces of book swag (winner’s choice from bookswag pics)
• Flash Drive with Digital print of previously unreleased The Gathering Dark artwork, MP4 of Quest of Fire’s theme music “Lament for Father” and Digital poster “The Making of Wirgerd” describing the visual and story development of Succession’s monstrous villain!

Be sure to check out each stop on the tour for more chances to win. Full tour schedule linked below. Giveaway will begin at midnight October 26, 2020 and last through 11:59 PM EST on November 2, 2020. Winner will be notified within 2 weeks of close of the giveaway and given 48 hours to respond or risk forfeiture of prize. US only. Void where prohibited by law or logistics.

What about you? What makes you want to read the Quest of Fire series by Brett Armstrong?

6 responses to “Guest Post (and a Giveaway!): Brett Armstrong & the Quest of Fire series”