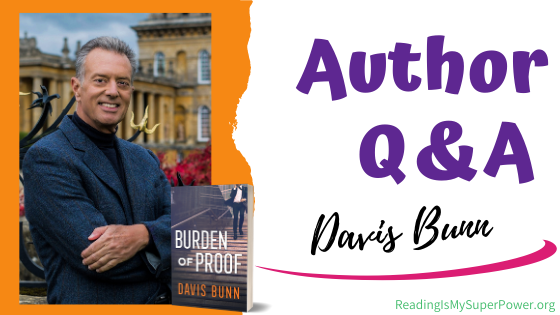 So honored today to welcome Davis Bunn to the blog to chat about his new novel, Burden of Proof! 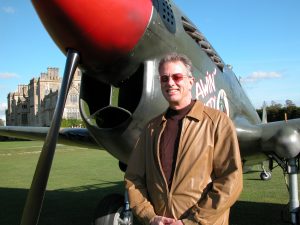 Davis Bunn’s novels have sold in excess of eight million copies in twenty-four languages.  He has appeared on numerous national bestseller lists, and his titles have been Main or Featured Selections with every major US bookclub.   Davis serves as Writer-In-Residence at Regent’s Park College, Oxford University.  Davis has appeared on the covers of Southern Writers Magazine, Publishers Weekly, and Christian Retailing, and his recent titles have earned him Best Book of the Year and Top Pick awards from Library Journal, Romantic Times, Publishers Weekly, Booklist, and Kirkus.  Davis was recently granted the Lifetime Achievement award by the Christy board of judges. 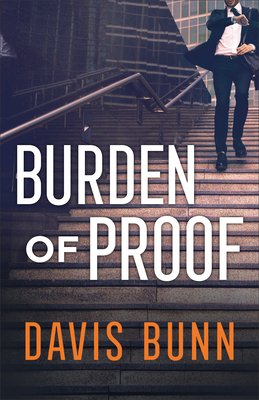 A few months before his twenty-first birthday, Ethan missed the chance to save his brother’s life. Adrian was murdered on the steps of the courthouse in Jacksonville, Florida. Ever since that fateful day, Ethan has sensed a deep disconnect between the man he should have been and the one he has become. His days play out a beat too slow, his mind rehashing the scene of his failure again and again.

When Adrian’s widow appears, asking for his help in uncovering what was really behind his brother’s death, Ethan is stunned. The legal case they were pursuing was more far-reaching than he could have imagined–it could even threaten the global power structure.

Ethan joins the search for answers at the ultimate cost. As he enters into his own past, will he discover a means to redeem the future?

Hi Davis! Welcome to the blog!

Carrie: I’m with you!

Davis: We’re entering into winter here in England, so I’ll have to go with summer.


Carrie: As dreary as we hear winters in England are, that might be enough to make me pick summer too. But probably not lol – let it snow!

Davis: I was raised a dog guy, but my wife is converting me slowly but steadily.


Carrie: As long as you don’t give up on dogs completely 🙂

Davis: Coffee first thing every morning, tea the rest of the day.


Carrie: that extra caffeine punch in the morning is key!

Davis: Meeting the challenge of the empty page.


Davis: My favorite two bookstores in the whole world have a central table draped in velvet cloth, and on this are the favorite recent reads by all the people who work in the store.  I love this approach.  It makes me feel like I’ve bonded with all their employees, right after stepping through the entrance.


Carrie: That’s a great idea. Books bond strangers into friends quicker than just about anything, don’t they?

Davis: I travel a great deal, or at least I did before the covid lockdown.  (As I write this, England is about to enter its second hibernation.)  One of the big challenges I’ve faced as an author is learning not to be tied to a particular space.  Over the years I’ve developed what I call ‘triggers’, things that combine to separate me from wherever I am, and re-enter me into the world on the page.


Q: Did you have the whole plot outlined before you started writing Burden of Proof, or did you let the characters dictate what came next?


Davis: I do generally outline. But in Burden of Proof, I wrote the first sixty pages almost seven years ago, then set it aside. I felt like I had something big here, but it was missing a key element.  (See the next section for what that was.)  As soon as I discovered that, the entire story just fell into place.  Which meant rewriting almost every page I had done up to that point.  Bringing it all into alignment with where the people needed to go.


Q: What do you most want readers to take away from Burden of Proof?

Davis: Burden of Proof is a new take on the Prodigal Son.  In this case, the main character is presented with both a challenge and an opportunity – isn’t that so often the case?  He must confront what he has spent his entire life avoiding, in order to remake himself into the man he could always have been.  And do so before time runs out.


Carrie: That last sentence makes it even more intriguing!!

Davis: ‘The Cottage on Lighthouse Lane’, a story of redemption and healing, due out in time for next Easter.

Revell is offering a print copy of Burden of Proof to three of my winners! (US only. Void where prohibited by law or logistics.) This giveaway is subject to Reading Is My SuperPower’s giveaway policies which can be found here. Enter via the Rafflecopter form below.


What about you? What makes you want to read Burden of Proof by Davis Bunn?

31 responses to “Author Interview (and a Giveaway!): Davis Bunn & Burden of Proof”