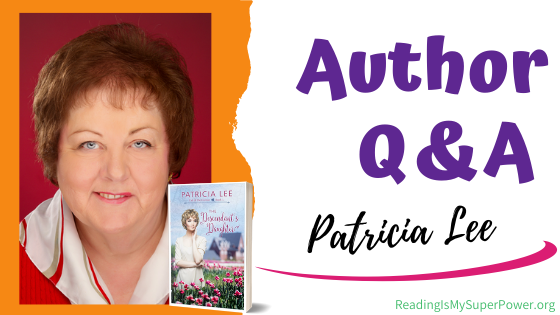 Please join me in welcoming Patricia Lee back to the blog – today she’s here to chat about her new split time novel The Descendant’s Daughter! 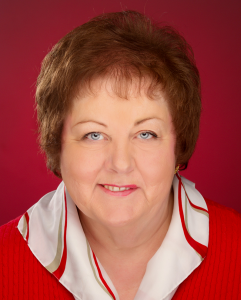 Patricia (Pat) Lee has had a fascination with words and what they can do since she wrote her first short paragraph at the age of six. She doesn’t remember the content of her story, but her teacher became excited at what she’d done. “Obviously,” Pat says, “words made people happy.”

Pat worked as a stringer for a local newspaper during her middle and high school years representing the school’s news to the community. She received her B.A. in Journalism from the University of Oregon, then went on to work as a tabloid newspaper editor at her local church.

After she married, she began her freelancing career and sold to various publications, including Expecting, Moody Monthly, and Power for Living. More recently she has published in two anthologies, Cup of Comfort Bible Promises and Heavenly Company, as well as featured articles in Focus on the Family’s Clubhouse magazine. An Anchor On Her Heart, her debut novel, released in July, 2017. Love Calls Her Home, the second in the Mended Hearts series, released March 1, 2018. The third novel, A Kite on the Wind released October 1, 2018.This summer, Love’s Autumn Harvest released July 11, 2020.

She lives with her husband and a handful of furry friends in the Pacific Northwest. They have two grown children. 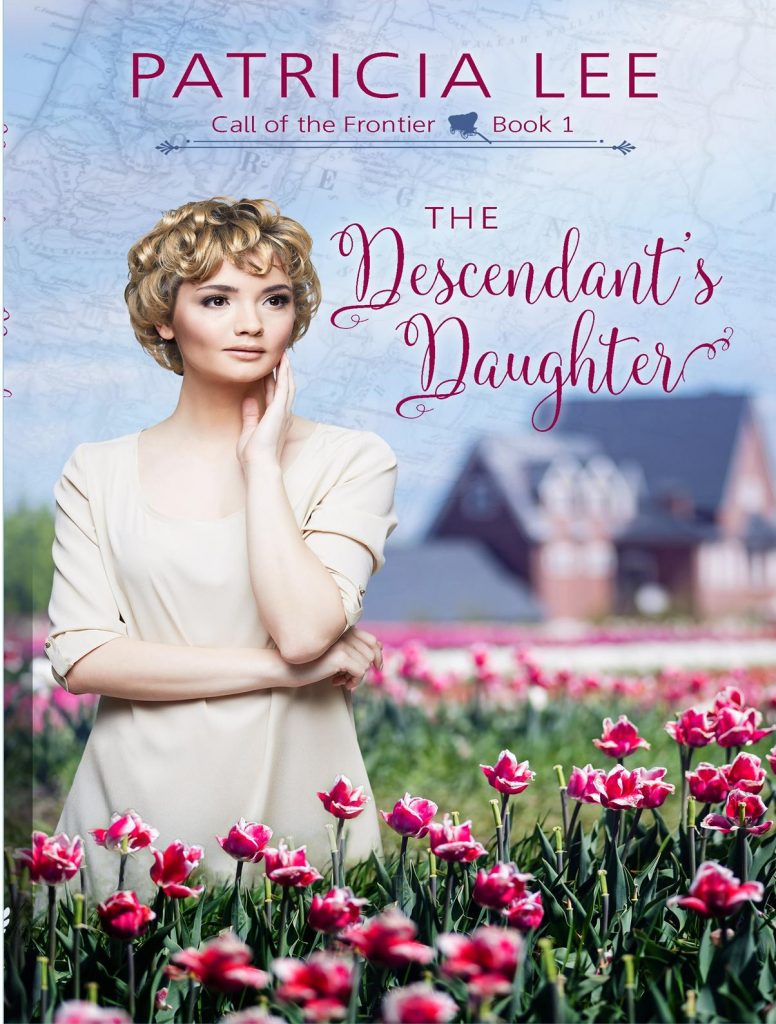 She loves her career. She shares an apartment with her best friend. She’s happy.

She has lived an idyllic life in San Francisco growing up as the only child of Maisie and Fred  Murphy. A graduate in architecture of the Art Institute, Halle works for one of the city’s historic home tours, a job that suits her.

But one Sunday while she’s working her mother slips at church and falls, the head injury claiming her life. At the memorial service the pastor presents an envelope of documents that he says will rock Halle’s world. Now officially an orphan, everything Halle believed about herself will soon prove to be false. Will she accept the challenge?

Garrett James has studied the life and adventures of his great-great-grandfather Cornelius Joel Hills, tracing his westward migration from Cortland, New York to Oregon’s Willamette Valley   in 1847. Garrett has searched for clues that will lead him to a lost bag of gold Cornelius buried but never reclaimed. Garrett believes the answers lie in the old family mansion no one seems to want. He decides to let himself into the house with a hammer and nails, only to discover the long lost owner has finally arrived.

Will this pixie of a girl allow him to look for answers or has he stumbled upon a greater treasure?

Hi Pat! Welcome back to the blog!

Patricia: I am not a winter person. I like to watch snow fall from the comfort of my window. Rain is nice to listen to, but keep me inside where I am warm and dry.

Summer, though, is an entirely different attitude. I love to grow flowers. My husband makes an annual trip to the garden outlet here and brings back half a yard of planting mix just for me. I fill pots to my heart’s content.  I used to grow about thirty varieties of dahlias but arthritic joints keep from spending that much time in the dahlia garden, so I grow the flowers in pots on the patio.  I’m especially fond of lantana, but bacopa, snapdragons, gabenzia, petunias, marigolds and calibrachoa also grace my pots.  Color is the key.

Carrie: I have yet to meet a flower I couldn’t kill…. though lantana lasted longer than most lol

Patricia: Hallmark channel has become a disappointment in recent months. I subscribe to Netflix and can usually find something that appeals to me. I’m picky about content and watch the ratings like a hawk. No R movies for me or questionable content.


Carrie: We are still Netflix holdouts – I keep thinking we will subscribe but then eh. I’d rather read or watch a Hallmark mystery lol

Patricia: Toilet paper goes over. If I forget and put it the other way my husband changes the roll.  Sometimes I put it under just to giggle when he has to change it.  He never disappoints and leaves it, either. Ornery is my middle name.

Patricia: Ocean and coastal beaches is my favorite place to visit. I can never get enough of the sea salty air or hear the cry of the gull too many times. As a family we camped at the coast when our children were young. Pitched a tent, cooked over a Coleman stove, lived out of a cooler. A lot of work, but so worth the effort. My main character has grown up in San Francisco and when she sees the forests surrounding her inheritance, she is enchanted.


Carrie: My ideal house would be one that looks out to the mountains from one side and the ocean from the other. I’m hoping my heavenly home will have that 🙂


Q: Around here I like to say that reading is my superpower. Last time you were here, you said your superpower is list making. Any updates?


Patricia: With the covid pandemic, list making has become more important than ever. My husband and I venture to the store only once a week so my list has to be complete when we go. I approach writing the list like a doctor writing care instructions. Can’t forget one ingredient or the meals I have planned are no more.


Carrie: so true! Definitely a year when a list making superpower comes in handy 🙂


Patricia: The pandemic has left me with a lot more reading time. Currently  I’ve been binge reading Lynn Austin’s books. Her WWII saga, If I Were You, was an engaging read about two women who were close friends, but through circumstances beyond their control wind up switching identities. When I finished reading this story, I wanted to follow the characters a while longer.  Maybe the author will write a second story. I can only hope.


Carrie: I have several of her characters across various books that I wasn’t quite ready to say goodbye to!

Patricia: I work at a desktop computer. I have a special table in the corner of a bedroom-turned-office where I work. A window above the table allows me to look out and watch the weather. A tree beyond the window provides the comical antics of birds and squirrels—spontaneous entertainment when I’m staring at a blank screen and my mind is just as blank.

Carrie: Sometimes it helps just to connect to the outside world a bit, even if we’re staying inside, doesn’t it? 🙂


Q: Which character was the most difficult to write in The Descendant’s Daughter?


Patricia: The most difficult character to write in this story was my great-great-grandmother. Very little material exists about her life before she traveled to Oregon. I had to study the area, the time, and use the things I did know about her to create the fictional being she became. I’m sure there are family members who will question the fictional character but that’s what makes writing fiction fun. Creating a persona from outlying circumstances.

Carrie: I love that the story is based off your own family history!


Q: What surprised you about the story or your characters as you wrote The Descendant’s Daughter?


Patricia: I’ve never written in first person point of view, but to separate the contemporary story from the historical timeline, I wrote the historical characters in first person as though they are speaking from a diary.  I was challenged because I often had to stop and work with the verb tenses to make the words sound correct.


Carrie: I really enjoy that technique as a reader but I imagine it would be challenging to write.


Q: What is something God taught you while you wrote The Descendant’s Daughter?

Patricia: Writing this book made me realize just how difficult the lives of pioneers who crossed the prairies were. To think my great-great-grandfather crossed the plains three times—twice on horseback and finally in a wagon—gave me a new appreciation for his life and his legacy.


Carrie: Their fortitude and determination is really very admirable!

Patricia: What’s next for me? A sequel to this book is in the works. I had to finish the prairie story so I continued with the time slip and the characters in a second saga. The new story will follow the crossing of the plains by the sister of my great-great-grandmother. And, of course, a new romance. 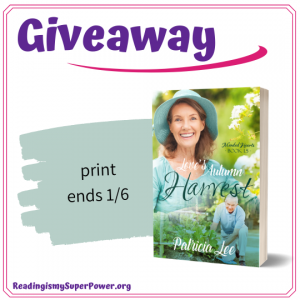 Patricia Lee is offering a print copy of her fourth novel, Love’s Autumn Harvest, to one of my readers! (US only. Void where prohibited by law or logistics.) This giveaway is subject to Reading Is My SuperPower’s giveaway policies which can be found here. Enter via the Rafflecopter form below.


What about you? What makes you want to read The Descendant’s Daughter by Patricia Lee? Do you have a family story that would make a great book?

31 responses to “Author Interview (and a Giveaway!): Patricia Lee & The Descendant’s Daughter”