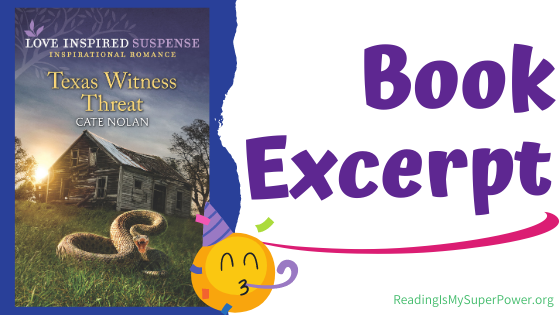 I’m so excited that Texas Witness Threat by Cate Nolan made the Publishers Weekly bestseller list, and I’m sharing an excerpt with you to celebrate!

She saw something she shouldn’t have…

Assistant US Attorney Christine Davis is positive she witnessed a murder, but with no body, the police aren’t convinced. Now someone wants her dead, and Texas Ranger Blake Larsen is the only one who believes her.

For Blake, protecting Christine must stay more important than their growing feelings for each other. But can he keep her safe from an unknown enemy who wants her silenced?

As Christine spoke, her confidence resurged. “I absolutely did not imagine any of this.”

She bit down on her lip, forced herself to relax. When she spoke, her words were calm but resolute. “There was a body. I’d stake my life on it.”

Blake didn’t say anything, so she continued on. “I hate this, you know. Hate having to prove I’m okay. Hate that people who should believe me don’t. I may suffer from anxiety attacks, but I’m not a quitter. And if they think they can scare me off, they’re dead wrong.”

Blake studied her for a long moment. “Okay.”

Christine waited as the silence stretched out. “That’s it?”

He shrugged. “I can grill you if you want, but I’m a pretty good judge of character, and I have no reason to doubt you.”

She scrunched up her face. “There is that little matter of the missing body.”

She laughed, and it sounded as freeing as it felt. She hadn’t realized until that moment how much she was relying on his offer of help or how much she feared he would withdraw it. “Please don’t tell me this happens all the time.”

Blake raised an eyebrow. “Probably more than you think. Historically, there are hundreds of convictions for murder with no body being found.”

Christine sagged back against the seat. “Those numbers should be reassuring, but they terrify me.”

“No one in law enforcement other than you and Dylan believes I witnessed a murder. That means no one but us is looking for a murderer.”

“But the murderers are still looking for me.”

Cate Nolan lives in New York City, but she escapes to the ocean any chance she gets. Cate loves to leave her real-life behind and play with the characters in her imagination. She’s got that suspense writer gene that sees danger and a story in everyday occurrences. She particularly loves to write stories of faith enabling ordinary people to overcome extraordinary danger.

check out my Q&A with Cate by clicking the graphic below! 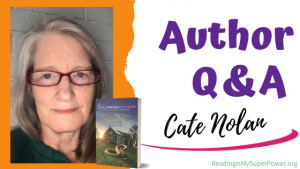 What about you? What makes you want to read Texas Witness Threat by Cate Nolan?