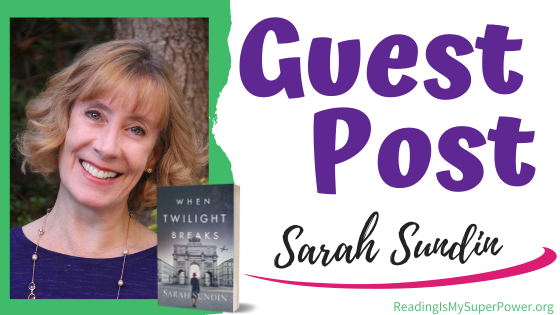 Hooray! The fabulous Sarah Sundin is here today to share what drew her to write about the WW2 era & what we can learn from it today. 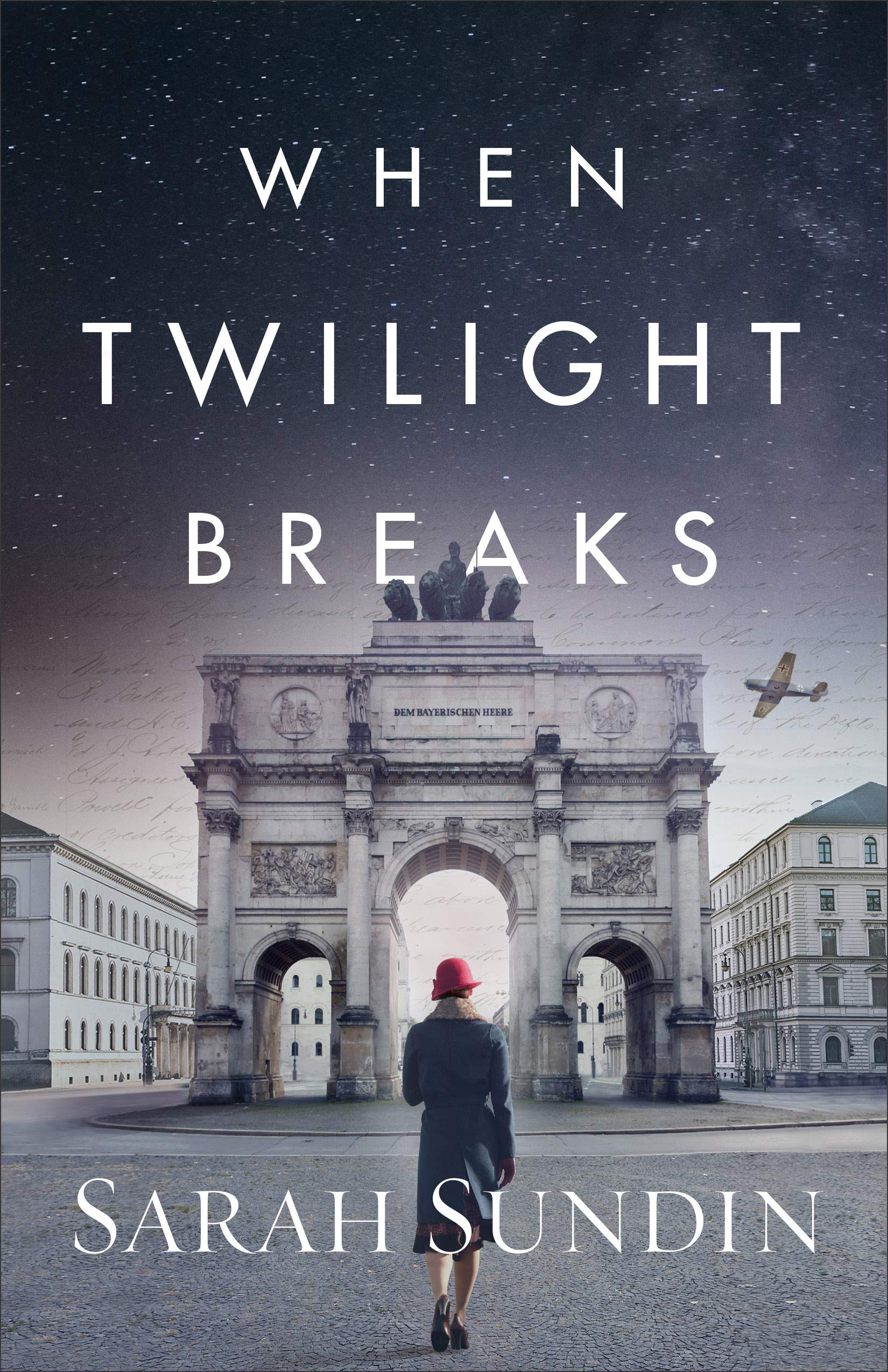 Evelyn Brand is an American foreign correspondent determined to prove her worth in a male-dominated profession and to expose the growing tyranny in Nazi Germany. To do so, she must walk a thin line. If she offends the government, she could be expelled from the country–or worse. If she does not report truthfully, she’ll betray the oppressed and fail to wake up the folks back home.

Peter Lang is an American graduate student working on his PhD in German. Disillusioned with the chaos in the world due to the Great Depression, he is impressed with the prosperity and order of German society. But when the brutality of the regime hits close, he discovers a far better way to use his contacts within the Nazi party–to feed information to the shrewd reporter he can’t get off his mind.

As the world marches relentlessly toward war, Evelyn and Peter are on a collision course with destiny.

“Once again Sarah Sundin takes readers straight into the heart of the conflict surrounding WW II. I loved the passionate characters in When Twilight Breaks, the unexpected turns, and the courage and love in the midst of a seemingly impossible situation.”–Melanie Dobson, award-winning author of Catching the Wind and Memories of Glass

“Genuine. Gripping. Gorgeous. With pitch-perfect details and her signature depth of historical accuracy, Sundin explores the overlapping boundaries of faith, truth, consequence, and love in a world drawn to the brink of WWII. Readers will be left spellbound!”–Kristy Cambron, bestselling author of The Paris Dressmaker and The Hidden Masterpiece series

what draws me to write & read about World war 2


by Sarah Sundin, author of When Twilight Breaks


Family stories originally drew me to the World War II era. My grandfather served in the US Navy as a pharmacist’s mate (medic) during the war, and his brother—my great-uncle—flew a B-17 bomber. They were both storytellers. My other grandfather was unable to serve due to a medical condition, but he used his skills as a German professor to train American soldiers in the German language and culture.

World War II is a fascinating era to write about, full of drama, daring, and romance, and my first twelve novels were all set during the war. For When Twilight Breaks, I actually scooted back in time to 1938, a year before the war began. The hero and heroine are Americans living in Nazi Germany—Evelyn Brand as a foreign correspondent and Peter Lang as a PhD student in German (loosely inspired by my grandfather’s career).

I think reading novels set during the war appeals to us because they show a time when America was united. Although there were hardships and dangers, almost everyone worked together to defeat a common enemy.

In the late 1930s, the situation couldn’t have been more different. The Great Depression had left over one-quarter of Americans out of work, with similar figures in most nations. Worldwide, there were civil wars, riots and unrest, and the twin dangers of communism and fascism. 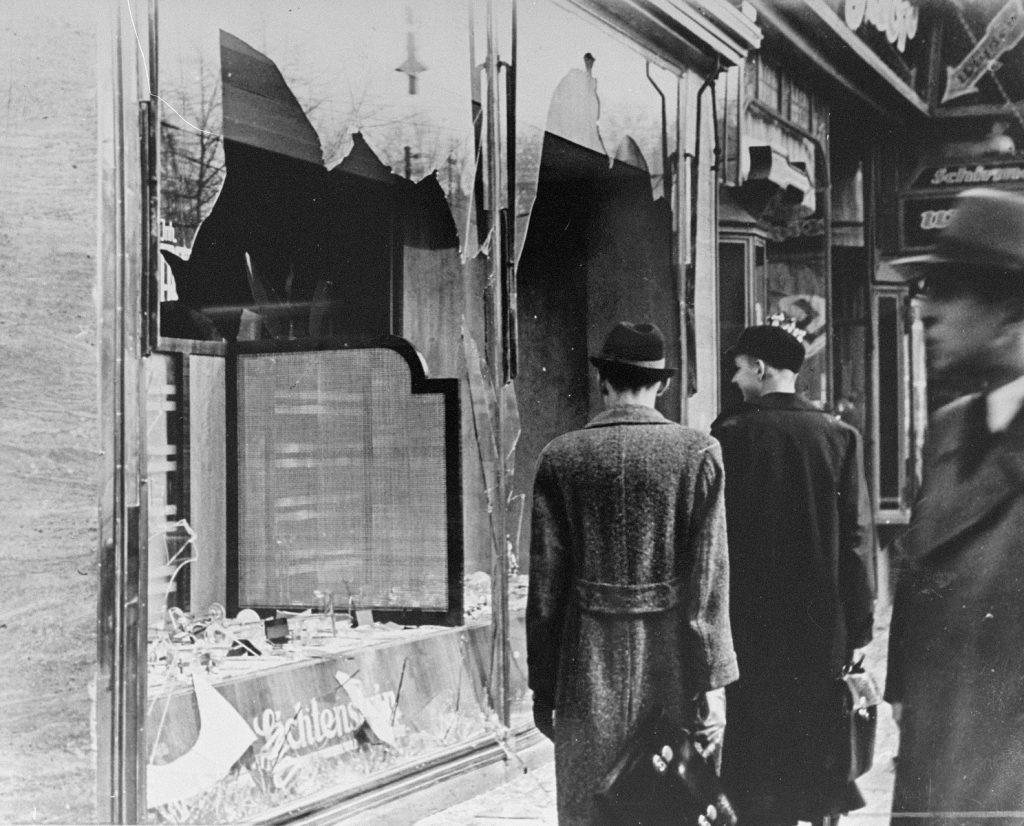 Looking back, it’s easy for us to see the seeds of the war and of the Holocaust in the 1930s. It wasn’t so easy to see at the time.

Writing a novel set in the turbulent year of 1938, the year of the Munich Conference and of Kristallnacht, was sobering for me. I saw so many trends that have resurfaced today. I kept grabbing my husband and saying, “Listen to this! It’s just like today!” I wanted to shout from the rooftops—but I’m not a shout-from-the-rooftops kind of woman.

Instead I wrote a story. A story with humor and romance and suspense and moments of terror. A story set in the beautiful city of Munich in the ugly year of 1938. A story where two people experience the events unfolding around them—and try to change them. And a story where people with views at polar extremes talk to each other, listen to each other, and humbly change their opinions.

I didn’t write this story to change minds, but to entertain and inspire. But if Peter and Evelyn’s story inspires even one person to think deeply about the events of history and of today, or to listen compassionately to someone with a different viewpoint, I will be thrilled. 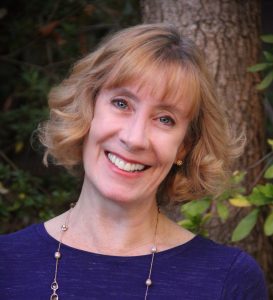 Sarah Sundin is a bestselling author of World War II novels, including When Twilight Breaks and the Sunrise at Normandy series. Her novel The Land Beneath Us was a 2020 Christy Award finalist, The Sky Above Us received the 2020 Carol Award, and The Sea Before Us received the 2019 Reader’s Choice Award from Faith, Hope, and Love. A mother of three adult children, Sarah lives in California and enjoys speaking for church, community, and writers’ groups. 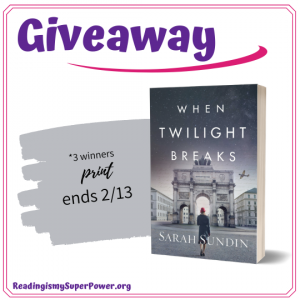 Revell is offering a print copy of When Twilight Breaks by Sarah Sundin to THREE of my readers! (US only. Void where prohibited by law or logistics.) This giveaway is subject to Reading Is My SuperPower’s giveaway policies which can be found here. Enter via the Rafflecopter form below.


What about you? What makes you want to read When Twilight Breaks by Sarah Sundin?

38 responses to “Guest Post (and a Giveaway!): Sarah Sundin & When Twilight Breaks”