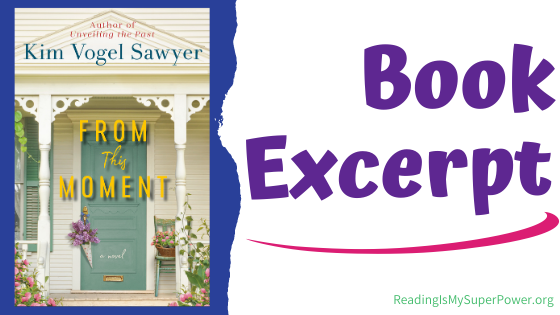 I’m delighted to bring you an excerpt from From This Moment by Kim Vogel Sawyer – her new cozy women’s fiction romance which releases today! 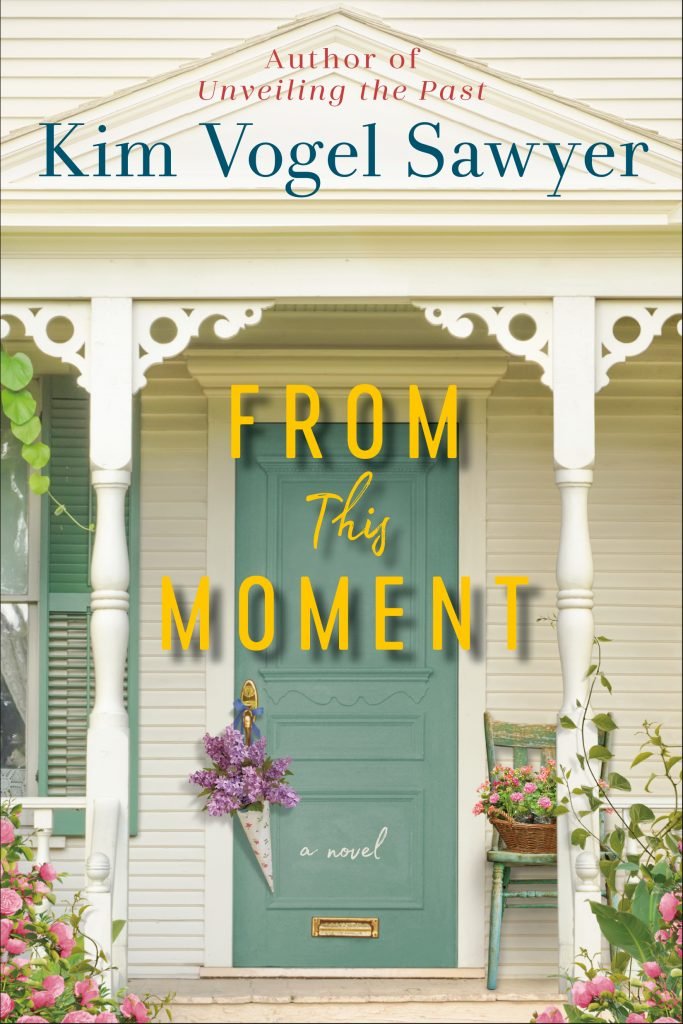 A lost ring brings together two wounded souls–a youth minister haunted by the past and a spunky church custodian–in this heartwarming romance from the bestselling author of The Librarian of Boone’s Hollow.

Growing up in the foster care system, Jase Edgar always dreamed of one day starting his own family. But his fiancé’s untimely death shattered his plans. Moving to Kansas and serving as a youth minister should be a fresh start, but he can’t seem to set aside his doubts about God’s goodness long enough to embrace his new life.

Newly-appointed church custodian, Lori Fowler is battling her own challenges. Her strained relationship with her father and her struggles with overeating convince her she’s not worthy enough for love. When an Amish weaver enlists their help locating the owner of a ring found among the donated clothing she uses as fabric, Jase and Lori find themselves drawn to each other. But will they be able to release the past and move forward from this moment into a joyful future?

“Set in contemporary small-town Kansas, the latest from Sawyer, following The Librarian from Boone’s Hollow (2019), is a refreshing story of supportive friendship and accountability…. Sawyer uses realistic characters and their flaws to illuminate the damaging effects of shame-based coping mechanisms while exploring themes of self-worth, discernment, and prayer in daily life and reflecting on the power of the past to define one’s future.

“Sawyer packs this entertaining tale with many twists and leaves the door open for more tales set in Bradleyville. The author’s fans will love this.”

Jase checked the GPS. Again. The thing showed he’d reached Bradleyville, but it had to be wrong. He scratched his stubbled cheek and frowned out the window. He’d left San Anto­nio for this? He must have lost his ever-lovin’ mind.

Thick, hairy grass—wheat, probably—grew on both sides of the road. A little gas station, its wood siding painted bright white with red trim, stood proudly near the two-lane road, but where was the town? There wasn’t a single other business in sight. Only a smattering of what appeared to be houses. They formed two un­even north-to-south rows about a quarter mile behind the station. If this was Bradleyville, he’d made a horrible mistake.

Why had he said goodbye to San Antonio, where he’d lived since he was fourteen? Goodbye to the folks at Grace Chapel, who’d welcomed him into their fold eighteen years ago? And goodbye to Rachel? A lump filled his throat, making it hard to take a breath. Saying goodbye to Rachel . . . that’d been hardest of all. How had he found the strength to turn his back on the love of his life?

He shook his head. He hadn’t turned his back on her. What had Brother Tony said? Jase closed his eyes and forced himself to recall every word the wise pastor had said to him during their final coun­seling session his last evening in San Antonio. “You’ll always carry her with you, Jase, but this fresh start means you’re trusting God with the next chapter of your life.”

The problem was, even after twelve months of coming to grips with the fact that she was gone, he didn’t want a new chapter. He wanted the one he and Rachel had scripted together. And taking the first step of his so-called new chapter on April first—April Fools’ Day—seemed especially inappropriate. He wondered, not for the first time, what God had been thinking to take her and leave him behind.

He scowled at the GPS. According to the lines on the screen, his new boss’s address—207 Bluebell Street—was a bit west and north of where he now sat in the idling U‑Haul. Gritting his teeth, he eased his foot off the brake and rolled forward on a potholed dirt road. He passed the gas station and came to an intersection marked by a handmade sign indicating Bluebell Street. He could only go right, so he made the turn and drove slowly, scanning both sides of the street while holding the U‑Haul to a crawl.

A street called Bush brought an end to the wheat field on the left and led to a block with two small houses separated by empty lots. More wheat on the right. Disbelief weighted his gut. How could they call this place a town? The next intersection was the first four-way intersection he’d encountered so far. A metal build­ing with a cupola filled a good chunk of land on the right. A por­table sign sat at the edge of the road. Black block letters spelled out Beech Street Bible Fellowship. So this was where he’d serve as a youth pastor.

He eased to a stop and craned his neck, giving the church a bet­ter examination. Now he could see there were actually two long metal buildings standing roughly twenty feet apart. The first one had the cupola, and the second sported a wooden cross nailed to its front. Some sort of enclosed breezeway, the peak of its roof barely reaching the eaves of the other two structures, connected the two halves. Although there wasn’t an official steeple or any stained-glass windows, the buildings and the yard all looked clean and well cared for. Not fancy. Not by any stretch of the imagina­tion. Not even churchy. But homey somehow.

Shifting his focus forward again, he spotted a two-story home with a trio of carriage-type garage doors on its lower level. The front of a ranch-style house stuck out from the far side of the ga­rage. Its paint colors—cream with dark green trim—matched the garage. No other house sat on the right-hand side of Bluebell Street, so it had to be where the pastor lived. Jase pulled in a breath and blew it out, then drove the remaining distance, the growl of the U‑Haul’s tires loud on the gravel road.

He parked in front of the house and turned off the engine. He hadn’t even climbed out of the cab before the front door of the house opened and a smiling couple stepped out onto the porch. The woman stopped at the edge of the concrete slab, but the man—short, heavyset, with gray-streaked hair and a huge grin—ambled down the steps and came toward Jase, his hand extended.

Jase met him in front of the U‑Haul. The man’s handshake, strong yet not crushing, sent a message of welcome. Jase felt his lips curve into a smile. “Hello. I’m Jase Edgar. You must be Rever­end Kraft.”

“I am. But call me Brother Kraft. Everyone around here does.” The man beamed at Jase, his blue eyes narrowing to merry slits. “I’m sure glad to meet you. And you’re right on time for lunch. We were sitting down when Leah heard your truck. She said it had to be our new youth minister.” He chuckled and leaned forward slightly, like a child sharing a secret. “She made extra in the hopes you’d be here in time to eat with us.”

Jase glanced at the woman. She waited with her hands tucked in the pockets of a yellow-flowered bib apron, her gaze seemingly glued to him. He gave a nod, and she bobbed her head. He turned to Brother Kraft again. “That’s awfully nice of her.”

“Well, Leah loves to cook. Doesn’t need much of an excuse to fix plenty, either. So come in, come in.”

Brother Kraft slung his arm up and across Jase’s shoulders and herded him along the paved sidewalk to the house. The warmth of the man’s arm felt good. Although Jase wouldn’t call the tempera­ture in this part of Kansas cold, it was definitely too cool for the T‑shirt, cargo shorts, and sandals he’d put on that morning. The weather here was at least ten degrees lower than a typical April day in San Antonio.

Mrs. Kraft, equal in height to her husband but half his girth, pulled her hands out of her pockets and grabbed Jase in a tight hug the moment he stepped up onto the porch. It reminded him of the hugs given by some of the older ladies at the church back home, and he automatically returned it with matching oomph. She pat­ted his back several times, then let go and grinned at him. “Jase Edgar, welcome to Bradleyville. My brother-in-law spoke so highly of you, I know you’ll be a blessing in these parts. But instead of standing out here talking, let’s get sat down at the table before the meatloaf and mashed potatoes are cold. I hope you’re hungry.”

Jase’s mouth watered. “I am, and that sounds good, ma’am.”

“Call me Sister Kraft.” The preacher’s wife slipped her hand through the bend of Jase’s elbow and gave him a little nudge into the house. “We’ll get good and acquainted while we’re eating, and then we’ll help you settle in to your new home.”

New home. A boulder seemed to drop into Jase’s stomach. They were kind words. Welcoming words. Shouldn’t they inspire some­thing other than panic?

Excerpted from From This Moment. Copyright © 2021 by Kim Vogel Sawyer.
Used by permission of WaterBrook, an imprint of Penguin Random House LLC. 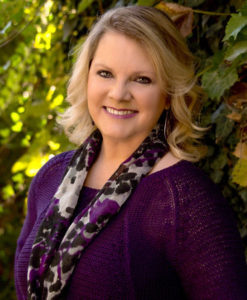 KIM VOGEL SAWYER is an award-winning, bestselling author with more than 1.5 million books in print in seven different languages. Her titles have earned numerous accolades, including the ACFW Carol Award, the Inspirational Readers Choice Award, and the Gayle Wilson Award of Excellence. Kim and her retired military husband, Don, live in in central Kansas, where she continues to write gentle stories of hope. When she isn’t writing, Sawyer stays active serving in her church, traveling, and spoiling her grandchildren. For more information, visit www.kimvogelsawyer.com.

WaterBrook is offering a print copy of From This Moment by Kim Vogel Sawyer to THREE of my readers! (US only. Void where prohibited by law or logistics.) This giveaway is subject to Reading Is My SuperPower’s giveaway policies which can be found here. Enter via the Rafflecopter form below.


What about you? What makes you want to read From This Moment by Kim Vogel Sawyer?

37 responses to “Book Spotlight (and a Giveaway!): From This Moment by Kim Vogel Sawyer”