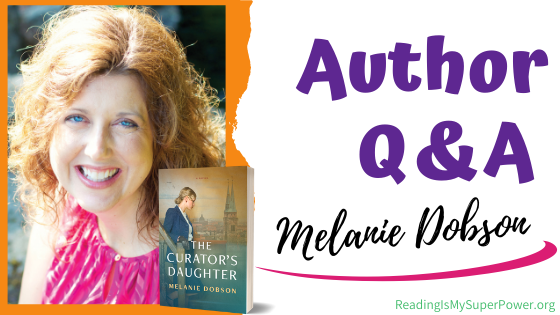 Always an honor to chat with author Melanie Dobson – she’s one of my very fave authors – and I’m super excited to host her today as it’s release day for her newest dual timeline (historical/contemporary) novel The Curator’s Daughter! 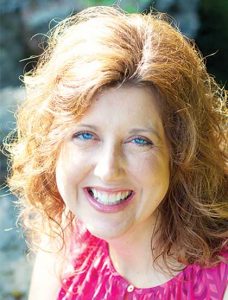 Melanie Dobson is the award-winning author of more than twenty historical romance, suspense, and time-slip novels. Five of her novels have won Carol Awards; Catching the Wind was nominated for a Christy Award in the historical fiction category and won an Audie Award in the inspirational fiction category; and The Black Cloister won the Foreword magazine Religious Fiction Book of the Year. Melanie is the former corporate publicity manager at Focus on the Family and owner of the publicity firm Dobson Media Group. When she isn’t writing, Melanie enjoys teaching both writing and public relations classes. Melanie and her husband, Jon, have two daughters and live near Portland, Oregon 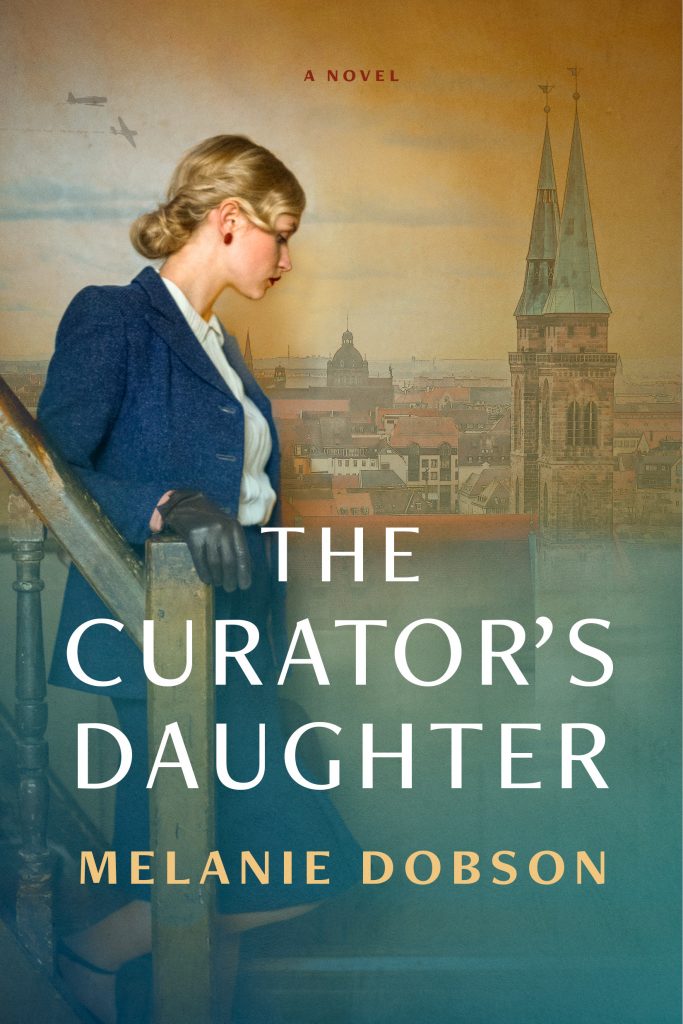 A young girl, kidnapped on the eve of World War II, changes the lives of a German archaeologist forced into the Nazi Party and–decades later–a researcher trying to overcome her own trauma.

1940. Hanna Tillich cherishes her work as an archaeologist for the Third Reich, searching for the Holy Grail and other artifacts to bolster evidence of a master Aryan race. But when she is reassigned to work as a museum curator in Nuremberg, then forced to marry an SS officer and adopt a young girl, Hanna begins to see behind the Nazi facade. A prayer labyrinth becomes a storehouse for Hanna’s secrets, but as she comes to love Lilly as her own daughter, she fears that what she’s hiding–and what she begins to uncover–could put them both in mortal danger.

Eighty years later, Ember Ellis is a Holocaust researcher intent on confronting hatred toward the Jewish people and other minorities. She reconnects with a former teacher on Martha’s Vineyard after she learns that Mrs. Kiehl’s mother once worked with the Nazi Ahnenerbe. And yet, Mrs. Kiehl describes her mother as “a friend to the Jewish people.” Wondering how both could be true, Ember helps Mrs. Kiehl regain her fractured childhood memories of World War II while at the same time confronting the heartache of her own secret past–and the person who wants to silence Ember forever.

Hi Melanie! Welcome back to the blog! I’m always honored to have you here! Thank you so much for chatting with me 🙂


Melanie: Thanks for having me, Carrie! I love reading your blog and am honored to be your guest again.

Q: How did you become a writer?


Melanie: I think I was born with a book in one hand and a pen in the other! I loved stories as a child and began journaling my own story when I was seven. Then I discovered the magic of creating my own characters and plots. With degrees in communication and journalism, I worked in public relations for many years, but I kept returning to my dream of writing fiction. In 2006, after seven years of hard work and dozens of rejections, my first novel was published.

Carrie: As a reader who adores your books, I’m so glad you persevered! 🙂


Q: What made you want to write historical fiction? What about this genre do you most enjoy?


Melanie: I’m the reader who wants an epilogue in every historical novel, so the time-slip genre with both a historical and a contemporary plot is the perfect fit. I love learning from history, and with time-slip, I can write about how something that happened in the past continues to impact people today. How even with the hardest of circumstances, the greatest of heartaches, redemption can still happen years later. As a result, I hope readers are able to embrace hope for their own story.


Q: What are some good books you’ve read lately?


Melanie: I recently read Set the Stars Alight (Amanda Dykes) and The Fifth Avenue Story Society (Rachel Hauck). I LOVED both of these stories!

Q: What inspired the storyline and characters found in The Curator’s Daughter?


Melanie: The Curator’s Daughter was inspired by a reader friend. As I researched her story and the Nuremberg trials, I struggled to understand why Germans in this medieval city and across the country didn’t stop the Holocaust. Then I began to realize that a battle had waged within Germany between wars. The people were struggling to find their identity, trying to determine who they were after the loss of the Great War. The Nazis used and abused this desire and began manipulating citizens through pride, fear, shame, and other psychological tactics. The Nazi leaders targeted youth first, presenting Hitler as a father when many fathers were missing. They compiled an archaeological team to dig for artifacts to prove their Aryan heritage and created stories—propaganda—to further their work because they knew the power of story. Then they created an alleged threat—a common enemy—to unleash the pent-up anger.

As I read about the Nazis’ quest for power, I began to wonder what would happen to a professional woman in this era who was passionate about history and its stories. A loyal German citizen who began to question the motivation and control of her government and decided to collect and then hide the stories of those who were being sent away.


Q: Tell us about some of the core themes of The Curator’s Daughter. How do you hope these themes will resonate with and challenge your readers?


Melanie: The importance of learning from history, the importance of remembering, is one of the main themes in The Curator’s Daughter. There are Jewish memory books from the thirteenth century, namestones, memorial stones from the book of Joshua, and German stumbling stones—all physical items set in place so future generations won’t forget.

Another major theme in this story is forgiveness. Both my past and present heroines struggle to forgive husbands who abused them, and they visit an old labyrinth above Nuremberg to pray and then lay down their burdens, their wounds, at the place where a cross once stood.

I hope readers will be inspired to break free of any bitterness and find ways to remember the miracles in their story to pass down as a legacy to the next generation.

Carrie: I love these themes! All so important…


Q: How is the perspective of The Curator’s Daughter unique compared to other novels in the WWII genre?


Melanie: This novel steps right into the heart of Germany before and then during World War II. The Jewish people were repeatedly welcomed and then expelled from Nuremberg for more than five hundred years, and this story explores—through the perspective of a female archaeologist and wife of an SS officer—why many Germans didn’t try to stop this abuse. The Curator’s Daughter demonstrates this pattern of persecution through stories from earlier centuries and remembers the heroes who stood up against evil. Each character must ultimately choose whether to embrace an identity cultivated not from circumstances or their family but from knowing that they are a son or daughter of God.

Carrie: One of the things I’m most thankful for about God is that He always provides remnants – true heroes – to stand up against evil. ♥


Q: What was one of the most surprising things you discovered in your research for this novel?


Melanie: When I began writing this novel, I knew the Nazis stole artwork and other artifacts from Eastern Europe, but I had no idea they also kidnapped Jewish children to be raised as “racially pure” Germans. The Nazis had begun losing many of their countrymen in the war so they took it upon themselves to measure these children for what they considered defects and “aryanize” those who they thought would help build a new German culture and loyal army. Some accounts say that more than 200,000 children were kidnapped from countries like Poland, Czechoslovakia, and Yugoslavia. Many of these kids were too young to remember their biological families, and some didn’t find out for decades that they weren’t really German.


Carrie: oh. my. goodness. Wow! I did not know that either…


Q: How did you get the idea for the connection between your two main characters, Hanna and Ember?


Melanie: The connection between Hanna and Ember slowly developed as I realized that Ember would be a Holocaust researcher, inspired by the stories of her former teacher on Martha’s Vineyard, and the victim of a modern-day cult. As she delves deeper into her teacher’s past, she discovers Hanna’s story, and this story ultimately changes her life. As a time-slip writer, it’s rewarding for me to weave the stories of past and present characters together as I discover the connections between them. I won’t give away all the threads, of course, but the similarities in what Hanna faced in the 1940s and what Ember continues to face today surprised me.


Carrie: I always love discovering those connections between the characters as I read your books 🙂

Q: What is one of your favorite quotes from The Curator’s Daughter & why do you love it??

Melanie: Words will never penetrate a hardened heart….The persecution won’t end until people are willing to humble themselves and love their neighbors.

I wrote The Curator’s Daughter in 2019, a time-slip story about a female German archaeologist who was being sucked into the lies and deception of the Nazi party. Obviously I had no idea what was to come in our world, but some of the plotlines in this story include a pandemic from the Middle Ages, the loss of free speech, and a raucous mob in Washington D.C. These lines above are about the cycle of hatred in our world and the quest of two women to stop it.

Melanie:I’m currently writing a time-slip novel inspired by another true story, this one about a young Quaker woman who helped Jewish children escape over the French Pyrenees near the end of World War II. This next book will take readers on a harrowing escape in Southern France and then over the ocean to a beautiful, remote farm in Oregon with a caretaker who has harbored a terrible secret for more than fifty years. 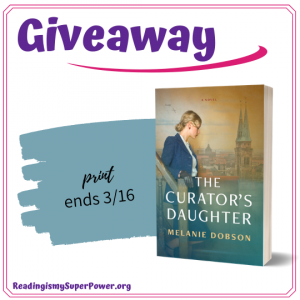 Tyndale House is offering a print copy of The Curator’s Daughter to one of my readers! (Domestic US only. Void where prohibited by law or logistics.) This giveaway is subject to Reading Is My SuperPower’s giveaway policies which can be found here. Enter via the Rafflecopter form below.


What about you? What makes you want to read The Curator’s Daughter by Melanie Dobson?

45 responses to “Author Interview (and a Giveaway!): Melanie Dobson & The Curator’s Daughter” 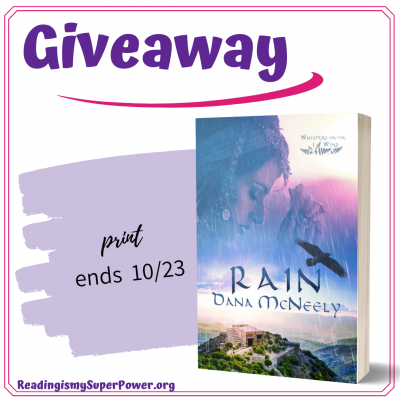