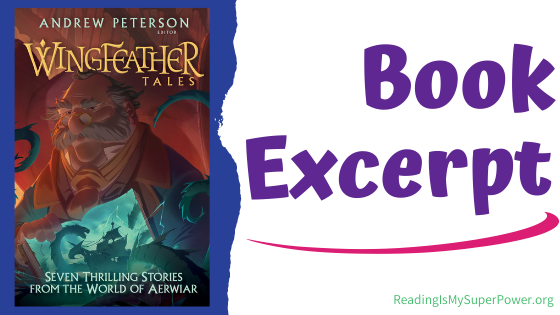 I’m delighted today to give you a peek inside Wingfeather Tales by Andrew Peterson & other authors & illustrators – and a chance for three of you to win a copy of your own! 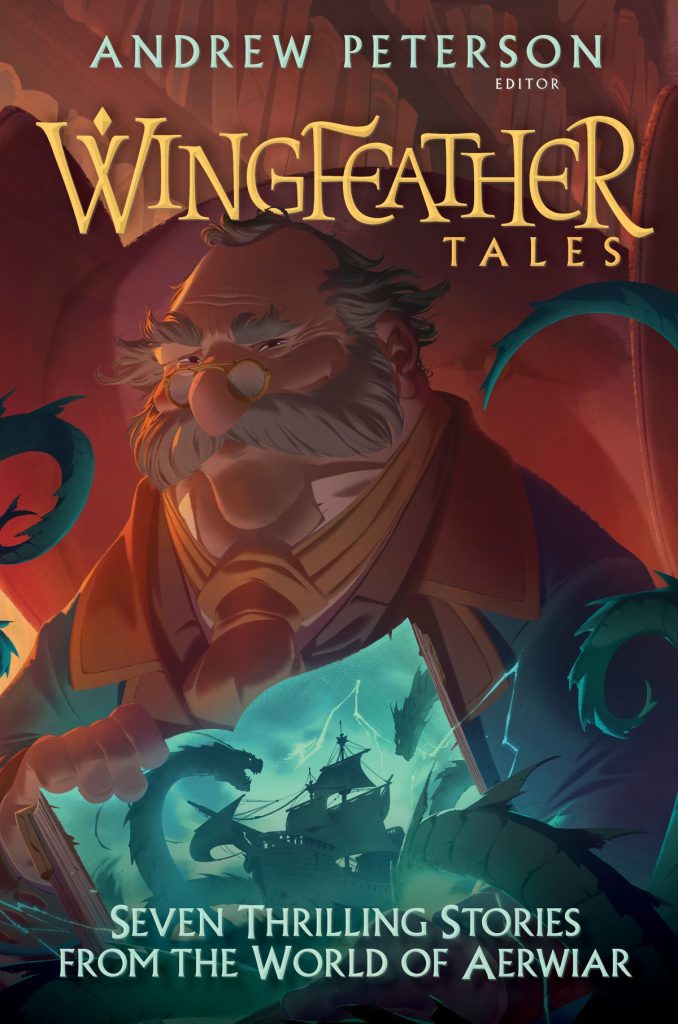 Return to the world of the Wingfeather Saga with Andrew Peterson and his all-star author friends—now featuring new illustrations and the first-ever Wingfeather comic!

Immerse yourself in a land of bomnubbles and quarreling cousins, sea dragons and book publishers, thieves and Fangs and secret maps. Here within these pages lie seven stories of the distant past, lost adventures, forgotten songs, and heartbreaking histories. The Shining Isle is restored, but Aerwiar is vast—and these authors have tales yet to tell:

•  Explore the inner walls of Yorsha Doon, just West of the Woes of Shreve, on the edge of the Dark Sea of Darkness, from the eyes of young Safiki in “The Prince of Yorsha Doon” from the creator of Aewiar, Andrew Peterson.
•  Jennifer Trafton’s warm and whimsical writing brings to life a publishing nightmare populated by the many beasts of Skree in “The Wooing of Sophelia Stupe.”
•  Learn the origins of Ollister Pebmrick’s mysterious entry in the Creaturepedia about his encounter with a raggant in “Willow Worlds” by N. D. Wilson.
•  Travel with young Podo Helmer on an epic hunt for sea dragons in “From the Deeps of the Dragon King” from A. S. Peterson.
•  Jonathan Rogers presents “The Ballard of Lanric and Rube,” sung by Armulyn the Bard, tale-spinner of the imaginary Shining Isle of Anniera, in On the Edge of the Dark Sea of Darkness.
•  Discover what life was like for Maraly and Gammon in post-war Skree in “Shadowblade and the Florid Sword”—the first-ever Wingfeather comic—by Andrew Peterson.
•  Douglas McKelvey’s epic, heartbreakingly hopeful novella “The Places Beyond the Maps” recounts a father’s journey to redemption.

from The Prince of Yorsha Doon
Written by Andrew Peterson

He wandered along streets he didn’t know, though he wasn’t far from the district where his grandmother had raised him. Every turn brought more of the same, yet everything was different, like new verses to an old song. Ancient buildings that he could tell by the rugged stone at the foun­dations were as old as the city itself; newer buildings that stood as many as eight stories tall, made of stone so smooth and polished he could see his moonlit reflection when he passed; shacks built of driftwood and the planks of decommissioned ships. The carvings of stone faces, worn smooth and nearly featureless by hundreds of years of sandstorms, grimaced or grinned or looked on stoically from archways and pillars. Rope bridges spanned the high windows where laundry swayed in the night breeze. After a while he came upon an empty square with a round stone well pool at the center and realized he was terribly thirsty.

Safiki stopped at the edge of the square and listened. Where there was water, there were usually people, and where there were people, there was dan­ger. When he heard nothing, Safiki crept as silent as the moon to the pool, sat on the edge, and dipped his hands into the cool water. He drank with his eyes wide open, scanning the four corners of the square for movement.

He didn’t think to look in the water itself.

A hand shot out and pulled him under. Safiki struggled, and though the assailant’s hands weren’t strong, they were quick enough to keep him busy. He sputtered and gasped and kicked until he was free, then jumped out of the pool and backed away, shaking the water from his eyes. All he saw was a shadow—a small shape, dripping and motionless, hiding under a ledge formed by the flat rim of the pool. Safiki knew better than to investigate. He turned to run.

“Wait!” the shadow said in a loud whisper.

Safiki took a few steps and stopped. “What do you want?”

“The palace guard. And worse.”

Safiki heard movement to the north and saw the glow of torchlight down one of the streets. It was getting brighter. Then he heard footsteps. He spun around and saw that down two of the other streets more torchlight approached. He thought about sprinting for the other street, the only dark one, but he doubted he would cross the open square before the nearest of the guard—or worse, whatever that meant—emerged. It didn’t matter that he wasn’t the one they were hunting. He would be chased, perhaps caught and interrogated—and likely thrown into a workhouse with the rest of the orphans too slow to survive on the streets. Safiki knew exactly how to hide in a crowd, but now he felt exposed, so he slipped into the pool as quietly as he could and pressed himself against the side, his face just above the water, hoping he was as invisible as the well’s other occupant had been.

“My name is Saana,” the shadow whispered.

“I escaped the palace.”

Safiki forgot he was hiding and whispered, too loudly, “The palace?” He had never spoken to anyone who had seen the inside. “What’s in there? Is it as lovely as they say?”

“Yes. Well, it used to be. Before Roduin came.”

“Keep your voice down!” Saana whispered.

It sounded as if the guards were in the square now, searching the perim­eter. Torchlight illuminated the faces of the buildings, but the girl was still just a vague shadow on the opposite side of the pool. “Listen. I need to tell you this now, in case they catch me. A year ago, Roduin and his mercenaries found a way into the palace and captured Prince Majah.”

“For the treasure. Roduin’s hoarding it in one of his bloodrock mines somewhere in the Woes. The prince and his whole court have been in the dungeon ever since. My father is the kitchener, which is the only reason we’re not in the dungeon too. Our family prepares the food.”

“But what about all the palace guards? I see them on the wall every day.”

“The real guards are in the dungeons. The prince’s personal guard was killed. I’m telling you, the palace is overrun with Roduin’s men. And his Fangs.”

Safiki’s stared at her. “You’re lying.”

Safiki couldn’t see her face, but he could feel her eyes. The guards were getting closer.

This, Safiki thought, is why I like to be alone. As soon as you know some­one’s name, things get complicated.

Excerpted from Wingfeather Tales: Seven Thrilling Stories from the World of Aerwiar. Copyright © 2021 by Andrew Peterson. Used by permission of WaterBrook, an imprint of Penguin Random House LLC. 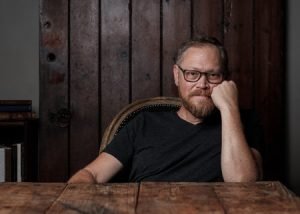 Andrew Peterson is critically acclaimed in the music industry, and his lyrics and songwriting are compared by reviewers to James Taylor, Marc Cohn, and the late Rich Mullins. He’s married to Jamie; they have two sons, Aedan and Jesse, and one daughter, Skye. 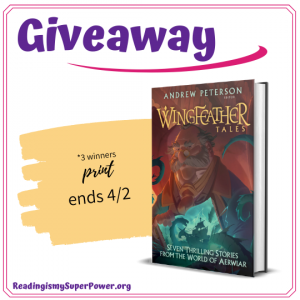 WaterBrook is offering a print copy of Wingfeather Tales by Andrew Peterson to THREE of my readers! (US only. Void where prohibited by law or logistics.) This giveaway is subject to Reading Is My SuperPower’s giveaway policies which can be found here. Enter via the Rafflecopter form below.


What about you? What makes you want to read Wingfeather Tales by Andrew Peterson & friends? Which young reader in your life would you like to read it with?

8 responses to “Book Spotlight (and a Giveaway!): Wingfeather Tales by Andrew Peterson”