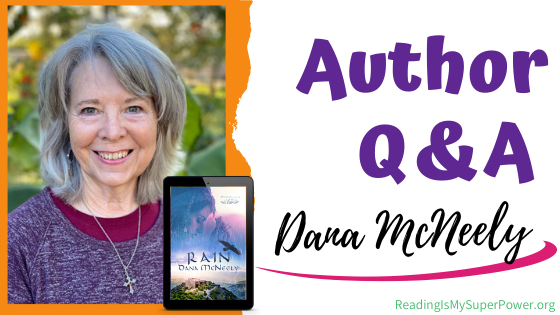 Please join me in welcoming Dana McNeely to the blog today to chat about her debut novel, Rain! 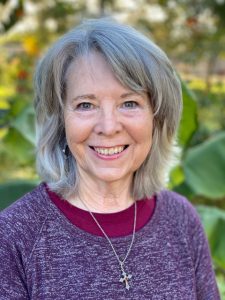 Dana McNeely dreamed of living in a world teeming with adventure, danger, and romance, but she had a problem—she also needed a lot of peace and quiet. She learned to visit that dream world by stepping into a book. Soon, she began writing her own stories, fact and fiction. Inspired by the Bible stories of Elijah, Dana wondered why the prophet came to stay with the widow of Zarephath and her son. Who were the pair? What was their life before? How did the boy change after he died, saw the other world—and came back?

Those questions led to Dana writing RAIN, in which she built her dream world of adventure, danger, and romance. Peace and quiet, however, have remained elusive. No stranger to drought, Dana lives in an Arizona oasis with her hubby the constant gardener, two good dogs, an antisocial cat, and migrating butterflies.

Her novel RAIN spins the tale of a mysterious prophet, a desperate youth, and a relentless queen during Israel’s great drought.

RAIN is available from Mountain Brook Ink, wherever books are sold. A prequel novelette, THE EYES OF THE LORD, is FREE at https://DanaMcNeely.com. 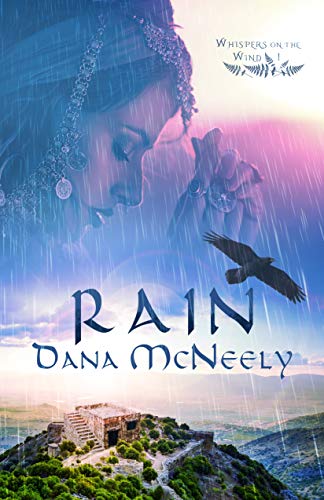 He is destined to be high priest—but at what cost to those he loves?​

In ancient Samaria, Aban anticipates his rites of passage with excitement and dread. He yearns to join the priesthood of Ba’al Melqart, unlock the power of the rain god, and hear the deity’s voice. He’s been warned the licentious ceremony can take a dangerous turn, but as eldest son of the high priestess, he holds a privileged position. If he can make it through the ceremony, one day he’ll rise to high priest.

On the eve of the rituals, Aban’s mother confesses a dark secret about the bloody sacrifice demanded by Melqart. Aban may have escaped the flames, but if he is to save his brother, Aban must take his destined position of power as soon as possible.

When the mysterious prophet Elijah interrupts the rites, overturns the idol, and curses the land with drought, Aban’s world is shaken. The current high priest and the king appear powerless, but even more confusing is the fact that the rain god does nothing.

Against his better judgment, Aban conceals the strange prophet’s whereabouts, forfeiting the high priesthood. Now an enemy of the relentless Queen Jezebel, Aban has little time to question his fading commitment to Ba’al Melqart as he and his loved ones flee. But the conflict in Samaria is much larger than just a high priestess and her sons. Soon, Aban will have to choose a side in Yahweh’s war against the Ba’als—and it may cost him his life.

Hi Dana! Welcome to the blog!

Dana: I have two good dogs and an anti-social cat, so a month ago I would have grinned and said, “Both.” However, in the middle of the night a few weeks back, my cat bit my hand which was lying atop the covers. I can only assume this was her way of saying, “I’ve decided you can pet me now. WAKE UP! (Crunch.)” After a three-day stay in the hospital fighting infection and issues which drag on, my current answer is “Dogs!”

Dana: It’s best not to talk to me before coffee. Not because I’m especially cranky, but because I’m not quite “switched on.”

Carrie: lol i’m the same way with my Diet Coke 🙂

Dana: I discovered the beauty of audiobooks when I commuted three or four hours to work each day. Now I listen while I walk. I get more steps this way and it’s pure guilt-free, healthy bliss!


Carrie: My husband loves audiobooks too but i just can’t get into them. I wish I could, though!

Dana: Yes! I love hiking mountain trails, relaxing on a shaded porch in a swing or rocker, and listening to the sound of wind in the trees. On the other hand, staring into the far-off horizon, hearing waves crash, smelling the distinctive salty-breeziness that defines the seashore, and feeling sand beneath my toes all remind me of the immensity of God’s creation. I refuse to choose between ocean and mountains. 🙂

Carrie: I’m not a fan of hiking, but otherwise I fully embrace this answer 🙂

Dana: Helping is my superpower. Encouraging others to try, to continue, or to believe recharges me. You’ll rarely find me volunteering to lead, but I’m often willing to come alongside.


Dana: The Egyptian Princess: A Story of Hagar, by K.D. Holmberg. Denise, my friend and co-Biblical Fiction author at Mountain Brook Ink, pens a riveting and well-researched account of Hagar… before and after.

For the Love of Emma, by Starr Ayers. Also a Mountain Brook Ink friend and author, Starr shares a moving, personal story set in World War I.

This Time Next Year We’ll be Laughing, by Jacqueline Winspear. I’ve enjoyed several of Winspear’s historical mysteries. The early pages of this peek into her own history held me captive.

Twelve Extraordinary Women, by John MacArthur. I have a short story in mind for Christmas and want this outstanding scholar’s take on Anna.

One Faithful Life: A Harmony of the Life and Writings of the Apostle Paul, also by John MacArthur.  In two or three years, I’d like to write a New Testament series starting with the encounter between Stephen and Saul of Tarsus.


Carrie: I’ve had my eye on some Winspear books for a while now – i’ll have to make sure I prioritize one of her books!


Dana: I’ve googled “Sheriff Joe’s program to rehabilitate dogs and criminals” and “Poisonous plants which kill,” both weird, but used in short stories, so they don’t count. When digging into the backstory for RAIN, I googled “signs and symptoms of dementia.” Although this information didn’t make its way into my novel, it did inform a prequel novella, THE EYES OF THE LORD, in which the heroine’s father exhibits early signs of the disease. His odd behavior leads to the “meet cute.” THE EYES OF THE LORD is free to all newsletter subscribers at https://bit.ly/T-updates.

Carrie: I hadn’t thought of dementia being around in the Biblical era but I suppose it was! That’s really interesting to think about in that context.


Q: Which of your main characters in Rain is most like you?


Dana: Aban, a young acolyte of the god Melqart, yearns to know the deepest truths about the deity he will serve when he takes his place as high priest. Aban’s quest is sidetracked when the prophet Elijah storms into the temple and curses the land with drought. I relate to Aban’s lifechanging search to delve into the truth – Melqart or Yahweh?

Carrie: It definitely is a lifechanging – and so worth it – search for Truth


Q: Which character in Rain was the most difficult to write?


Dana: Jezebel, a priestess of Astarte, princess of Tyre, and queen of Israel, has been hated throughout history. I had to let go of that one-sided image to find the personality that became Jezebel in my story. Intently focused on making her gods primary in Israel, she must have had a powerful and (in her mind) sympathetic backstory. I found her backstory in the land of Tyre, where she sat at her father’s knee and learned how to rule.


Q: What is one of your favorite quotes from Rain & why do you love it?

Dana: One of the surprising incidents in the life of Elijah was when he fled from Jezebel. She was powerful, relentless, and evil, but Elijah had just called down fire and rain from the skies. Why should he fear her? Here’s a quote from the chapters in which I explore this question.

“[Elijah had] been running for three days and nights in fear for his life. Now he wearied of it. But, no, he realized he was wrong. He wasn’t in fear of his life. He was in fear that his life had meant nothing.”


Carrie: I love that insight! We’ve just finished a sermon series about Elijah at church and I love what his story can teach us about ourselves.

Miriam travels from Samaria to nearby Jezreel to assist her cousin’s wife during her upcoming childbirth. Miriam’s parents hope she’ll also find a husband in Jezreel, but all she wants is to explore the countryside with her cousin’s young and energetic son. But when enemy forces swarm the land on their way to Samaria, Miriam and her cousin’s family are trapped together inside Jezreel, with no idea how long the danger will last.

In Samaria, Dov has been promoted to leader of archers in King Ahab’s army. When the Arameans and their allies surround the capitol with an army many times the size of Samaria’s, Ahab capitulates to their demands. This doesn’t appease the enemy, who immediately increase their demands. But then a prophet, wearing a disguise, brings a shocking message. Mount an attack immediately, led by the junior officers, and Yahweh will give you the victory. Who is this prophet? Is it prophet Elijah? If not, can he be trusted? 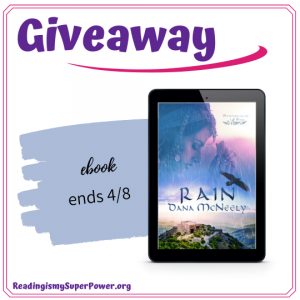 Mountain Brook Ink is offering an ebook copy of Rain by Dana McNeely to one of my readers! (Void where prohibited by law or logistics.) This giveaway is subject to Reading Is My SuperPower’s giveaway policies which can be found here. Enter via the Rafflecopter form below.


What about you? What makes you want to read Rain by Dana McNeely?

8 responses to “Author Interview (and a Giveaway!): Dana McNeely & Rain”