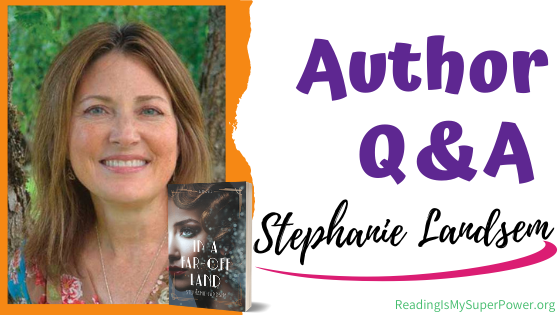 Please join me in welcoming author Stephanie Landsem to the blog today to chat about her new historical novel, In A Far-Off Land! 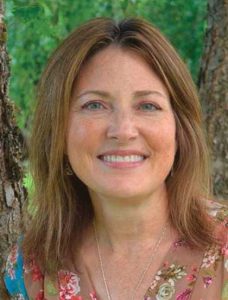 Stephanie Landsem writes historical fiction because she loves adventure in far-off times and places. In real life, she’s traveled on four continents and met fascinating characters who sometimes find their way into her fiction. Stephanie is just as happy at home in Minnesota with her husband of thirty years, occasional adult children, two cats, and a dog. When she’s not reading, researching, or writing, she’s avoiding housework and dreaming about her next adventure—whether it be in person or on the page. 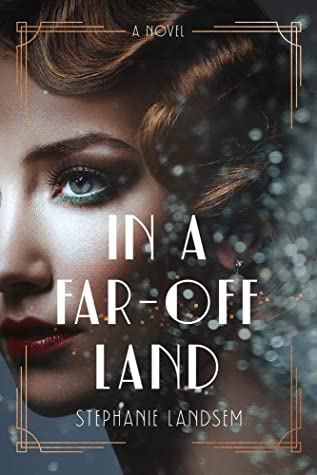 
A story about the price of fame, the truth sacrificed on its altar, and the love that brings a prodigal daughter home.

As the Great Depression hits the Midwest, Minerva Sinclaire runs away to Hollywood, determined to make it big and save the family farm. But beauty and moxie don’t pay the bills in Tinseltown, and she’s caught in a downward spiral of poverty, desperation, and compromise. Finally, she’s about to sign with a major studio and make up for it all. Instead, she wakes up next to a dead film star and is on the run for a murder she didn’t commit.

Only two unwilling men—Oscar, a Mexican gardener in danger of deportation, and Max, a too-handsome agent battling his own demons—can help Mina escape corrupt police on the take and the studio big shots trying to frame her. But even her quick thinking and grit can’t protect her from herself. Alone, penniless, and carrying a shameful secret, Mina faces the consequences of the heartbreaking choices that brought her to ruin . . . and just might bring her back to where she belongs.

Hi Stephanie! Welcome to the blog!

Q: First, can you tell us a little about your writing habits and how you get inspired?


Stephanie: I’m most often inspired by women’s stories of strength and transformation in the face of difficulties—and there are plenty of those kinds of stories in all historical time periods. A little research is all it takes to get the idea for a story and start asking the building-block question of any good novel: What if? After that, it’s more research, plotting, and writing. I’m a very slow writer so that part takes the longest. Then there’s revising, input from writing friends, and of course a good editor because commas are my downfall!


Q: What drew you to write about the Great Depression era for In a Far-Off Land?


Stephanie: The era of the Great Depression was one of enormous change in the United States. Women’s roles were changing rapidly, and Prohibition was having dramatic effects on crime and law enforcement. Nationalism and communism were becoming powerful motivators in the political realm at a time when we were experiencing heightened racial tensions and prejudices in city and rural areas. Then the economy went into a tailspin that added strain to every family in the country. Despite all these difficulties, what we hear from many of our parents and grandparents who lived through this time are stories of resilience, heroism, and family togetherness. I’ve always been interested in this juxtaposition and hoped to write a story that showed the many facets of this time period in our country.


Carrie: I have been too – for those exact reasons – so I’m really looking forward to reading your new book!


Q: How did you go about researching the world of Hollywood in the 1930s?


Stephanie: Researching the 1930s was a delight and very different from my previous historical research in biblical times. I found fascinating firsthand accounts of everything from taxi-dancing to farm life, glamorous photos of movie stars, and of course the films of the times—from my favorite, Charlie Chaplin, to early works of Myrna Loy and Clara Bow. The original sources on 1930s Hollywood were abundant and easily accessed, which made deciding when to stop researching and write the story in my head the most difficult part of this book!

Carrie: i bet that was difficult!


Q: The main character of In a Far-Off Land struggles with shame and regret. Did writing a character like that grow your sympathy for real people in similar situations?


Stephanie: Falling, repenting, and being welcomed back to the Father is the story of humanity from Adam and Eve to our present day. And most importantly, it is the story of God’s great mercy. In Mina’s story, I hoped to show how a son or daughter of God can go down into the depths of sin but never—never!—be out of reach of the Father’s immense love and forgiveness.

Carrie: I’m sure there were – and still are – countless young men & women who have experienced this rollercoaster of fame & shame at the hands of Hollywood So sad… but thankful for our Father who freely offers grace when we come back home.

Q: Along those lines, what was it like to write the father of your main character—the father watching his child make mistakes and hoping she will eventually come home?

Stephanie: As parents, we live with the hope that our children will be happy, never suffer, never fail. But they do, of course, because they are human and we are all weak and stumbling our way through life. It was a great joy to write Ephraim’s story as he waited in faithful patience for the return of his wayward daughter, and then offered her mercy and forgiveness—and great joy!—just as our Father offers the same to each of us every single time we come back to Him. No matter what.


Q: Can you tell us about some lesser-known historical events that made it into In a Far-Off Land?


Stephanie: I loved learning about farm life in the Depression—bank foreclosures, penny auctions, and how farmers made ends meet when money was tight. Researching the sad reality of Mexican Repatriation in Los Angeles and around the country was eye-opening and brought to light a chapter in our country’s history that is sometimes forgotten, and unfortunately has been repeated. Of course, the ins and outs of Hollywood were fascinating—the rise of the studio system, the power wielded by a very few, and the hopeful masses that flocked to California, hoping to be discovered.


Carrie: such a fascinating time in US History – the good, the bad and the ugly of it.


Q: How can stories of struggle in past eras inspire us when we face difficult times?

Stephanie: Many struggles that we face now seem brand-new to us, but in reality almost everything has been faced by humankind in some way before: economic crisis, war, poverty, disease, and prejudice have been on earth since biblical times. I think that is why Jesus used parables to teach his followers, because they can be translated across the ages into the real truths that can see us through our current problems and point us in the direction we need to go.


Carrie: Yes! I love how Jesus put such importance on stories to convey truth. Because, like you said, they stand the test of time and are relevant to us just as much as they were to people in the past.

Q: Why do we love stories of leaving home to go to a “far-off land”?

Stephanie: All good stories are about change and transformation. And what is a more dramatic way to transform than to leave all we know and strike out to a far-off land, to test our self-reliance and our limits? But what we find in leaving-home stories—from Grimm’s fairy tales to The Hobbit to The Wizard of Oz—is that even as we go far from home, we take our old selves with us. It is only when we let ourselves change from within that we can be transformed in a real and meaningful way and then—sometimes—discover that all we ever wanted is waiting for us back home where we started.

Q: What is your hope for readers of In a Far-Off Land?

Stephanie: My wish for all my historical fiction is that readers may come—through the magic of storytelling—to understand more about themselves. People of long-ago times and far-off places are not so different from us. We all have hopes and fears. We love and are loved. We have parents and children and siblings and friends. We make mistakes and ask forgiveness. Sometimes we are weak, and sometimes we are heroic, and always we learn and grow. I can’t claim to use stories as effectively as Jesus did in his parables, but I hope in my small way to show the truths of this life—and the next—in the characters and happenings of my stories.

Tyndale House is offering a print copy of In a Far-Off Land to one of my readers! (US only. Void where prohibited by law or logistics. This giveaway is subject to Reading Is My SuperPower’s giveaway policies which can be found here. Enter via the Rafflecopter form below.


What about you? What makes you want to read In a Far-Off Land by Stephanie Landsem?

10 responses to “Author Interview (and a Giveaway!): Stephanie Landsem & In a Far-Off Land”