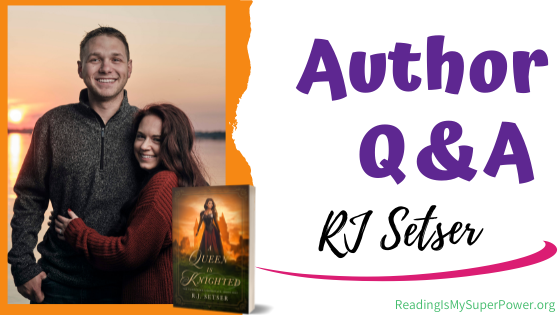 Please join me in welcoming the author team of RJ Setser to the blog today to talk about their debut YA Fantasy novel, A Queen is Knighted! 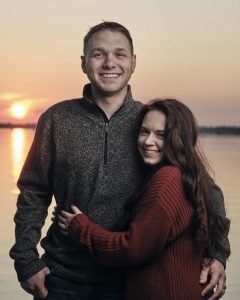 R.J. Setser is a pseudonym for wife and husband duo, Rayleigh and Joshua Setser. High-school sweethearts who found their happily-ever-after in 2019, Rayleigh and Joshua have been writing together since 2015 and finished their debut novel, A Queen is Knighted in 2020. They live in a small town in Texas with their 2 dogs, Watson and Rosie, and 1 cat, Yuna. They spend most of their time juggling Joshua’s military life and Rayleigh’s civilian life. In their free time, they can be found with both of their families at the lake, reading or writing, and quite possibly playing sword-fighting video games “for research”. Find them on Instagram @r_j_setser or online at rjsetser.com. 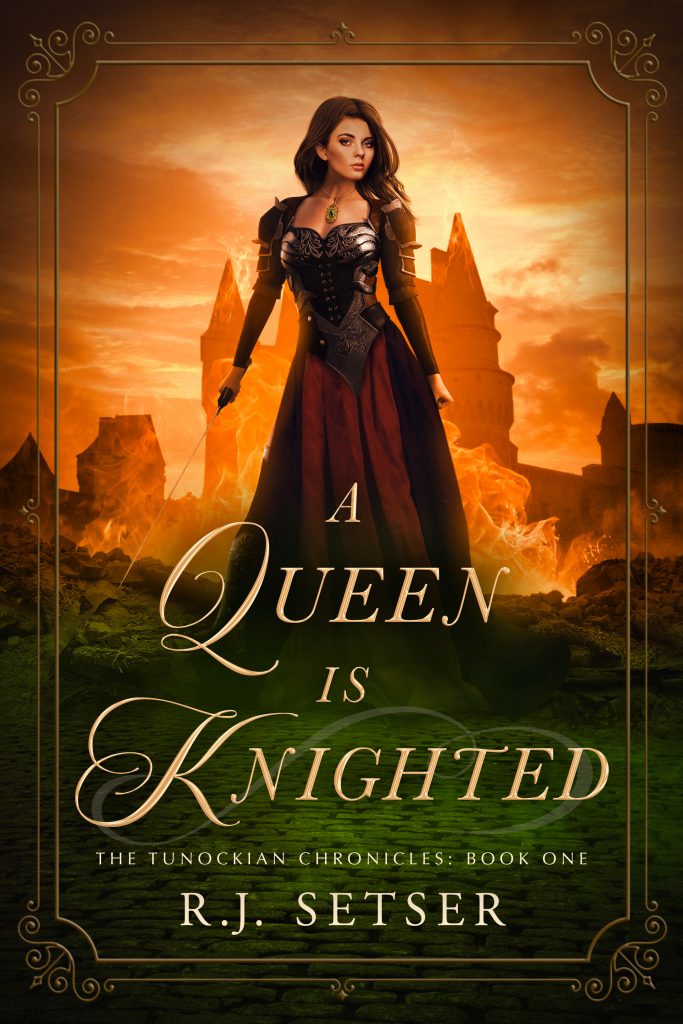 Three Kingdoms. Two wars. And one queen who is desperate to save them all.

The kingdoms of Tunock, Taus, and Wilmington have been at peace for more than five hundred years. On their secluded peninsula, life is perfect for royalty and commoners alike. Fear of the pirates in the waters keep them from exploring further than the beaches, and tales of strange visions and missing persons keep them from going to the mountains Beyond. They are happy with their way of living and content in knowing that as long as they don’t cross the borders; they are safe. But everything changes when the castle of Tunock burns to the ground and the royal family disappears with no one to blame.

Princess Lauraine of Tunock never dreamed that she would spend her seventeenth birthday escaping a burning castle, but that’s precisely how she spent it. Left to the mercy of a knight whom she’s never met before, Princess Lauraine goes into hiding while trying to solve the political mystery of who attacked her home—and why. She befriends an old knight—whom her father declared insane—and though she trusts her father’s declaration as much as she trusts him, something about the old man seems sincere. Could her father have been wrong about him? And when strange things happen throughout the kingdoms—things that should only belong in the fairy tale books—Lauraine finds herself at an impasse: should she rise to the position of Queen and restore order to her kingdom; or risk losing her kingdom entirely in search of the truth?

As the events happening in the Three Kingdoms continue to unwind, Princess Lauraine makes a choice. A choice that promises little reward and far more humiliation if she’s wrong. With a small band of friends who she deems trustworthy, Lauraine gives her everything to become the person who will save her kingdom—even if it means losing herself.

Hi RJ! Welcome to the blog!

RJ: Certainly summer! Both mine and my husband’s family own lake property, so sunsets over the lake and weekends spent on the boat have been, and will always be, my happy place!

Carrie: Even though I prefer winter, that does sound like a lot of fun 🙂

RJ: Dogs! The longest I’ve ever lived without a dog best-friend was 3 months during college, and I remedied that with my lab mix, Watson, very quickly. My husband and I also rescued Rosie, a border collie, and then later a pitch black cat (Yuna) who loves to antagonize them both.


Carrie: aww i love dogs! And the cat who antagonizes them is good for their character LOL

RJ: Coke is a lifestyle! Not only is it a preferred drink, but I have quite a collection of Coke merchandise including shirts, antique signs, coke bottle decor in my house, and even an abnormally large 4 foot tall coke bottle. My husband’s groom’s cake at our wedding was Coke themed as well. We may have a problem…


Carrie: that is awesome! You would feel right at home here with us too. So if there IS a problem, let’s just both stay blissfully unaware 🙂

RJ: Probably board game. My husband and I play card games a lot as well, but whenever we go shopping for a new game, we usually lean towards the board game sections.


Carrie: ok seriously you need to come hang out with us 😀

RJ: Honestly, I wish I could clone myself sometimes. I do think that would do both me–and the world–a LOT of good because everything would always be done on time!


RJ: Since I’ve been in the third trimester of my pregnancy, I’ve had an abnormal amount of time to read lately. Some books worthy of noting during the past month would be On These Black Sands by Vanessa Rasanen (YA Pirate Fantasy), Come Back to Me by Jody Hedlund (Christian Time-Travel/Historic Romance), and The Secret of Pembrooke Park by Julie Klassen (Christian Historical Romance). My top book of the year though is without a doubt Dearest Josephine by Caroline George–believe me, it is absolutely flawless!


Carrie: The Secret of Pembrooke Park is one of my fave Julie Klassen books!


RJ: I believe the answer would depend entirely on who you asked (yes, some would say that I play favorites)! My main characters likely hate me, because I seem to always save the brutality for them and them alone, while background and other “allies” typically get the sweeter ends of the deal in the story. So they may or may not be correct when they say that I have favorites *wink*.


Q: Were there any songs that inspired you as you wrote A Queen is Knighted?


RJ: There were a lot of songs that inspired me as I {and my husband} wrote A Queen is Knighted! But one in particular really stood out to me and helped me fully grasp the struggles that I was trying to pen for my main character. It’s called Breathe by David Archuleta and it’s truly a beautiful song that helped me portray Queen Lauraine’s vulnerabilities.

Carrie: that IS a beautiful song


Q: Some authors like to hide little things in their stories. Is there anything you have hidden in A Queen is Knighted?


RJ: Absolutely! The soundtrack of Spirit: Stallion of the Cimarron is my anthem when I write almost anything because it is my absolutely favorite movie, so in A Queen is Knighted, there are several nods and “easter eggs” hidden throughout the story that point to Spirit. Two of them being a chapter titled “Rain” and the horse that Queen Lauraine rides is loosely inspired by Spirit.

RJ: “For the first time in her life, she felt as if she wasn’t just a girl in a castle. An annoyance to her family. Or a princess to be wasted away. She was a part of something big. Something that she hoped that she would live through to tell the story of one day.” – A Queen is Knighted

I love this quote because I think it encompasses a lot of the inner turmoil that many of the characters face throughout the book. The feeling to DO something that MEANS something. And I think a lot of readers can relate to that inner desire of purpose.

Carrie: I love that!!

RJ: Up next for Joshua and I is book two to The Tunockian Chronicles. Even though book one, A Queen is Knighted, has been out for scarcely a [month], we’ve already outlined book two and are preparing the stage to dive back into the world with Queen Lauraine and her party!

Don’t forget to comment on this post & enter my monthly giveaway for a book of your choice from my stash! After you’ve commented, claim your entry HERE.

What about you? What makes you want to read A Queen is Knighted by RJ Setser?

12 responses to “Author Interview: RJ Setser & A Queen is Knighted”