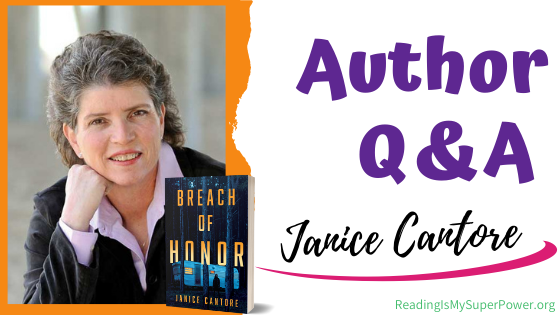 Please join me in welcoming Janice Cantore, one of my fave suspense authors, to the blog today to chat about her new novel, Breach of Honor! 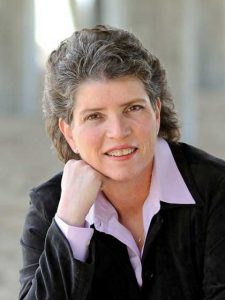 Janice Cantore is a retired Long Beach police officer who now writes suspense novels to keep readers engrossed and leave them inspired. Her twenty-two years of experience on the force lend authenticity to her stories. She has penned twelve novels: the Line of Duty series, the Cold Case Justice series, the Pacific Coast Justice series, Critical Pursuit, Visible Threat, and Breach of Honor. 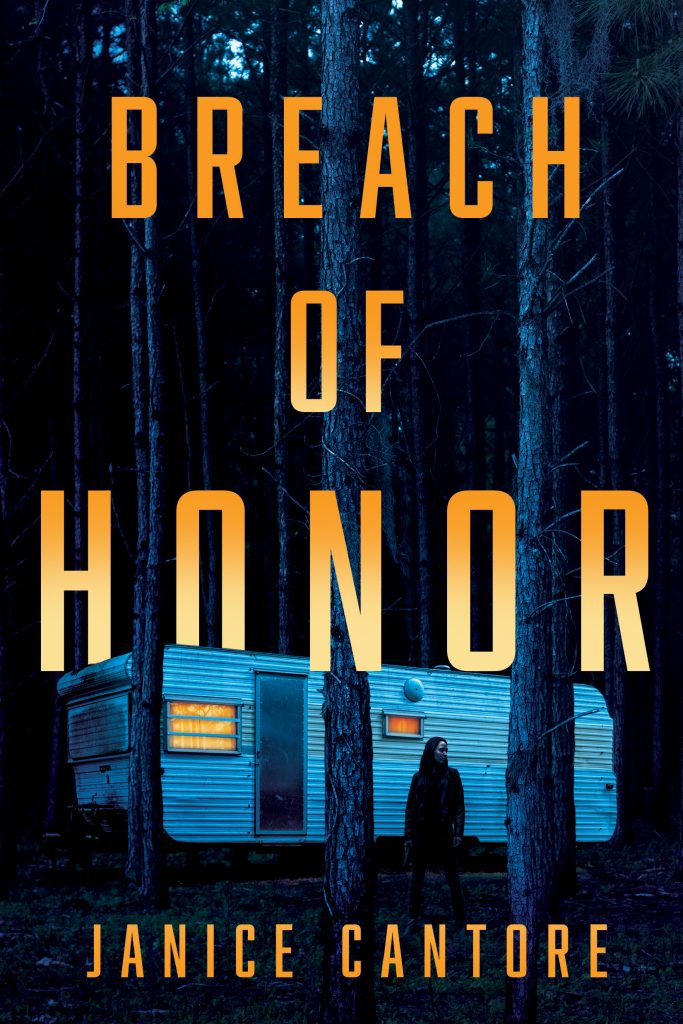 As a police officer in Table Rock, Oregon, Leah Radcliff puts her life on the line to help others every day. But at home, Leah’s battling her own personal nightmare: Brad, her abusive husband, a fellow officer, celebrated hero, and beloved son of a powerful prominent family. Brad’s violent outbursts and suspicious activities have left Leah physically and emotionally scarred, until one desperate action to put a stop to his abuse results in deadly consequences.

Though public opinion seems ready to convict Leah, Officer Clint Tanner is one of the few to believe she acted in self-defense. As he works with Leah’s attorney to produce the evidence they need, new truths about Brad’s dark side come to light—and reveal a deep-rooted problem in Table Rock. There are some who have breached their sworn duty to serve and protect . . . and they’ll do anything to keep their secret safe.

Hi Janice! Welcome back to the blog!

Q: What inspired you to start writing novels based on your experience as a police officer?


Janice: I’ve always loved mystery/suspense novels. A cop as the main character was always a plus. Joseph Wambaugh was kind of the gold standard for cop novels in the 80s, but as good as his books were, they were too hard-bitten and at points a bit depressing. I always liked the good guys winning, and I wanted the endings of my stories to uplift and not depress. Reading Randy Alcorn’s Deadline showed me that the Christian message had a place in suspense fiction. As a Christian, I recognize the importance of faith in fact and fiction. Everyone struggles with something. In my novels there is always a faith journey, the end of which falls in line with what the Bible promises. It’s my way of getting faith messages out to people who might never pick up a Bible.


Q: What do you enjoy most about being an author?


Janice: That I can work where I want. That means in general and on a day-to-day basis. I can work in my office or in a coffee shop. And I can live in Hawaii; I love that!


Carrie: oh man! how do you get anything done with all that gorgeous scenery right there?!?


Q: Breach of Honor delves into serious, complicated issues like domestic abuse, wrongful prison sentences, and the obstruction of justice. Can you share some of the real-life experience and research that went into crafting the plot of this novel?


Janice: When I first started working as a police officer, domestic violence was a frustrating call to go on. In the late 80s and early 90s, if the abused party did not want to prosecute, there was nothing we could do. Sometimes, to try and defuse the issue, we would arrest the aggressor knowing they would be released the next day if the abused party dropped charges. A lot of women felt trapped; the man was often the breadwinner, and they knew that if he went to jail, they would be on the streets, so they put up with abuse. And if the man was the one being abused, there was shame involved; he would not admit being abused.

Thankfully, the law changed. Sometime in the mid 90s it became possible for the state to be the victim. We could take the primary aggressor to jail whether the abused party wanted the person arrested or not. This took emotion out of it; the concern was making certain that the abuse stopped and the victim was protected. Shelters sprang up for victims, and more resources became available. There was also a lot more education available for first responders to help recognize all forms of abuse, to better equip them to help victims. In the past, women stayed in abusive relationships because they felt there was no way out. Now, there is a lot more help available for women to get out and for abusers to be prosecuted.

As far as people wrongfully convicted of crimes, it’s difficult to find a hard answer to that. Estimates range from 2.3 percent to 6 percent of all convictions. There is no way to know for certain. The use of DNA has been a big help in that area. The sad fact is, when it is proven that someone was wrongfully convicted, it’s generally because of government misconduct. As far as Brad and Leah, their story was drawn by me just asking what-if questions over and over. Sadly, it’s plausible something like that could happen.


Carrie: Thankful for the progress that’s been made, and continuing to pray for more!


Q: What lessons does Breach of Honor teach about justice, community, and accountability within government organizations?


Janice: Everyone needs to be held accountable. Accountability keeps everyone honest. It is true that evil only progresses if left unchecked.


Q: What role does faith play in this story?


Janice: Ultimately, the story is Leah’s faith journey. She ran away from God when she married Brad. But God never moved. He never lets believers run far. Coming back to faith sustained Leah when she was sent to prison. She realized early on that she would not survive her sentence with nothing to look forward to. Her father’s message that he would always pray for her reignited a faith she’d been running away from.


Carrie: He never wastes anything we go through, does He? ♥


Q: What was your favorite thing about crafting the romance plot in Breach of Honor?


Janice: I liked the idea that Clint liked Leah from afar. He prayed for her and stuck by her when things looked bad. Also, he saw and recognized what happened to her. Though she was charged with a horrific crime, he never lost faith that eventually she would be vindicated.


Carrie: That patient, steady love is such a tender picture of grace!


Q: How do you expect Breach of Honor to resonate with your readers?


Janice: In bringing attention to domestic abuse, I hope readers will recognize that it can happen to anyone. The abused are never at fault. I would hope that anyone in an abusive relationship would get out. I hope they would realize that there are resources available to them. But they need to ask for help.


Carrie: So true… there but for the grace of God go any of us.


Q: What are you most excited for your readers to experience through reading this novel?


Janice: Leah’s rebirth, her rededication to her faith. God is in everything in this life, the good and the bad. For the believer, He works ALL things out for good.


Thank you so much for taking time to talk with me! 🙂 Before we say goodbye for today, tell us what‘s coming up next for you, now that you’re releasing Breach of Honor!


Janice: My work in progress has a working title of Saving Grace. It’s the story of Danni Grace, an officer who is injured during a riot and struggles with the idea of working for a public that seemingly hates her. She is trained to help in emergencies and used to running toward danger instead of away from it. Would she really be happy leaving law enforcement for something else? 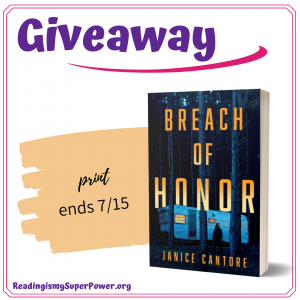 Tyndale House is offering a print copy of Breach of Honor by Janice Cantore to one of my readers. (US only. Void where prohibited by law or logistics.) This giveaway is subject to Reading Is My SuperPower’s giveaway policies which can be found here. Enter via the Rafflecopter form below.


What about you? What makes you want to read Breach of Honor by Janice Cantore?

28 responses to “Author Interview (and a Giveaway!): Janice Cantore & Breach of Honor”