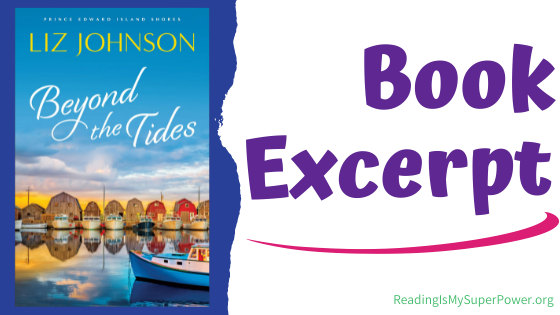 I’m delighted to give you a peek inside Beyond the Tides by Liz Johnson with an excerpt – and a chance for three of you to win a copy of your own! I’m so excited about this new series! 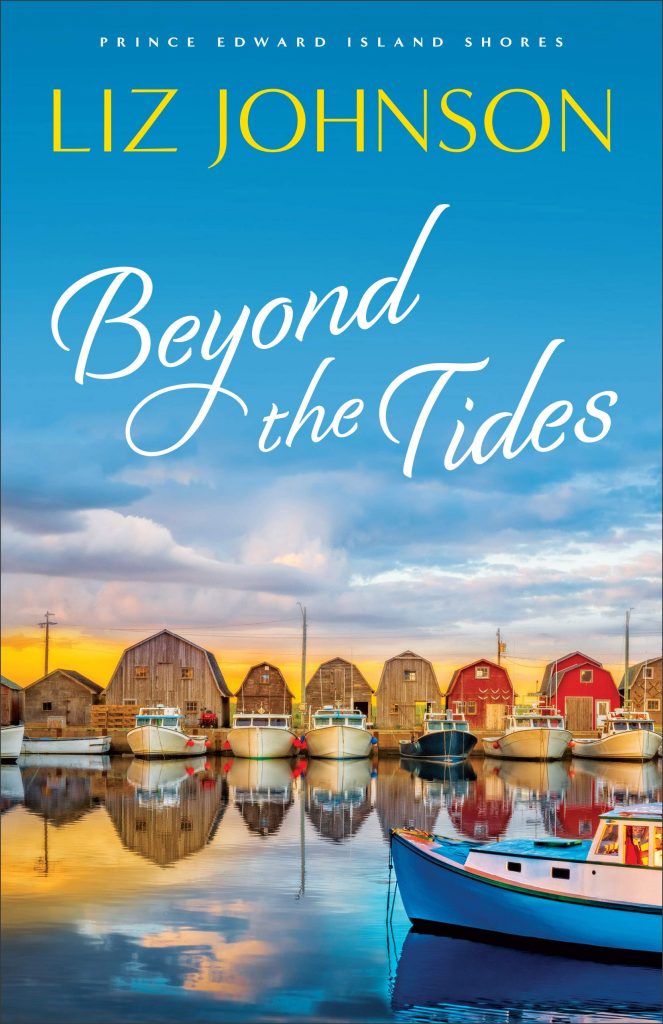 When Meg Whitaker’s father decides to sell the family’s lobster-fishing business to her high school nemesis, she sets out to prove she should inherit it instead. Though she’s never had any interest in running the small fleet–or even getting on a boat due to her persistent seasickness–she can’t stand to see Oliver Ross take over. Not when he ruined her dreams for a science scholarship and an Ivy League education ten years ago.

Oliver isn’t proud of what he did back then. Angry and broken by his father walking out on his family, he lashed out at Meg–an innocent bystander. But owning a respected fishing fleet on Prince Edward Island is the opportunity of a lifetime, and he’s not about to walk away just because Meg wants him to.

Meg’s father has the perfect solution: Oliver and Meg must work the business together, and at the end of the season, he’ll decide who gets it. Along the way, they may discover that their stories are more similar than they thought . . . and their dreams aren’t what they expected.

Bestselling author Liz Johnson invites you back to Prince Edward Island for a brand-new series about family, forgiveness, and the kind of love that heals all wounds.

Morning had a terrible habit of arriving too early, at least as far as Meg Whitaker was concerned. And it was too fond of adding a chill to the summer air at the shoreline.

She hunched into her oversized sweater and shivered against a gust of wind as a pair of headlights bounced into the red dirt parking lot across from the wharf. Finally. Her dad was already five minutes late, and she had only dragged herself from her bed at such an absurd hour because he’d told her he needed to see her, and this was the only time that Mama Potts could stay with her mom. Besides, after decades on the water, her dad loved this time of day.

As the vehicle rolled to a stop and flipped off its lights, she could see even in the darkness that it wasn’t her dad’s cherished red truck. This one was baby blue and sported over half a dozen rust spots from more than one harsh winter.

Squinting hard at the truck, she could make out the form of a man sitting behind the wheel. His shoulders were broader than her dad’s lanky form, his neck straight like steel. But she couldn’t see his features and didn’t recognize his vehicle.

He didn’t open his door. He didn’t turn his head. He didn’t move. He just sat there. Staring at her.

Meg could feel the weight of his gaze, every ounce of it. She cringed at a memory she’d tried so hard to forget. Only one other man—well, he’d been a boy then—had ever stared at her so intently that she’d physically felt it. A few days later he’d destroyed her science fair project, her chance at a prestigious fellowship, and all hope of being accepted to Yale.

No way he was the one sitting in a truck at her dad’s dock at 4:45 in the morning, staring at her through the darkness. He was barely a silhouette behind a windshield. But she couldn’t look away. She could only wrap her arms about herself and pray that this man wasn’t the one she remembered.

When the low purr of her dad’s truck finally reached her on the cement wharf, Meg jerked her head up. The truck’s shiny coat glittered even in the low light as he pulled halfway down the narrow lane and parked.

“Sorry I’m late, hon.” Her dad’s long strides ate up the ground between them until he greeted her with a peck on the cheek. “Your mom had a rough morning.”

Meg cringed. She hadn’t even thought about why her dad might be late, what he’d been doing in the morning hours that most people still considered night. “How is she?”

They all were. Tired of late nights and far-too-early mornings. Tired of praying for an answer that never seemed to appear. Tired of the mystery illness that was stealing her mom’s mobility and very life one breath at a time.

Meg squeezed his big hand, ignoring the calluses from years of pulling in lines and tying traps. “How are you?”

His fingers gripped hers, and his gaze dropped to the space between his feet. “I’m ready to let go.”

“Let go? Of what?” Surely not her mom. He hadn’t asked her there to make some grand announcement about how he was throwing away thirty-seven years of marriage because life had become something other than it was supposed to be. He wasn’t that kind of man.

He shook his head, his shoulders slumped under a weight she couldn’t see.

She grabbed his elbow. “What’s going on?”

He brushed an errant lock of hair back from her face, even as the wind whipped more of it free from her ponytail. “I thought I’d be able to wait until you were married.”

What was he talking about? She hadn’t had a serious boyfriend in years. And even then they’d discussed marriage exactly once—just long enough for them to both know they weren’t ready. They hadn’t been particularly in love either.

“Dad.” Her voice turned firm. “You’re not making any sense. What are you talking about?”

“After you said you didn’t want Whitaker Fishing and the Pinch, I hoped you’d marry someone who did. Or maybe you’d have kids who wanted it.”

“The business?” Her gaze swept over the fishing boats rocking in the narrow dock, sitting low in the water beside the pier. Pale blue and white and barnacle free, Just a Pinch had been her father’s pride and joy for more than a decade.

Okay, technically he’d asked her a few years ago if she wanted to take over the business. But how could she run a fishing company when she couldn’t stomach stepping aboard a boat? She’d never earn the respect of the crew—or enjoy a day at her job. Still, there was something terrifying about the idea that the license her great-grandpa had bought would go to someone without the Whitaker name. Even when everything else seemed unstable, Whitaker Fishing had been theirs.

He held up a hand that stilled her outburst, but it was the calm shake of his head that tore her heart apart. “You said you didn’t want it.” Confusion seemed to add a question to the statement, his eyes sad. “Have you changed your mind?”

She tried to form a response, but her tongue couldn’t shape it. She managed only a slight shrug.

There was no need for him to finish his thought. She knew. While the income from the sale would allow them to enjoy the days her mom had left, he really only cared about spending them with her. The money would be nice later. After.

And there would be plenty of money. Lobster fishing fleets were in high demand—mostly because there were a limited number of fishing licenses around Prince Edward Island. They rarely came up for sale, and when they did, they went for small fortunes, and her dad had been approached by brokers many times over the years.

Her eyes swung toward the blue truck. Was that a broker sitting inside?

She quickly dismissed the idea. Brokers on that level didn’t drive rusted clunkers. So who was he, and what did he want with her and her dad?

“There has to be another way.” But even as she said it, she knew it wasn’t true.

“Your mom and I have talked about it. I want to spend every moment I can with her. I’ve decided to sell.” His mouth twisted on the words, his facade beginning to crack, and she could do nothing but throw her arms around her dad and hold him tightly.

“I’m so sorry,” she whispered into his shoulder, reining in her own emotions. He didn’t need her grief too. He needed her to be strong and sure.

She’d heard fishermen talk of ships in distress looking for any port in the storm. But her mom and dad didn’t need just any port. They needed to be able to lean on her in the face of the unknown. She couldn’t buckle under her own grief. She wouldn’t.

With a gentle pat on her back and a sniff just above her head, her dad pulled away. His long legs carried him back a step just as the glow of the morning sun lit up the ocean where it met the east, turning the water from black to inky blue. “I have to tell you something else.” His furry black eyebrows drew together, meeting over his crooked nose.

Her stomach dropped. There was no way this was good news. But what else could he possibly add?

Was there another Oliver Ross on the island she didn’t know? Maybe this one was from away. From far, far away. Maybe he wasn’t the boy she’d gone to school with or the one she’d actively been avoiding for more than a decade. And it had required some concentrated effort not to run into him since she’d returned to Victoria by the Sea. It was worth it for her sanity.

But when her dad motioned in the direction of the truck, she knew. She knew with utter certainty that he was selling his business to her arch nemesis. 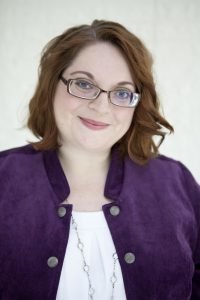 Liz Johnson is the author of more than a dozen novels, including A Sparkle of Silver, A Glitter of Gold, The Red Door Inn, Where Two Hearts Meet, and On Love’s Gentle Shore, as well as a New York Times bestselling novella and a handful of short stories. She works in marketing and makes her home in Phoenix, Arizona.

Revell is offering a print copy of Beyond the Tides by Liz Johnson to THREE of my readers! (US only. Void where prohibited by law or logistics.) This giveaway is subject to Reading Is My SuperPower’s giveaway policies which can be found here. Enter via the Rafflecopter form below.


What about you? What makes you want to read Beyond the Tides by Liz Johnson?

29 responses to “Book Spotlight (and a Giveaway!): Beyond the Tides by Liz Johnson”