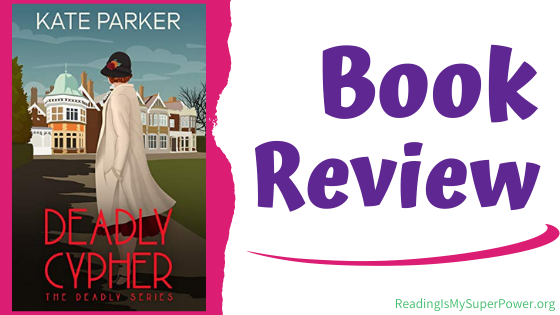 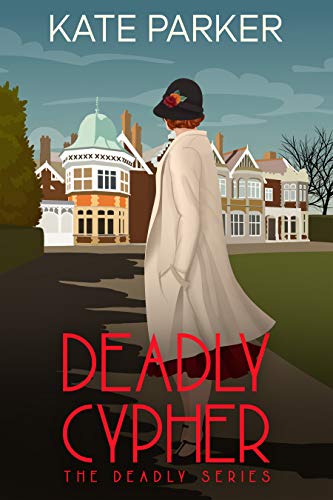 Could a murder at Bletchley Park cost Britain the war?

November, 1939. The British government has assembled a small group of intellectuals at an estate north of London as part of a top-secret codebreaking effort. Everything about it is clandestine. The facility is ringed with a veil of silence until one of the young female linguists is murdered.

Britain’s counterintelligence spymaster tasks Olivia Redmond with finding the killer and the motive. Olivia is sent in alone, without clues or suspects.

Did the murder victim uncover a mole? Could Britain’s program to break German enigma cyphers be compromised?

If Olivia fails, it could mean the destruction of Britain.

Before starting Deadly Cypher, I’d never read a book by Kate Parker, nor by default had I read another book in the Deadly series. That said, I didn’t have any problem catching on to the main characters or the past events that led to Olivia’s going undercover at Bletchley Park, though I did think the story started a bit abruptly (which briefly made me think I was missing something, even though I really wasn’t).

One of my favorite things about this book is the insight into the WW2 codebreakers at Bletchley Park. From not being able to tell anyone what they were doing, to both the working & lodging accommodations, to the whole set-up in general, I found this glimpse to be fascinating and it made me want to read more about them. It’s into this world that Olivia goes undercover to solve the mysterious murder of a young woman, in fact takes her place as a linguist and stays in her room. I liked how the author uses this to make Olivia’s questions about her death feel like a natural curiosity, as a means to avoid a similar fate. I also liked how many possibilities there were for motive – was it a jilted lover or something related to the codebreaking or something else altogether? This created an atmosphere of not being sure who to trust, even as I began to genuinely like some of the side characters.

Bottom Line: British historical cozies have a slightly different feel than a regular cozy, but I find them both delightful. Deadly Cipher fits the bill very well with intriguing characters and a congenial narrative voice. The mystery has several layers and readers will enjoy unpacking them with Olivia as the story progresses. I did feel it was a bit longer than necessary, and I had a difficult time staying invested, at times, during the middle of the story. However, the last quarter of the book picked up again and held my attention until the end. Grab your favorite hot beverage, put on your Agatha Christie house slippers, and cozy up to this read that’s full of intrigue and clues!

Deadly Cypher will be on sale until August 30, 2021
when it will be sold at full price. 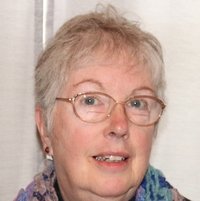 With her love of travel, Kate Parker sets her novels overseas. Once home from her research trips and armed with hot tea and chocolate, she can be found clicking away on her keyboard, hiking the hills of central North Carolina, and spoiling her 90 pound muse puppy. She’d tell you what she did before she retired, but then she’d have to use certain skills to eliminate you. She pens stories to entertain readers who enjoy action and murder in tales about plucky heroines, quirky characters, and difficult situations in a bygone era. Her stories are sweet, as in no graphic sex, violence, or language. Her heroines remain ladylike while chasing murderers and escaping danger. Well, as ladylike as scratching, punching, and kicking can be. 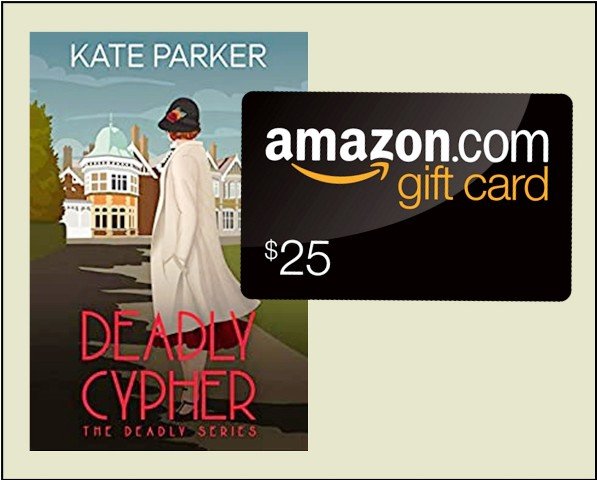 What about you? What makes you want to read Deadly Cypher by Kate Parker?

10 responses to “Book Review (and a Giveaway!): Deadly Cypher by Kate Parker”