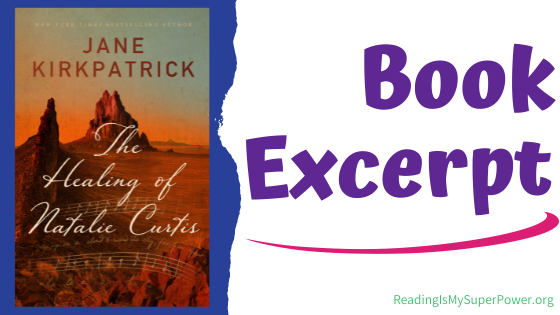 I’m delighted  today to give you a peek inside The Healing of Natalie Curtis by Jane Kirkpatrick with an excerpt – and a chance for three of you to win a copy of your own! 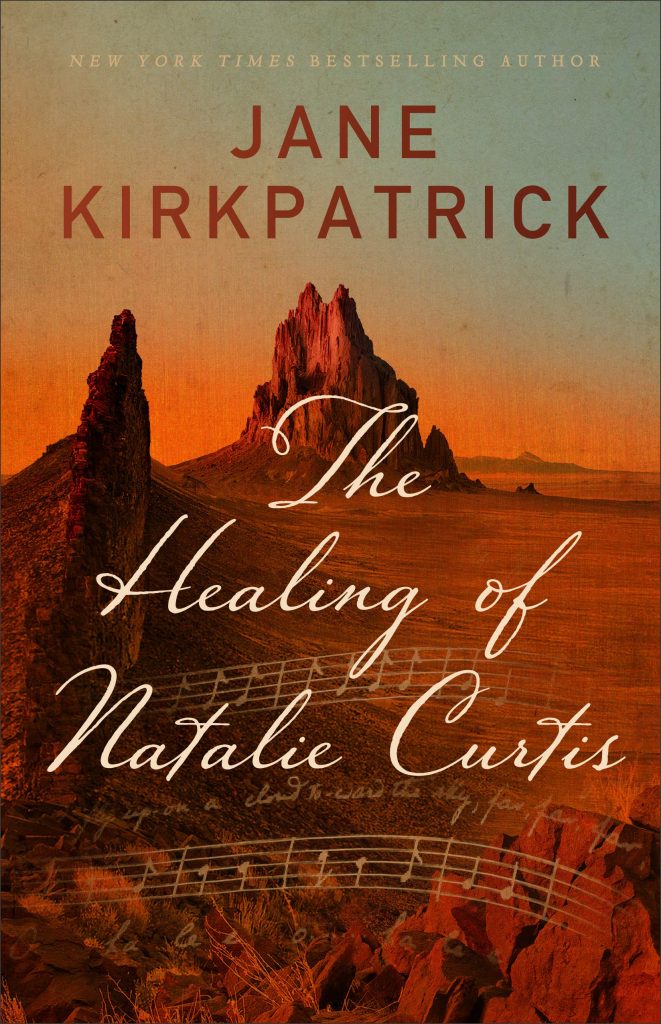 She came to the West for rest . . . what she found was a passion.

Classically trained pianist and singer Natalie Curtis can’t seem to recapture the joy that music once brought her. In 1902, her brother invites her to join him in the West to search for healing. What she finds are songs she’d never before encountered–the haunting melodies, rhythms, and stories of Native Americans.

But their music is under attack. The US government’s Code of Offenses prohibits America’s Indigenous people from singing, dancing, or speaking their own languages. Natalie makes it her mission not only to document these songs before they disappear but to appeal to President Teddy Roosevelt himself, who is the only man with the power to repeal the unjust law.

Award-winning author Jane Kirkpatrick weaves a lyrical novel based on a true story that captivates to the very end.

“It’s been nearly five years, Nat.” The kindness in his voice, not pitying but sympathizing, caused her to blink back tears.

He patted her fingers as he pulled them through his bent elbow. “Promise me we’ll talk about it later.”

But then he’d headed to the West and he had changed.

As had she five years before.

“They’re waiting for you,” she said.

Arm in arm they sauntered into the dining room where siblings and parents greeted George with joyous shouts. Mimsey, as the Curtis children called their mother, usually so organized and proper, fluttered with tears in her eyes as she clung to George,  welcoming home her wayward son. “Come, come. Tell us all about your latest adventures. How was the train ride?” Mimsey took his hands in hers. “You’re chilled.” Then, releasing them, “Are you home for good, one can only hope?”

“I’m used to desert heat.” George rubbed his palms, as though before a fire.

“My friends are all atwitter wanting a luncheon with you to hear your stories. We’ll get that on the schedule.” She pronounced it shed- ule. Natalie remembered she’d picked that up on that last trip to Europe. The healing tour that didn’t heal.


“In due course, Mimsey.” Her father intervened. “Let’s let the lad have a bite to eat. Cook’s prepared something healthy for you.” Their father— called Bogey by his children and friends— stood with hands clasped behind his back, warming himself at the fireplace in the living room. “A little food will warm you up. Just what the doctor ordered.”

Their father was a prominent physician, currently an emeritus professor. As a major in the army, he had attended President Lincoln’s bedside during his final hours and helped with the autopsy. He’d known sorrow, and Natalie knew he grieved for her current emotional state that he seemed powerless to change. She couldn’t change it either. Or hadn’t.

Bogey herded his family into the dining room. Natalie held back as the siblings crowded around George at the table, passing him the silver saltshaker, the platters with cheeses and cold chicken and ham that the cook brought in. Pickles and coarse brown bread were next. George told his stories with wide swathes of his arms. He was more animated than Natalie remembered him being. He’d always been the shy one, along with her. She’d been bold only in her music, excelling at everything she tried, especially the piano. Until that day.

Laughter. Oohs and ahhs and exclamations. She scanned the room of her brothers and sisters. Except for George, they all lived together, still. Constance was nearly forty. Natalie supposed they were considered “old maids,” or “at home” as the latest census described single women. She as well. She had hoped for a life beyond, maybe one day marrying and managing a household staff— after her career. She’d been on the road toward that when her life— like shattered silk— ripped apart.

She shook her head of the painful memory. She focused instead on the light in George’s eyes, noted the tiny crow’s- feet, the tanned face with laugh lines. He was thirty- one and wore the look of an explorer, someone who had gone beyond expectations, even his own.

She hadn’t heard what he’d said.

“About coming to Arizona with me. And California. And New Mexico. Some people seem to think New Mexico is still a part of Mexico.”

“Isn’t it?” This from Marian, the youngest Curtis at twenty- two.

Her siblings teased Marian for not knowing such a fact of geography, and Natalie was grateful the subject had changed as she watched them chatter. George had a broken canine tooth. There was probably a story about what happened to cause that. She’d have to ask.

“You haven’t answered my question.” George returned to her.

“She couldn’t possibly make such a trip,” Mimsey said. “She’s not strong enough.”


“And what would she do there?” Miriam asked. “Sign on as a ranch— what did you call yourself—a ranch hand?”

“Let her breathe in the air. That alone will heal her. Look what it did for my asthma.”

“You do look healthy,” their father- doctor said. “Good to see that, son. Good to see.” He appeared to consider George’s offer. “It might benefit Natalie.”

“No.” Mimsey’s word was dressed in finality. Her husband  frowned and she added, “She’s simply not strong enough.”

“I am here.” Natalie spoke more forcefully than she’d intended. “In front of you all. Please, don’t talk about me as though I’m not present.”

Silence like an early morning fog filled the formerly boisterous room. Her siblings looked away, caught each other’s eyes. Pity. They pity me.

George cleared his throat. “I nearly forgot. I brought gifts for you.” He wiped his mouth with the linen napkin. “Let me get my pack.” 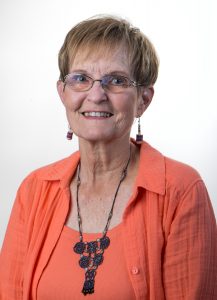 Jane Kirkpatrick is the New York Times and CBA bestselling and award-winning author of forty books, including Something Worth Doing, One More River to Cross, Everything She Didn’t Say, All Together in One Place, A Light in the Wilderness, The Memory Weaver, This Road We Traveled, and A Sweetness to the Soul, which won the prestigious Wrangler Award from the Western Heritage Center. Her works have won the WILLA Literary Award, the Carol Award for Historical Fiction, the 2016 Will Rogers Gold Medallion Award and 2021 Silver award. Jane divides her time between Central Oregon and California with her husband, Jerry, and Cavalier King Charles Spaniel, Caesar. Learn more at www.jkbooks.com. 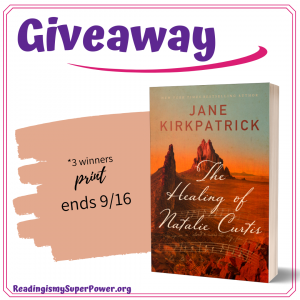 Revell is offering a print copy of The Healing of Natalie Curtis by Jane Kirkpatrick to THREE of my readers! (US only. Void where prohibited by law or logistics.) This giveaway is subject to Reading Is My SuperPower’s giveaway policies which can be found here. Enter via the Rafflecopter form below.


What about you? What makes you want to read The Healing of Natalie Curtis by Jane Kirkpatrick?

20 responses to “Book Spotlight (and a Giveaway!): The Healing of Natalie Curtis by Jane Kirkpatrick”