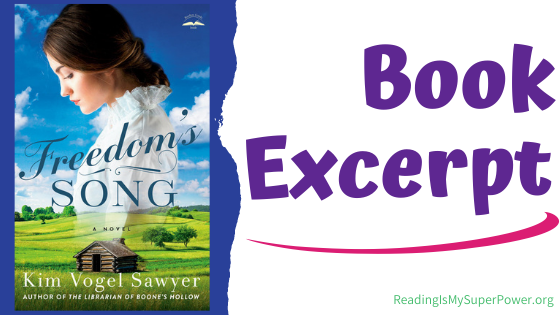 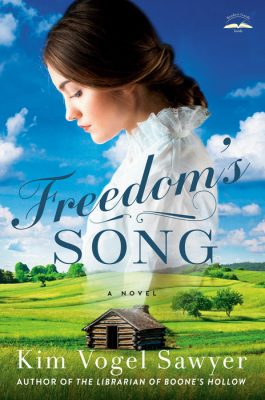 Her voice made her a riverboat’s darling—and its prisoner. Now she’s singing her way to freedom in this powerful novel from the bestselling author of The Librarian of Boone’s Hollow.

“[An] enjoyable faith-filled adventure . . . Sawyer’s episodic narrative and rich assortment of characters fighting for freedom provide the story with many twists and unexpected side-plots.”—Publishers Weekly

Indentured servant Fanny Beck has been forced to sing for riverboat passengers since she was a girl. All she wants is to live a quiet, humble life with her family as soon as her seven-year contract is over. So when she discovers that the captain has no intention of releasing her, she seizes a sudden opportunity to escape—an impulse that leads Fanny to a group of enslaved people who are on their own dangerous quest for liberty. . . .

Widower Walter Kuhn is overwhelmed by his responsibilities to his farm and young daughter, and now his mail-order bride hasn’t arrived. Could a beautiful stranger seeking work be the answer to his prayers? . . .

After the star performer of the River Peacock is presumed drowned, Sloan Kirkpatrick, the riverboat’s captain, sets off to find her replacement. However, his journey will bring him face to face with his own past—and a deeper understanding of what it truly means to be free. . . .

Uplifting, inspiring, and grounded in biblical truth, Freedom’s Song is a story for every reader who has longed for physical, emotional, or spiritual delivery.

Fanny lay belly down, her cheek plastered against a cold, damp surface. Something wet and stringy covered her face. Something wet and heavy held her flat. Where was she? With effort, she forced one eyelid open. Dove-gray shadows diminished her view. She squinted past the veil of her tangled hair but couldn’t discern her location. She was too tired to care. She closed her eye again.

“She dead?” The whispered query in a child’s high-pitched voice came from behind Fanny.

“Reckon so,” said another voice, deeper in tone but equally hushed. “Fill the bucket, like Grandpap said.”

Fanny wanted to turn her head and see who spoke, but her muscles refused to cooperate.

“Seems awful sad to leave her layin’ here all by herself.” True sympathy tinged the child’s words.

“No need worryin’ over her, Dathan. Her folks’ll be searchin’. She git found by an’ by.”

“Reckon they’ll find us, too?”

The child’s panicky question sent Fanny’s pulse into a skitter. Sloan! Would he find her? She had to get up, to hide, to save herself. But her muscles refused to move.

“We’ll be gone by then. Just fetch that water ’fore the sun comes full up.”

The swish of skirts let Fanny know the woman was moving away, even though her footsteps made no sound against the moist clay bank. Her ears recognized the gentle slosh of a bucket dipping up water, then the rustle of movement through brush. Silence fell, save the familiar soft flow of the river. The people were gone.

But Sloan might come. If he found her, he’d close her in her room again. He’d keep her beyond their agreed-upon length of service—maybe forever. She would never see Da and Ma or her sisters again. She needed to leave, too.

Fanny willed her elbows upward and planted her palms against the cool ground. Groaning with effort, she pushed herself to her knees. Dizziness assailed her. She remained on all fours, head hanging low and chest heaving, for several minutes. When the sensation of spinning cleared, she gritted her teeth in determination and struggled to stand. She swayed, the unmoving surface beneath her feet unfamiliar, but remained upright.

She glanced down her length. The cloak was gone, but her many layers of waterlogged clothing still weighted her. Her legs were wobbly, and she’d lost both shoes. Cold from the damp riverbank seeped through her thin, torn stockings. She shivered, yet the moist earth between her toes raised happy memories of her childhood, walking the garden rows with Ma. Even so, her soles were tender after so many years of wearing shoes. She’d need help to make it to a train station.

Still unsteady, she sent a cautious look up and down the riverbank. Sloan would certainly search by boat. No boats in either direction. She blew out a small breath of relief and forced her muddled brain to think. Finding a kind farmer who might be willing to transport her to the closest town was her best hope for escape, but no glimpses of rooftops or wisps of smoke trailing upward against the pale gray sky that might indicate a chimney directed her. She needed help, but how to find it?

She shifted her gaze to the thick brush lining the riverbank. Barely discernible indentions in the clay led to a gap in the bushes. Was this the pathway the two water fetchers had taken? They’d mentioned a grandfather. Would he be willing to assist her? She had no other choice. Sending up a prayer for God’s protection and guidance, she turned herself in a clumsy half circle and staggered for the narrow break in the heavy row of bushes.

Her water-soaked clothing and trembling limbs slowed her progress, and it seemed to take years to push through the tangle of brush. But finally she stepped into a small clearing surrounded by trees with peeling bark. Their thin branches, sparsely decorated with leaves, formed a lacelike canopy over the open area.

Several people, their heads low, sat in a circle in the center of the clearing. Under the glow of moonlight, she made out a broad-shouldered white-haired man, three women of varying ages, a little boy, and a baby girl—six people in all, each wearing bulky layers of threadbare clothing. The man murmured something in a deep, husky voice, but Fanny couldn’t hear the words. Suddenly she realized he was praying.

Instinctively, she bowed her head, too. She remained at the edge of the cleared space until she heard a chorus of soft amens. She lifted her gaze as those in the circle did so, and her eyes connected with the little boy’s. He jerked as if bee stung, then scuttled backward like a crab.

As if synchronized, the others all looked in her direction. The youngest of the women bolted to her feet, the skirts of her calico dress swirling. She rasped, “She—she alive!”

Fanny blinked several times, a smile pulling at the corners of her lips. She struggled against the weight of her drenched clothing and took a single step toward the group. “I am. I am alive. Oh, thank You, Jesus.” Her voice emerged loud in the otherwise quiet early morning. Croaky but strong.

The utterance startled Fanny into silence. She set her lips tight and stared at the man. He was big boned and stern looking like Burke. Only the fact that she’d heard him praying kept her from gathering the strength to run away.

The little boy leaped up and scrambled to the old man. “What we gonna do, Grandpap? She done seen us. She can turn us in.”

The frantic whisper and genuine fear in the child’s eyes pierced Fanny. She hadn’t meant to frighten anyone. She started to assure them, but the man spoke first.

“Hush that.” He put his hand on the boy’s shoulder and leaned sideways a bit, seeming to peer beyond Fanny. “You all by yo’self, miss?” Wariness colored his expression and soft query.

She nodded. “I . . . I need help.” She lifted her hand in a gesture of entreaty. “Please, can you direct me to a railway station?”

The man stared at her hand for several silent minutes. The distrust in his eyes brought a swell of defeat. He was going to send her away without offering direction. Fanny turned toward the brush.

Fanny looked over her shoulder.

He stretched his leathery palm to the spot of ground he’d vacated. “Set down an’ have some bread. ’Pears you could use some bolsterin’.” He whispered, his low voice soothing in its delivery. “Talk’ll come later.” 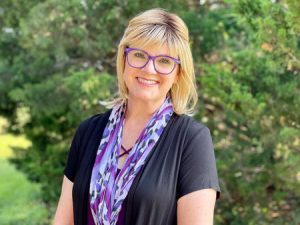 Kim Vogel Sawyer is a highly acclaimed bestselling author with more than one million books in print in seven different languages. Her titles have earned numerous accolades including the ACFW Carol Award, the Inspirational Readers’ Choice Award, and the Gayle Wilson Award of Excellence. Kim lives in central Kansas with her retired military husband, Don, where she continues to write gentle stories of hope. She enjoys spending time with her three daughters and her grandchildren.

WaterBrook is offering a print copy of Freedom’s Song by Kim Vogel Sawyer to TWO of my readers! (US only. Void where prohibited by law or logistics.) This giveaway is subject to Reading Is My SuperPower’s giveaway policies which can be found here. Enter via the Rafflecopter form below.


What about you? What makes you want to read Freedom’s Song by Kim Vogel Sawyer?

19 responses to “Book Spotlight (and a Giveaway!): Freedom’s Song by Kim Vogel Sawyer”