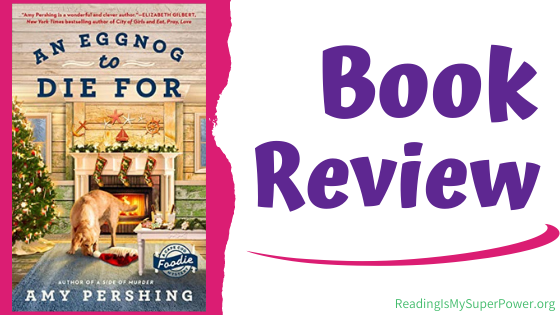 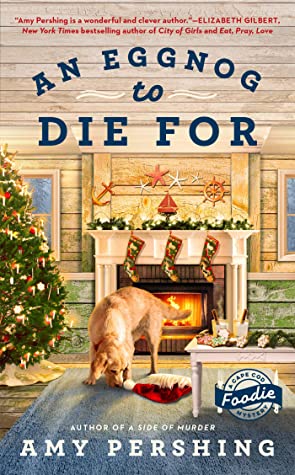 Christmas is coming to Cape Cod, but when Sam Barnes finds a very dead Santa in a very hip restaurant, it’s up to her to sift out suspects who have been naughty vs. nice….

Professional foodie Samantha Barnes has a simple Christmas list: a quiet holiday at home with her dog and a certain handsome harbor master; no embarrassing viral videos; and no finding dead bodies. Unfortunately she’s got family visiting, she’s spending a lot of time in front of the camera, and she’s just stumbled over the lifeless body of the town’s Santa Claus.

Plus, Sam’s plans for Christmas Eve are getting complicated.  There’s the great eggnog debate among her very opinionated guests.  There’s the “all edible” Christmas tree to decorate.  And there’s her Feast of the Five Fishes prepare. Nonetheless, Sam finds herself once again in the role of sleuth. She needs to find out who slayed this Santa—but can she pull off a perfect feast and nab a killer? 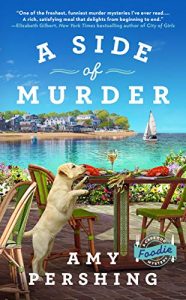 I’m always on the lookout for new-to-me cozy mystery series to follow – it’s the childhood Murder She Wrote & now Hallmark Mysteries fan in me, I guess. I somehow missed reading book one in Amy Pershing’s Cape Cod Foodie Mysteries but jumping in with book two was delightful nonetheless. I’m definitely looking forward to book three!

An Eggnog to Die For has a lot going for it: a charming northeastern setting at Christmas, engaging characters (main & supporting), adorable pets, a plucky & extroverted restaurant reviewer-slash-former-chef, her introverted & swoony harbormaster boyfriend, droolworthy food & drink mentions, and the best part – a mystery that took me by surprise more than once. I really enjoyed meeting Samantha (Sam) and her gaggle of family & friends, including the aforementioned swoony boyfriend Jason. Each character is winsome in his/her own way, and the fact that we are treated to Sam’s perspective through the first person narrative makes her particular character even more relatable. She’s witty and intuitive, very perceptive, engaging, and exactly the kind of person you would want to hang out with in real life – or, you know, solve your murder or clear your name, should worse come to worse lol.

Speaking of Sam’s murder-solving abilities, Pershing has crafted a skillfully twisted plot with plenty of suspects and some turns you may not be expecting. I was truly stunned by one such particular curve, though in hindsight I shouldn’t have been. The author expertly mixes authentic clues among the red herrings in such a way that it’s easy to look back and see the clues all come together but in the moment, when you’re reading it for the first time, you won’t be able to distinguish one from the other.

Bottom Line: Witty & smart, An Eggnog to Die For by Amy Pershing is deliciously entertaining. The mystery is excellent in plotting & technique, keeping readers guessing when it comes to whodunnit. Sam, Diogi (which is the best dog name ever when you know where it came from) and her crew of amateur sleuths (aka her family & friends) are very likable and relatable too. The perfect cozy to get you in the Christmas spirit, murder notwithstanding.


Reviewer’s Note: Readers may want to be aware that there is some mild cursing (and one particularly strong instance) in this novel. 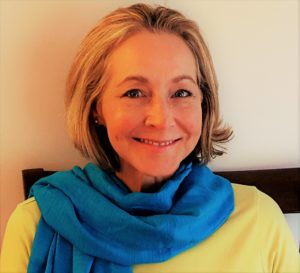 Amy Pershing, who spent every summer of her childhood on Cape Cod, was an editor, a restaurant reviewer and a journalist before leading employee communications at a global bank. A few years ago she waved goodbye to Wall Street to write full time. An Eggnog to Die For is the second of the Cape Cod Foodie mysteries featuring Samantha Barnes, a disgraced but resilient ex-chef who retreats home to Cape Cod where she finds herself juggling a new job as the local paper’s “Cape Cod Foodie,” a complicated love life, a posse of just-slightly-odd friends, a falling-down house, a ginormous puppy and a propensity for falling over dead bodies. Kirkus Reviews gave An Eggnog to Die For a starred review, saying, “A delightful sleuth, a complex mystery, and lovingly described cuisine: a winner for both foodies and mystery mavens.” A Side of Murder, the first of the Cape Cod Foodie mysteries, which Elizabeth Gilbert called “the freshest, funniest mystery I have ever read,” was the first book in the series.  The third, Murder Is No Picnic, will be published in May 2022. 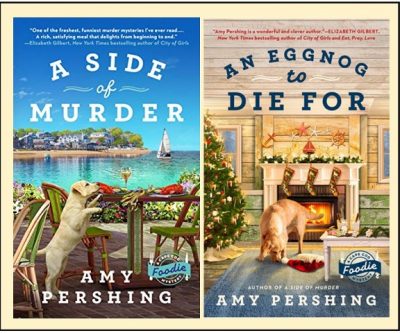 What about you? What makes you want to read An Eggnog to Die For by Amy Pershing?

23 responses to “Book Review (and a Giveaway!): An Eggnog to Die For by Amy Pershing”