WOOHOO!!!!! IT’S THAT TIME OF YEAR AGAIN!!! ARE YOU EXCITED?!? It’s time for our annual blog series spotlighting (over 60 this year) new and recently-released Christmas reads! This is our largest year yet, with the most authors & books, and we’re back with an all-new look, too.

Christmas is still 47 days away, according to Google BUT since 2021 hasn’t been that much better than 2020 was, I think we all could benefit from some extra Christmas cheer again this year. ‘Tis the season when I really start craving cozy Christmas reads (even more than I do the rest of the year lol), so now is the perfect time to jump right into these posts!

Beginning now and continuing through just before Christmas, I’m going to spotlight several Christmasy releases from 2021. So… snuggle in, grab your fave hot beverage and comfiest blanket, turn on some Christmas tunes and start your bookish Christmas list! Oh… and did I mention there are GIVEAWAYS with EACH POST in this series??!! (Because authors are awesome!)

Today’s featured book is the origin story, so to speak, of one of my favorite fictional couples – Anna & Felty Helmuth! Plus the author shares an excerpt from the book 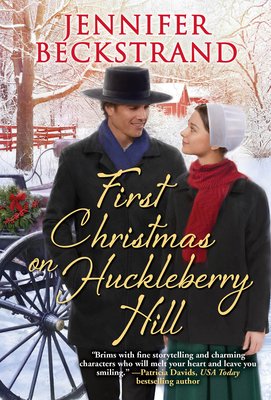 She can’t cook, sew, sing, or clean. And no matter how hard young Anna Yoder tries, she’d much rather help people in trouble than be a well-behaved pretty face and properly perfect Amish maidel. So she instantly reaches out to her old schoolmate, Felty Helmuth, when their Amish town ostracizes him for his Korean War army service. He’s still the only one who’s ever understood Anna—and liked everything from her green Jello carrot salads to her love of books. And this holiday season, she can’t help hoping that somehow she and Felty can find a way to be the perfect match . . .

Felty sensed he was called by Gotte to serve his country, though it went against his community’s peaceful ways. Troubled by his wartime experiences, he is resigned to being an outsider avoided by most eligible Amish girls. But lively, intelligent Anna has grown into a warm-hearted generous woman who accepts Felty for who he is. And in the face of family and community opposition, he and Anna will take a leap of faith to prove they are made for each other—and a lifetime of happiness.

Anna leaped out of her skin at the sound of a man’s voice. She whirled around and came face to chest with a gray-green, perfectly pressed military uniform and what looked like an impressive collection of medals. She tilted her head back, way back, to get a look at the owner of the medals. He was tall, and she, unfortunately, was barely five feet, and that was only when she squared her shoulders and stood up perfectly straight.

Anna’s heart skipped seven whole beats. Backing away from him as if he was a ghost, she caught her heel on the edge of the curb and fell ungracefully on her hinnerdale into the snow on the sidewalk.

The soldier’s all-too-familiar and very attractive smile disappeared immediately, and he rushed to Anna’s aid, holding out his hand and pulling her up before Elmer or Isaac even had a chance to react. Of course, Isaac wouldn’t have helped Anna out of the deep well, but Elmer was a little more thoughtful. “Are you all right?” the soldier said, his hand lingering in Anna’s for a second too long.

Anna pulled her hand from his, brushed off her cape, then discreetly tapped the snow off her backside while the soldier gazed at her in concern. “I’m fine,” she said. “You just startled me, that’s all. I sort of thought you were dead.” She felt her face get warm. Felty Helmuth was obviously not dead, and it was impolite of her to mention it. She clamped her mouth shut. She most certainly wasn’t going to mention his missing leg.

He didn’t seem to take offense that she thought he had died. His smile came back full force and nearly knocked her down again with its brilliance. “You meet with the most unexpected surprises in Bonduel.” His face seemed to glow with happiness. “Your eyes are still as blue as Lake Shawano on a clear fall morning.”

Anna couldn’t swallow. Was that normal when a boy looked at someone like he was looking at her?

“You’ve grown taller,” he said, as if it was the most impressive accomplishment in the world.

Laughter escaped her lips in an unladylike explosion. “I’ve been this tall since sixth grade.”

Felty grinned and shrugged, never taking his gaze from her face. “Then maybe you’ve just grown prettier, if that is possible.”

She made a real effort to swallow. It wouldn’t be seemly if she drooled all over herself in public. “I…I haven’t grown taller, but you have.”

He smiled wryly. “For sure and certain. I didn’t mean to, but I put on three inches in Korea.”

Anna glanced at Elmer. He and the other boys were frozen where they stood, staring at Felty as if he was a two-headed goat. She couldn’t blame them. Felty was probably the most magnificent sight she had seen in all her nineteen years, except for maybe the first time she saw her cousin’s baby who was born with two thumbs on her right hand. Felty was dressed in a smart, dull green Army uniform with not a wrinkle in sight. There were four pockets on the front of his jacket and no shortage of shiny gold buttons. He wore a lighter green shirt with a darker green Englisch tie, and his hair was cut so short on the sides, she could see his scalp underneath it. He held his hat in one hand and an olive green duffel bag in the other. Anna couldn’t see a gun anywhere. Didn’t soldiers carry guns?

And then there was the scar, two full inches long down the left side of his face. Whatever had happened to him must have hurt, but the scar did nothing to mar his features. If anything, it made his face more interesting and mysterious, like Mr. Darcy in Pride and Prejudice.

Before she let her mind get carried away with Felty’s magnificence, Anna took a deep breath and pulled her thoughts back to earth. Felty was tall, imposing, and very handsome. He was also the Helmuths’ wayward son who had left home more than two years ago to fight in the Korean War. He had shamed his parents and embarrassed the community. Anna certainly couldn’t forget the stain that Felty had put on the entire district with his decision. She would be wise not to have anything to do with him.

She willed herself to stop staring and cleared her throat. “Ach, vell, Felty. It is nice to see you again, but we have to be going.”

His bright smile faded slightly, but he looked at her as if she was the kindest person in the world. “It is wunderbarr to see you too. You are more beautiful than I remember.” 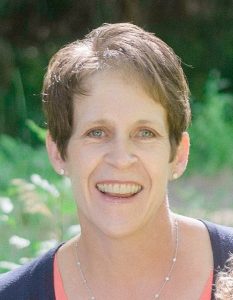 Jennifer Beckstrand is the two-time RITA-nominated, #1 Amazon bestselling Amish romance author of The Matchmakers of Huckleberry Hill series, The Honeybee Sisters series, and The Petersheim Brothers series for Kensington Books. Jennifer has always been drawn to the strong faith and the enduring family ties of the Plain people and loves writing about the antics of Anna and Felty Helmuth, the Honeybee sisters’ aendi Bitsy, and Alfie and Benji Petersheim. Jennifer has written 22 Amish romances, a historical Western, and the nonfiction book, Big Ideas. Jennifer is represented by Nicole Resciniti of the Seymour Agency. She and her husband have been married for 35 years, and she has six children and eight adorable grandchildren, whom she spoils rotten. 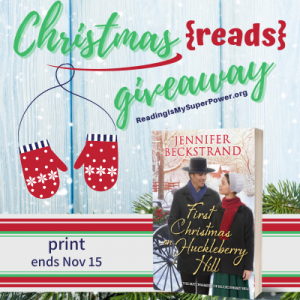 Jennifer Beckstrand is offering a print copy of First Christmas on Huckleberry Hill to one of my readers! (US only. Void where prohibited by law or logistics.) This giveaway is subject to Reading Is My SuperPower’s giveaway policies which can be found here. Enter via the Rafflecopter form below.


What about you? What makes you want to read First Christmas on Huckleberry Hill by Jennifer Beckstrand?