Christmas is still 44 days away, BUT since when has that stopped me from craving cozy Christmas reads (even more than I do the rest of the year lol)? Beginning this week and continuing through just before Christmas, I’m going to spotlight several Christmasy releases from 2021. So… snuggle in, grab your fave hot beverage and comfiest blanket, turn on some Christmas tunes and start your bookish Christmas list! Oh… and did I mention there are GIVEAWAYS with EACH POST in this series??!! (Because authors are awesome!)

Today’s featured book is part of a 2-in-1 special edition from Love Inspired Suspense, and the author shares a riveting excerpt! 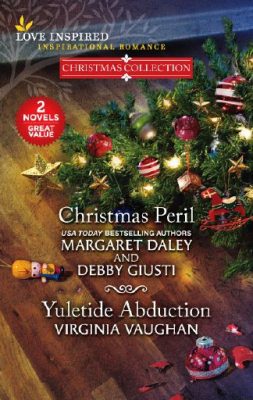 FBI agent Elise Richardson fears the worst when a Mississippi teen is abducted days before Christmas. But she won’t give up, especially when she learns she owes her life to the missing girl’s father. Years ago, former army ranger Josh Adams lost his brother when he died saving Elise. Though Josh resents her for the loss, she’s now his niece’s only hope. Working with the ex-soldier proves dangerous to Elise’s heart…and to her life when she closes in on what she fears is a human trafficking ring. If she’s right, Elise has only days to rescue Josh’s niece for a holiday homecoming—and to prove herself worthy of his love.

She should have brought her gun.

FBI Agent Elise Richardson slowed her jogging pace then stopped and knelt down, pretending to tie her shoelace. She glanced over her shoulder at the car that had been following her for three blocks. An older-model gray sedan with one occupant. She stood and stretched her arms and legs, casually scanning the early-morning downtown area. The buildings had been decorated for Christmas, but the streets were uninhabited at this time of day. Stores were locked up and secured. Only the street lamps lighted the sidewalk as her feet pumped against the pavement once again. And she was exposed without her gun and without her cell phone.

Who knew an early morning jog would necessitate weaponry?

She rounded a corner and found more of the same. Christmas adornment. Empty streets. Locked shops. No one in this sleepy town of Westhaven, Mississippi, was at work yet.

Except the guy in the car following her.

She kept her speed consistent but her legs and her lungs were already burning from the run. If she could circle the block perhaps she could make it to her hotel. She pushed through the pain and quickened her pace. The car matched her speed. She rounded another corner. The slow-moving car did the same.

She had no idea who was following her or what they wanted. Who even knew she was in town? She hadn’t checked in with the local police department yet since she’d arrived last night. She turned her head and glanced at the car again. Sunglasses and a hat hid his face, but he flinched as if realizing he’d been spotted. He gunned the engine. Elise took off running and this time the driver made no pretense. 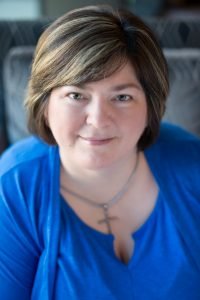 Virginia Vaughan is a Publishers Weekly bestselling author of inspirational romantic suspense. Blessed to come from a large, southern family, her fondest memories include listening to stories recounted by family and friends around the large dinner table. She was a lover of books even from a young age, devouring gothic romance novels and stories of romance, danger, and love. She soon started writing them herself. A former investigator for the State of Mississippi, Virginia utilizes her criminal justice background with her love of writing to transform words into powerful stories of romance and danger. 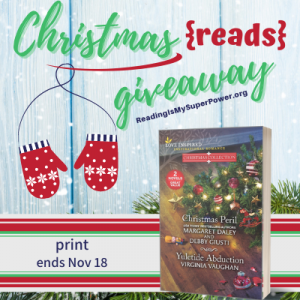 Virginia Vaughan is offering a print copy of this 2-in-1 collection, including Yuletide Abduction, to one of my readers! (US only. Void where prohibited by law or logistics.) This giveaway is subject to Reading Is My SuperPower’s giveaway policies which can be found here. Enter via the Rafflecopter form below.


What about you? What makes you want to read Yuletide Abduction by Virginia Vaughan?