Christmas is still 41 days away, though, so… snuggle in, grab your fave hot beverage and comfiest blanket, turn on some Christmas tunes and start your bookish Christmas list! Oh… and did I mention there are GIVEAWAYS with EACH POST in this series??!! (Because authors are awesome!)

Today’s featured book is a swoony friends-to-more romance set against the backdrop of an Alaskan Christmas! 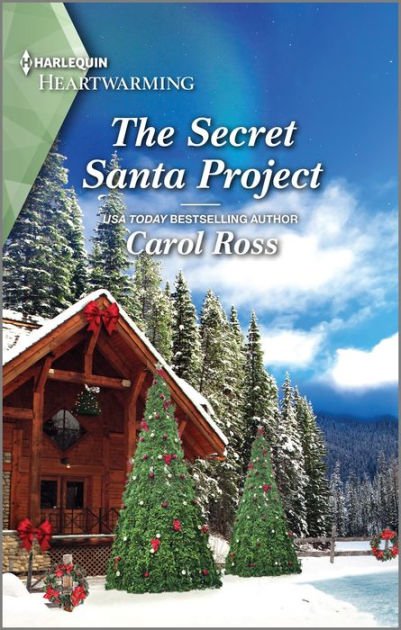 A gift he wasn’t expecting…

Working with his best friend’s sister isn’t how Cricket Blackburn had planned to spend his holidays. He’d tried to forget about sweet, beautiful Hazel James for ten whole years and now she’s back, closer to him than ever. They have a Christmas charity to run—certainly that will keep Cricket’s mind off what might have been. Perhaps if he tells Santa his secrets, his ultimate wish might come true.

SEVERAL COURSES INTO the holiday tasting menu and Cricket had yet to taste anything. The current ration before him consisted of a bite of steak, approximately twelve unidentifiable rice-like grains and several multicolored squiggles of sauce that seemed to serve no purpose beyond decorating the plate. Literally, he could scoop the entire portion up with a spoon and eat it in one, maybe two, bites. What was the point? Because just when he decided whether he liked it, it was all gone. They should call the ordeal a teasing instead of a tasting because his taste buds felt both harassed and cheated.

But palate confusion was not the problem.

Nope. The problem was sitting beside him and, by all appearances, having the time of her life. What had he done? How did you take back a job offer that you didn’t mean? He was still stunned she’d accepted.

“Oh, wow.” A reverent Kai, head bowed over his plate, loudly interrupted his musing, “This is the petite petite filet mignon. I was so hoping they would serve this. I’m just wondering how they do it.”

“And I can’t help wondering,” Cricket commented dryly, “where they found such a tiny breed of cows.”

Beside him, Iris belted out a laugh. The four of them were seated at one corner of the long bar, Kai and Hazel next to each other, and then Cricket and Iris along the adjacent edge.

“I love how subtle the coriander is,” Kai remarked about the next course, consisting of what appeared to be a single chicken nugget swimming in brown gravy. Politely, he asked, “Are you guys picking up on that at all?”

“I probably would have if I hadn’t accidentally swallowed mine whole,” he murmured.

“Cricket.” Hazel snickered quietly before covering her mouth with a napkin.

“I’m sorry, Cricket?” Kai said, placing a cupped hand to his ear. “I didn’t catch that.”

“He said yes,” Hazel answered for him. “It reminds him of a dish called the hallowed sole. Something he once had at a restaurant in Seattle.”

And this was how he spent two and a half hours of his life he’d never get back—seated between his best friend’s little sisters. On one side, there was Hazel, the woman he coveted and adored but could not have. Talking and laughing and enjoying the company of her date. On his other side, Iris was laughing and smiling and reminding him of everything he had to lose, one of the many relationships he would be risking if he ever acted on his attraction to Hazel.

Making matters worse, Hazel kept glancing his way, smiling, her greenish-brown eyes all glittery and joy-filled. All of this he had to endure while the memory of her hug lingered like warm honey. The softness of her arms holding him, the pressure of her fingers when they’d briefly landed on the back of his neck. The texture and heat of her skin as his hands touched her back. Traces of a coconut-laced tropical breeze when his nose grazed her hair. How she fit against his body… And this daydream, this recollection, these feelings were another part of the bigger problem.

She tossed him another sweet smile, this time holding eye contact as it landed right in the center of his chest. More potent than his fine whiskey, the warmth spread through him, leaving him a little giddy and longing for more. That was when he was struck by the fact that in the process of accidentally hiring her, he’d done this, too. Made her this happy. The sensation was both wonderful and terrifying. Because he could never take this away from her now, which meant he needed to figure out a way to live with what he’d done. 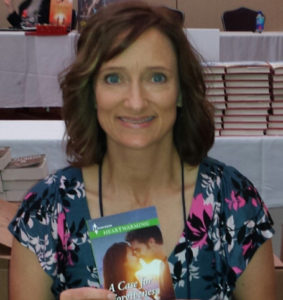 Carol Ross lives with her husband and two dogs (a perfect border collie and a perfectly loveable miscreant of a dachshund) in a small town in Washington near both the ocean and the mountains. She loves the Northwest because, when the temperamental weather cooperates, she enjoys hiking, running, skiing, and spending time outdoors. And when it doesn’t…she dons a raincoat, or gets lost in a book. She enjoys reading in many genres but writes about what she loves the most-romance. 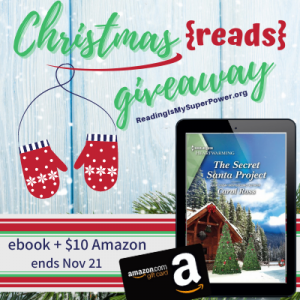 Carol Ross is offering an ebook of The Secret Santa Project and a $10 Amazon gift card to one of my readers! (Void where prohibited by law or logistics.) This giveaway is subject to Reading Is My SuperPower’s giveaway policies which can be found here. Enter via the Rafflecopter form below.


What about you? What makes you want to read The Secret Santa Project by Carol Ross?

34 responses to “It’s Beginning to Look a Lot Like Christmas (Reads) GIVEAWAY: The Secret Santa Project”