Christmas is still 40 days away, though, so… snuggle in, grab your fave hot beverage and comfiest blanket, turn on some Christmas tunes and start your bookish Christmas list! Oh… and did I mention there are GIVEAWAYS with EACH POST in this series??!! (Because authors are awesome!)

Today’s next featured book is a sweet Christmas romance with a gorgeous cover, plus the author shares an excerpt! 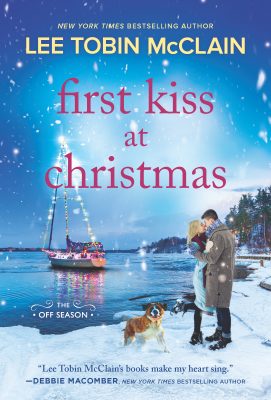 At 25 years old, preschool teacher Kayla Harris is embarrassed to admit she’s never been kissed. When Tony DiNunzio and his grieving nephew show up in her classroom, she can’t help being drawn to both of them. If only her insecurities-and his guilt over his sister’s death-would stop standing in their way.

As Christmas approaches, can these three come together to form a family… not just for the holidays, but forever?

Book 1: Cottage at the Beach
Book 2: Reunion at the Shore
Book 3: Christmas on the Coast
Book 4: Home to the Harbor

“Wait. Don’t call the police.” Tony DeNunzio struggled to his feet, the weight of his tense nephew making him awkward. “Everything’s okay. I’m his guardian.” He didn’t owe this woman an explanation, and it irritated him to have to give one, but he didn’t want Jax to get even more upset. The child hated cops, and with good reason.

“You’re his guardian?” The blonde, petite as she was, made him feel small as her eyes skimmed him up and down.

He glanced down at his clothes and winced. Lifted a hand to his bristly chin and winced again.

He hadn’t shaved since they’d arrived in town two days ago, and he’d grabbed these clothes from the heap of clean, but wrinkled laundry beside his bed. Not only because he was busy trying to get Jax settled, but because he couldn’t bring himself to care about folding laundry and shaving and most of the other tasks under the general heading of personal hygiene. A shower a day, and a bath for Jax, was about all he could manage. His brother and sister—his surviving sister—had scolded him about it, back home.

He couldn’t explain all of that, didn’t need to. It wasn’t this shivering stranger’s business. “Jax is going to enroll here,” he said.

“Really?” Another wave of shivers hit her, making her teeth chatter. Tony didn’t know where she’d come from, but apparently her mission of mercy had compelled her to run outside without her coat.

He’d offer her his, but he had a feeling she’d turn up her nose.

“The school is closed on Sundays,” she said.

Thank you, Miss Obvious. But given that he and Jax had slipped through a gap in the playground’s loosely chained gate, he guessed their presence merited a little more explanation. “I’m trying to get him used to the place before he starts school tomorrow. He has trouble with…” Tony glanced down at Jax, who’d stopped crying and stuck his thumb in his mouth, and a surge of love and frustration rose in him. “He has trouble with basically everything.”

The woman shook her head and put a finger to her lips, then pointed at the child.

What was that all about? And who was she, the parenting police? “Do you have a reason to be here?” he asked, hearing the truculence in his own voice and not caring.

She narrowed her eyes at him. “I work nearby,” she said. “Saw you here and got concerned, because the little guy seemed to be upset. For that matter, he still seems to be.”

No denying that. Jax had tensed up as soon as they’d approached the preschool playground, probably because it was similar to places where he’d had other bad experiences. Even though Jax had settled some, Tony could feel the tightness in his muscles, and he rubbed circles on his nephew’s back. “He’s been kicked out of preschool and day care before,” he explained. “This is kind of my last resort.”

She frowned. “You know he can hear you, right?”

“Of course he can hear, he’s not…” Tony trailed off as he realized what she meant. He shouldn’t say negative things about Jax in front of him.

She was right, but she’d also just met him and Jax. Was she really going to start telling him how to raise his nephew?

Of course, probably almost anyone in the world would be better at it than he was.

“Did you let the school know the particulars of his situation?” She leaned against the slide’s ladder, her face concerned.

Jax moved restlessly and looked up at him.

Tony set Jax on his feet and gestured toward the play structure. “Go ahead and climb. We’ll go back to the cottage before long.” He didn’t know much about being a parent, but one thing he’d learned in the past three months was that tiring a kid out with active play was a good idea.

Jax nodded and ran over to the playset. His tongue sticking out of one corner of his mouth, forehead wrinkled, he started to climb.

Tony looked back at the woman, who was watching him expectantly.

“What did you ask me?” Sometimes he worried about himself. It was hard to keep track of conversations, not that he had all that many of them lately. None, except with Jax, since they’d arrived in Pleasant Shores two days ago.

“I asked if you let the school know about his issues,” she said. “It might help them help him, if they know what they’re working with.”

“I didn’t tell them about the other schools,” he said. “I didn’t want to jinx this place, make them think he’s a bad kid, right from the get-go. He’s not.”

“I’m sure he isn’t,” she said. “He’s a real cutie. But still, you should be up front with his teachers and the principal.”

Normally he would have told her to mind her own business, but he was just too tired for a fight. “You’re probably right.” It was another area where he was failing Jax, he guessed. But he was doing the best he could. It wasn’t as if he’d had experience with any kids other than Jax. Even overseas, when the other soldiers had given out candy and made friends, he’d tended to terrify the little ones. Too big, too gruff, too used to giving orders.

“Telling the school the whole story will only help him,” she said, still studying Jax, her forehead creased.

He frowned at her. “Why would you care?”

Great. He felt his shoulders slump. Had he just ruined his nephew’s chances at this last-resort school? 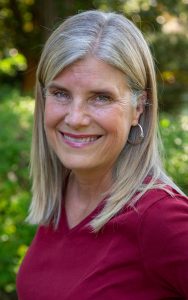 Lee Tobin McClain is the New York Times bestselling author of more than thirty novels. A professor-turned-writer, she finds inspiration in her beautiful and brilliant daughter, her goofy goldendoodle, and her aptly named cat, Trouble. Learn more about her books at www.leetobinmcclain.com. 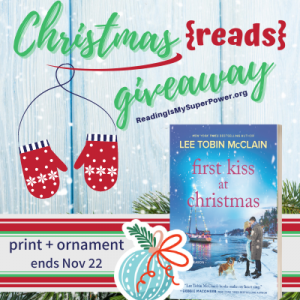 Lee Tobin McClain is offering a print copy of First Kiss at Christmas and a mistletoe ornament to one of my readers! (US only. Void where prohibited by law or logistics.) This giveaway is subject to Reading Is My SuperPower’s giveaway policies which can be found here. Enter via the Rafflecopter form below.


What about you? What makes you want to read First Kiss at Christmas by Lee Tobin McClain?

19 responses to “It’s Beginning to Look a Lot Like Christmas (Reads) GIVEAWAY: First Kiss at Christmas”