Christmas is still 40 days away, though, so… snuggle in, grab your fave hot beverage and comfiest blanket, turn on some Christmas tunes and start your bookish Christmas list! Oh… and did I mention there are GIVEAWAYS with EACH POST in this series??!! (Because authors are awesome!)

Today’s first featured book is a Christmas novella addition to a popular series about sisters, and author Beth K. Vogt shares an excerpt! 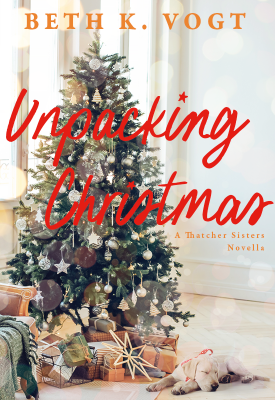 As Johanna, Jillian, and Payton look forward to celebrating the Christmas holidays with their families, they’re not prepared for an announcement that changes everything they’ve grown to love and cherish.

Their parents are selling their long-time family home. One change seems to lead to another, with Payton and Zach announcing their own decision to move, while Jillian and Geoff tackle the challenge of starting a family. The only ones maintaining the status quo are Johanna and Beckett—but romantic limbo is no place to be. Then their dad’s sudden health crisis spins life further out of control.

Instead of putting up holiday lights and decorating the family Christmas tree, the Thatcher sisters are helping pack up their childhood home. Along the way, they share treasured memories, try to hold onto valued traditions, discovering the struggles they’ve endured pale in comparison to the love they share with each other.

This Christmas, Johanna, Jillian, and Payton will laugh and cry together as they realize the true magic of Christmas isn’t found in gifts or decorations, but in the love of family.

Thanksgiving Day. Tradition demanded the day’s focus was on being grateful. And as both the wife and mom in the Thatcher family, I was. But throughout the day, in between remembering all the reasons I was thankful, the words, “Tell them,” replayed in my mind. Don and I needed to tell them while the family was all here together.

But announcing our news to Johanna and Jillian and Payton was more difficult than I’d expected. And so, it was back to being thankful. Again.

If someone asked me what one thing I was most thankful for today, I’d tell them it was the drama-free scene right here in my kitchen.

My daughters had been together from mid-morning to late afternoon, and there’d been no snark. No irritated looks tossed back and forth between the trio. No chilly silence. Johanna hadn’t hassled Payton about how many sugars she’d dumped into her cups of coffee. Jillian hadn’t needed to referee any verbal skirmishes between her sisters.

With our Thanksgiving meal finished, the kitchen was crowded, couples working to clear away the mess. Johanna and Beckett washed serving utensils and pots. Jillian and Geoff loaded the dishwasher. Payton and Zach put away leftovers.

The family scene was threaded through with laughter, punctuating the lack of tension as everyone worked together, instead of squaring off with one another because someone was annoyed, offended, or outright angry.

So many good memories were tucked inside this house. Some heartbreaking ones too.

And some of the best memories had been made in the last two years.

Johanna leaned close to Beckett as he whispered something in her ear, her platinum blonde hair pulled back in a low ponytail. She grinned, splashing a bit of soapy water in his face. He caught her closer with a playful growl, droplets of water clinging to his dark hair.

Those two. So obviously in love with one another—and still leaving us all guessing as to whether they’d ever get married or not after reconciling with one another after Ellison’s birth.

Johanna gave Beckett a quick kiss and stepped away from the sink, drying her hands on a dish towel. “I’d better check on Dad and Ellison.”

“I’m surprised how good your dog is with a rambunctious two-year-old.” Johanna folded the dish towel, laying it on the counter next to the drying pots and pans.

“Winnie would never hurt Ellison.” Jillian shut the dishwasher and turned it on, running her fingers through her short blonde hair—her chosen style now, no longer caused by cancer. The low hum became the mechanical background music in the kitchen. “And you and Beckett were both so patient, teaching Ellison to be gentle with him.”

“Except for that one episode.” Johanna grimaced. “Poor guy. All he did was whimper until we realized she had both fists wrapped around his eyebrows.”

Jillian’s eyes lit up as Johanna shared the memory. Laughter and happiness surrounded her most days. Such a change from two years ago. 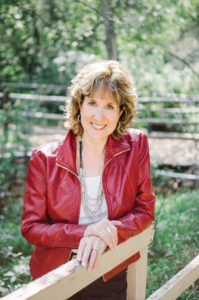 Beth K. Vogt believes God’s best often waits behind the doors marked “Never.” Having authored ten contemporary romance novels and novellas, The Best We’ve Been, the final book in Beth’s Thatcher Sisters Series with Tyndale House Publishers, released May 2020. Other books in the women’s fiction series include Things I Never Told You, which won the 2019 AWSA Award for Contemporary Novel of the Year, and Moments We Forget. Beth is a 2016 Christy Award winner, a 2016 ACFW Carol Award winner, and a 2015 RITA® finalist. An established magazine writer and former editor of the leadership magazine for MOPS International, Beth blogs for Learn How to Write a Novel and The Write Conversation and also enjoys speaking to writers group and mentoring other writers. Visit Beth at bethvogt.com. 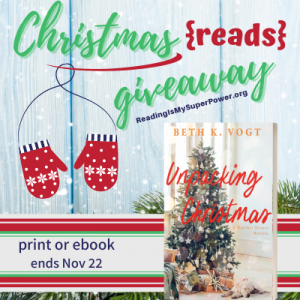 Beth K. Vogt is offering a copy of Unpacking Christmas to one of my readers! (Winner’s choice of print or ebook. US only for print. Void where prohibited by law or logistics.) This giveaway is subject to Reading Is My SuperPower’s giveaway policies which can be found here. Enter via the Rafflecopter form below.


What about you? What makes you want to read Unpacking Christmas by Beth K. Vogt?