Welcome to the Blog + Review Tour for Hidden Danger by Jerusha Agen, hosted by JustRead Publicity Tours! Keep reading for a riveting excerpt! 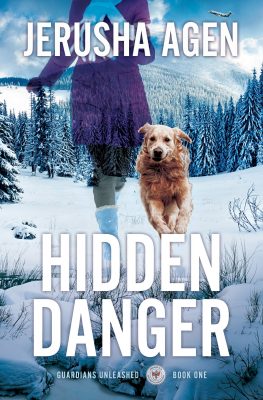 The greatest threat to this K-9 team is the one they don’t see coming.

Cora Isaksson’s guilt has shadowed her life ever since drugs ensnared her brother and he disappeared. When Bradley suddenly returns, Cora and her narcotics detection K-9 are thrust into a battle against the drug cartel that wants him back.

DEA Special Agent Kent Thomson has his own personal reasons for bringing justice to the cartel. Cora and her drug-sniffing K-9 will only get in his way. Or are they assets that will enable him to right the wrongs of the past?

When the cartel targets Cora, she and Kent join forces with her teammates at the Phoenix K-9 Security and Detection Agency to end the cartel before it ends her. They’re prepared for danger, but when more lives than their own hang in the balance, can they trust God for the rescue that’s out of their reach?

A bark popped from Jana’s mouth.

Cora started, her heart slamming her ribs. Jana never barked. Not since she’d grown into an adult and left puppy play-barking behind.

“Shh. It’s okay, girl.” Cora whispered the automatic comfort as she gave Jana a stroke, feeling a bit like a liar as her pulse sprinted with fear. Cora slid her feet out from under the covers and touched them to the floor. She lifted her cell phone from her nightstand and powered it on.

She should call Phoenix. Or the police.

Wait, it played a jingle when it turned on.

She quickly stuffed the phone under her pillow and pressed it tight over the device. The plush down muffled the cheery tune, hopefully enough that no one else could hear.

If someone was in the house.

The thought sent a tremor through her body.

But reason followed on its heels. She didn’t know there was an intruder. There had only been a noise, which was more likely Bradley wandering around downstairs than a home invader.

She wouldn’t call for help only to learn she’d let her imagination run away with her. She was likely overreacting because of the stress of the day and lack of sleep.

She stood and picked up the fleece robe she kept on the bench at the end of her bed. Pulling it on over her cotton pajama shirt and pants, she slowly went to the doorway.

Jana stayed beside her, the golden’s movements a soft brush on the carpeted floor. At least Jana seemed normal again, panting with a relaxed demeanor as she paused with Cora in the doorway. That was a good sign.

But why, then, did Cora’s pulse still pound in her ears?

She shook her head. She was going to feel so silly when Bradley came up those stairs, carrying a snack.

How could she have forgotten her state-of-the-art security system? She’d installed it herself. She must be more tired than she realized. She had just shown Bradley the alarm system last night, so he wouldn’t accidentally trigger it if he wanted to leave and could disarm it if he came home when she was gone during the day.

If any intruder tried to enter her house from the back door, front, or any of the windows, her security system would be triggered, and ear-deafening alarms would be sounding right now.

But the house was silent.

Not even another noise from downstairs.

Cora stepped out of her room, her bare feet sinking into the carpet as she moved toward the wall that hid the staircase from view.

She peered around the wall.

The gray-carpeted stairs were empty. The shadow of the railing cast an eerie outline on the wall.

A dark object darted past the stairs below.

She sucked in a breath, covering her mouth as she pulled back behind the wall.

A person. In dark clothing. In her house. 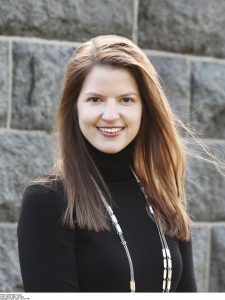 Jerusha Agen imagines danger around every corner but knows God is there, too. So naturally, she writes suspense infused with the hope of salvation in Jesus Christ. With a B.A. in English and a background in screenwriting, Jerusha is a speaker, writing instructor, and Fear Warrior who sounds the call to battle against fear in our everyday lives. Jerusha loves to hang out with her big furry dogs and little furry cats. You’ll often find her sharing irresistibly adorable photos of them in her newsletter and on social media. Get a free suspense story from Jerusha and find more of her thrilling, fear-fighting novels at www.JerushaAgen.com. 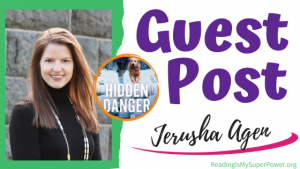 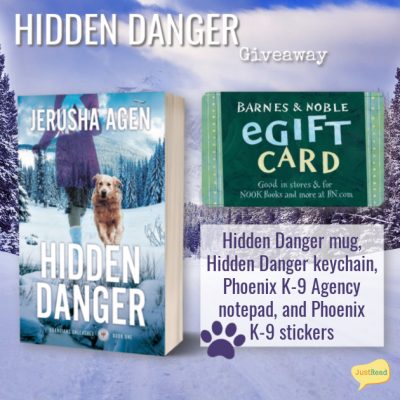 Be sure to check out each stop on the tour for more chances to win. Full tour schedule linked below. Giveaway began at midnight November 16, 2021 and lasts through 11:59 PM EST on November 23, 2021. Winner will be notified within 2 weeks of close of the giveaway and given 48 hours to respond or risk forfeiture of prize. US only. Void where prohibited by law or logistics.

What about you? What makes you want to read Hidden Danger by Jerusha Agen?

21 responses to “Book Spotlight (and a Giveaway!): Hidden Danger by Jerusha Agen”