Christmas is still 36 days away, though, so… snuggle in, grab your fave hot beverage and comfiest blanket, turn on some Christmas tunes and start your bookish Christmas list! Oh… and did I mention there are GIVEAWAYS with EACH POST in this series??!! (Because authors are awesome!)

Today’s final featured book first appeared in the Something Borrowed: Christmas Weddings Collection, and author Mikal Dawn shares how she was able to incorporate some of her God-given passions into this story! 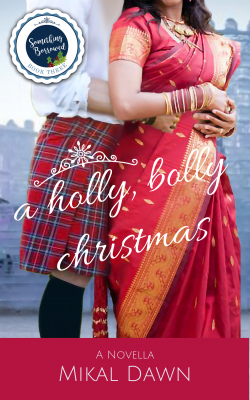 A dream wedding venue at Christmas? Sign Chahna Kapoor up. Even if her fiancé doesn’t know it…

Maguire Wilson only had one hesitation over proposing: he needed to do it face-to-face, which was hard when his girlfriend’s parents were constantly filming in India.

But then her Bollywood star parents come to town, bringing drama–and another man?–with them.

A Holly, Bolly Christmas first appeared in the Something Borrowed: Christmas Weddings Collection in 2020. Be sure to check out the interconnected stories from Jaycee Weaver, Toni Shiloh, Teresa Tysinger, and Andrea Boyd.

by Mikal Dawn, author of A Holly, Bolly Christmas

This probably explains my unbridled enthusiasm every time my writing friends bring up the subject of writing another Christmas novella collection, so when the idea of Something Borrowed was tossed around, I jumped at it. I’m not one of those writers who has a multitude of ideas simmering in their brains (unfortunately), but seeds do get planted, and God has given me certain passions (Christmas is just one of them!) that I really try to incorporate into my stories. And that’s how A Holly, Bolly Christmas was born.

Snow! Snow is a big passion of mine. Why? Because it’s fun, cold, and beautiful to look at, not to mention sweet to see kids outside—away from screens and with their friends and/or family—having fun being creative and playing, being kids. It reminds me of my childhood (not that I had a ton of snow growing up in Vancouver, but I had enough), so brings that nostalgic feeling. And gives me even more reason for coffee…not that I need a reason. 😉 When I was thinking of a setting for this story, the ICEHOTEL in Sweden was an immediate thought—what a perfect setting! And a dream location for me. When I mentioned it to The Girls (it’s our group message name that we keep going daily for me, Toni Shiloh, Andrea Boyd, Jaycee Weaver, and Teresa Tysinger), Toni didn’t think her character would be able to get there because she’s in a wheelchair. I couldn’t have that, and remembered the Hôtel de Glace in Quebec, a much easier location to get to, and just as beautiful! Voilà!

Next, of course, were my characters. Being a second-generation Canadian on my paternal side, I wanted to pay homage to my Scottish grandfather. That’s where you find Maguire, my ginger-bearded hero come into play from. But my heroine…she’s a different story.

Remember my comment on my passions? Growing up in Vancouver, I had the blessing of living in what was then nicknamed a “melting pot” of cultures. I loved it. God says in His Word that all the nations will be represented in Heaven, and while I by no means do it perfectly, I want to represent that in my stories. I’m thankfully seeing more and more diversity in Christian fiction but have also seen a lot of comments or reviews from readers that they “can’t relate” to characters of different ethnicities than themselves. I find that so sad. We’re all created in God’s image—how can we not relate to one another? It’s like saying one tooth can’t relate to another tooth because it’s on the top jaw rather than the bottom. We all have different stories, different experiences, different cultures—but isn’t that true even within the same colour of skin? I’m white and so is Carrie, but I was raised in Canada on the west coast while she was raised in Illinois. I was raised in several different denominations while Carrie was raised in a different denomination and is a member where she is. We’re both so different yet we can relate to one another, and I can guarantee it isn’t because we’re both white. It’s my goal to be one of (prayerfully!!) many authors who bring diversity into their writing and normalize it. This is how Chahna was born, as a nod to those friends I grew up with—I pray I wrote nothing that offended—and to write a story that was true to the world we live in: a world full of colour, beauty, that represents our Lord and His image.

And who doesn’t love a wedding full of flowers inside an ice hotel at Christmas? 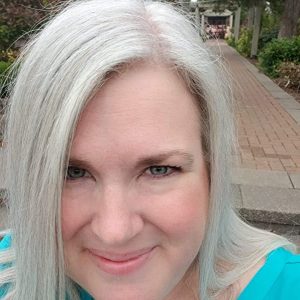 Mikal Dawn is an inspirational romance author, wedding enthusiast and proud military (retired) wife. By day she works for an international sports ministry, and by night she mutters to imaginary friends, performs sketchy Google searches, and procrastinates (like any good writer!). When she isn’t writing about faith, fun, and forever, she is obsessively scouring Pinterest (with coffee in hand, of course!) for wedding ideas for her characters.

Born and raised just outside of Vancouver, Canada, Mikal has lived throughout the southern United States, currently residing in Oklahoma with her husband, two of her three kids (though one is a neighbour!), one ferocious feline and one crazy puppy–and a blue betta fish! 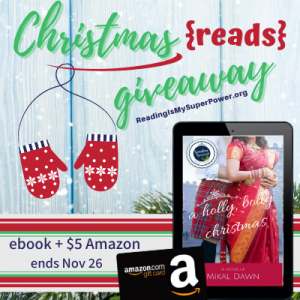 Mikal Dawn is offering an ebook copy of A Holly, Bolly Christmas and a $5 Amazon gift card to one of my readers! (Void where prohibited by law or logistics.) This giveaway is subject to Reading Is My SuperPower’s giveaway policies which can be found here. Enter via the Rafflecopter form below.


What about you? What makes you want to read A Holly, Bolly Christmas by Mikal Dawn? Would you stay at an ice hotel? (I totally would!)