Happy Sunday! As you doubt know by now, we are continuing our annual blog series spotlighting (over 60 this year) new and recently-released Christmas reads! Christmas is only 20 days away, so… snuggle in, grab your fave hot beverage and comfiest blanket, turn on some Christmas tunes and continue your bookish Christmas list! Oh… and did I mention there are GIVEAWAYS with EACH POST in this series??!! (Because authors are awesome!) 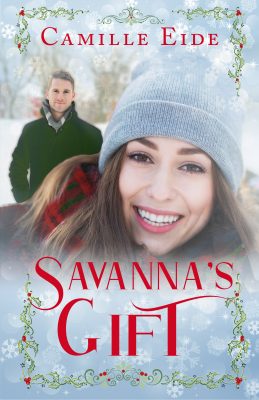 
Savanna’s Gift (revised & updated) is an inspirational Christmas romance about lost love and the gift of second chances, set in an elegantly adorned, rustic ski lodge in the Oregon Cascades.

While delivering her god-daughter to the ski lodge where she once worked, Savanna Holt is reminded of one special Christmas and how ambition led her to make the worst mistake of her life: breaking up with Luke Nelson.

Dropping off her best friend’s child is one thing, but leaving the mountain is another. A winter storm traps Savanna at the ski lodge with the man whose heart she broke four years ago. Stunned to discover Luke never left, but worked his way up from lift operator to manager, Savanna sees her snowbound predicament as an opportunity, a gift. But Luke has worked hard to get past his hurt and intends to steer clear of the woman with the breathtaking smile who chose ambition over love.

Can Savanna convince Luke that she’s changed? And when her dream job beckons, forcing her to choose between two priceless gifts, will she sacrifice her dream, or a second chance at love?

Get it directly from the author’s store!

Savanna had stepped into a magical winter wonderland. Though she’d expected beauty, her breath still caught at the sights before her. Thousands of little white lights twinkled everywhere—in corners, along the thick wooden beams, and draped overhead, bathing the lobby in a soft, charming glow. Lighted evergreen garland adorned the log walls in an elegant swag pattern. The fragrance of fresh cut fir and cinnamon-scented pinecones and dried fruit wreaths filled the air. The tall stone fireplace in the center of the lobby housed a roaring fire, filling the lodge with the sweet, musky aroma of hardwood smoke. Two long sideboards along the far wall were loaded with peppermint bark and truffles and iced gingerbread snowmen and spiced cider. Strains of Celtic carols wove in and out of sparkling conversations as guests mingled and sipped and reveled in the warmth and magic of Christmas.

Savanna followed Mylie’s gaze to a twenty-foot tall tree in the adjacent Fireside Room. Dazzling colored lights and stars and glass ornaments covered the tree from top to bottom. Shiny wrapped packages spilled from beneath the tree in every direction. Another fireplace crackled with a cheery, inviting glow.

But heat from the fire wasn’t the only thing warming Savanna’s cheeks as she recognized the spot where, four years ago, she had settled into Luke’s embrace and agreed to be his wife under the glow of a similar Christmas tree. She remembered every word of his proposal, his reminder that he hated speeches but would gladly shout from the mountaintop that he was the luckiest man alive if she’d marry him. Her face burned at the memory of telling him there was nothing she could ever want more than being married to him, and of the emotion on his face and the feel of his lips on hers—

“Thank you,” a deep voice said.

With a jolt, Savanna turned. A broad-shouldered man in a dark green resort shirt and khaki slacks had crouched to Mylie’s level and was asking if she’d gotten a snowman cookie. His calm, quiet voice sent tremors through Savanna, raising goose bumps along her arms.

Smiling, the man straightened to full height and faced Savanna. In the dim, enchanting glow, he looked like—

No. It was a trick of ambient lighting. An overdose from all that daydreaming. It was—

Heart battering her ribs, all she could do was stare. And remind herself to breathe. Though his shoulders filled out his shirt a little more thoroughly than she remembered, it was Luke—no doubt about that. He had the same tanned face and strong jaw—a jaw now cleanly shaven instead of the three-day scruff he used to wear, not because he was trying to be trendy, but because he’d always roll out of bed and hit the slopes without thinking to shave. Those same long-lashed, green eyes. And the same warm, amused smile, which was now vanishing as recognition dawned on his face.

Luke seemed just as stunned as she was, and for a moment, he did nothing but stare at her. “Savanna?” He spoke in a hushed tone, like it was nuts to be saying her name out loud. “I almost didn’t … your hair is longer. Darker.”

“Yeah … I was going for festive. It’s called Roasted Chestnut.”

Awesome. Straight from the book ‘Fascinating Things to Say When Bumping Into Your Ex-fiancé.’ 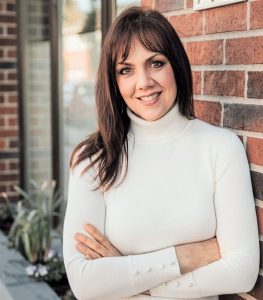 Camille writes tales of love that readers call ‘more than a romance.’ Her books include both contemporary and historical, and are seasoned with hope, faith, and truckloads of grace.

She’s a native Oregonian, wife, mom, grammy, church administrator, and a fan of muscle cars, waterfalls, and tender romance. She claims to have a PhD in Learning Things The Hard Way, which fuels her obsession to blog about the amazing love and grace of God at Along the Banks.

Savanna’s Gift is offering a print or ebook copy of Savanna’s Gift to one of my readers! (US only for print. Ebook open internationally too. Void where prohibited by law or logistics.) This giveaway is subject to Reading Is My SuperPower’s giveaway policies which can be found here. Enter via the Rafflecopter form below.


What about you? What makes you want to read Savanna’s Gift by Camille Eide?