Happy Thursday once again! Even though Christmas is over, I still think it counts until New Year’s Day, so I am continuing our annual blog series spotlighting (over 60 this year) new and recently-released Christmas reads! So… snuggle in, grab your fave hot beverage and comfiest blanket, turn on some Christmas tunes if you aren’t sick of them yet and continue your bookish Christmas list! Oh… and did I mention there are GIVEAWAYS with EACH POST in this series??!! (Because authors are awesome!)

Today’s next featured book is a twist on You’ve Got Mail (yay!), and author Michelle Sass Aleckson shares an excerpt! 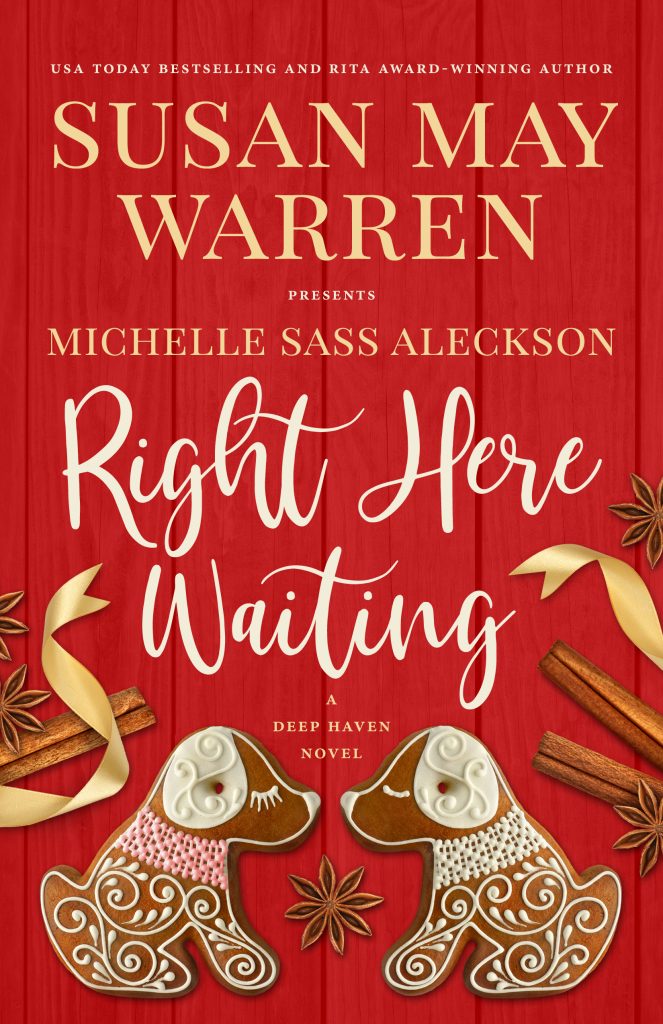 He lives in a world of winter.

Sled dog musher and outdoor adventurer Nick Dahlquist doesn’t mean to be a loner—he just feels at home in the woods, with his dogs, and also online in his vlogging world, where he’s amassed nearly a million viewers. But he’s just a simple guy, with simple goals—care for his dogs, teach people how to survive the cold, and run the Iditarod. Unfortunately, life turns cold when his lead dog is injured, and he’s low on funds. Good thing he has LadyJHawk to chat with. She’s become an online friend he can turn to, and he’s starting to need her more than he’d like to admit. But the last thing he wants is for some random woman to show up on his doorstep…

She doesn’t belong in his world.

Chopper pilot and Texas gal Jae Lynn Washington has been following Nick’s DogQuest videos and Get Lost in the Woods vlogs since she inherited her deceased boyfriend’s military working dog. Three years later, his encouragement and help as online chat buddies have made her wonder if he could be more than a friend. What if she moved to Deep Haven? Would that be considered stalking, even if she had a bonafide job on the Crisis Response Team?

But she’s determined to try…

When Jae shows up in Deep Haven—and on Nick’s doorstep—he’s not at all the man she met online. The last thing she’ll do is tell him she’s really LadyJHawk. And when Nick is tapped to train the Crisis Response Team, he’s pretty sure that petite, summer-loving Jae won’t last a moment in the brutal cold—a fear he pours out to LadyJHawk. As their training takes a personal turn, their chilly start begins to thaw. But is he ready to shake off his online relationship for the one in real life? And if Jae tells him the truth, will it spook him back into the woods? When a blizzard strikes, and the CRT is called out into the storm, it might be too late…

Cozy up to this delightful, wintery twist on You’ve Got Mail set in the snowy escape of Deep Haven.

The winding dirt road climbed farther up the forested incline while the late morning sun played hide and seek with the clouds and tree branches overhead. Stark white birch branches waved high above the hood of Jae’s Subaru while stately evergreens stood tall and resolute on the hillside.

Jae checked the navigation on her panel with a glance. Nick’s vlog, Get Lost in the Woods, wasn’t too far off. It certainly wouldn’t be hard to do out here.

Everything surrounding her sang of fresh air and beauty—the perfect place to start a new adventure.

Jae’s phone rang through the Bluetooth speaker, interrupting her reverie.

“How’s my Sugar-Blossom doing?” Her father’s Texas twang came through the speaker loud and clear. “Did ya make it to Minnesoooota yet?”

She laughed at his awful attempt at the Minnesotan accent. She could picture him standing on her grandparents’ front porch, leaning against the post and sipping a dark Italian roast coffee out of an enamel mug. His gray-streaked brown hair would be hidden beneath his favorite black Stetson, his plaid shirt tucked neatly into his Levi’s and his cowboy boots caked with dust and dirt.

“And how is it? Did you meet Ronnie and Cole?”

“I tell ya, those two got more guts than you could hang on a fence. I’m glad they can watch over you.”

“Daddy, I can take care of myself. I don’t need watchin’.” And there went her own non-twangy accent she’d worked so hard to cultivate. She rolled her eyes at her own slip. “So, how’s Omma?”

“Your mama is just fine. Happens to be right here next to me making me the most blessed man in the great state of Texas. Mimi and Pap are in town picking up a few things.” His voice became muffled. “What’s that? … Yeah. … I’ll ask her.”

“Darlin’, your mama wants to know if you’ll be down here for Thanksgiving.”

“I wish I could, but I won’t have any vacation time yet. I’ll see what I can do to get down there before you go back overseas.”

“Maybe Christmas we can fly up there. Sure do miss ya, darlin’.”

“I miss you too, Daddy. I think you’ll like it up here if you come visit. Lots of forest and hills. And Lake Superior is incredible.” A glance out her driver’s side window showed a break in the trees. The sapphire lake horizon stretched wide, as far as she could see.

“Doesn’t it get mighty cold up there? I’m still surprised you’re trading the blue Texas skies for the frozen tundra.”

“The cold isn’t too bad.” When she didn’t think about it. Yes, she’d had to don her sweatshirt and bathrobe as well as her thickest socks before she could fall asleep last night, but the headquarters building was so big. Surely once she found a small, cozy apartment, she’d be fine. Besides, though people might try to treat her like one because of her size, she was no delicate flower. “Texas was okay for a while, but…I need to find my own place, Daddy. And I think this is it.”

“I get you have to find your place, but did you have to sell everything? You could’ve kept your furniture in storage or paid rent on your apartment another month or two until you were certain it would work. Or taken a leave of absence instead of quittin’ your job.”

Jae remembered Nick’s video he’d posted the day she was offered the Deep Haven job, his direct gaze coming through her screen as he’d pointed to the camera and spoken. “If you’re going to do something in life, don’t do it halfway. Give it everything. Don’t leave yourself an escape. Burn the ships and move on with the conviction that your only way through is to move forward.”

She’d heard that and she’d known. She had to do this. 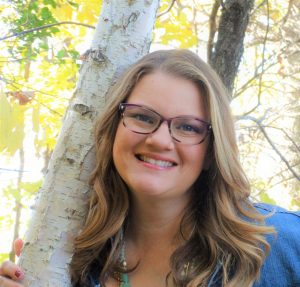 Michelle Sass Aleckson lives the country life in central Minnesota with her own hero and their four kids. She loves rocking out to 80’s music on a Saturday night and getting lost in good stories-especially stories that shine grace. And if you’re wondering, yes, Sass is her maiden name. Visit Michelle at www.michellealeckson.com.

Susan May Warren is the USA Today best-selling novelist of 80 books. With more than 1.5 million books in print, she is beloved by reviewers and readers around the world. Visit Susan at www.susanmaywarren.com. 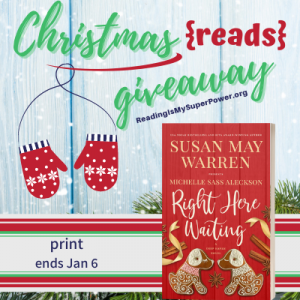 Michelle Sass Aleckson is offering a print copy of Right Here Waiting to one of my readers! (US only. Void where prohibited by law or logistics.) This giveaway is subject to Reading Is My SuperPower’s giveaway policies which can be found here. Enter via the Rafflecopter form below.


What about you? What makes you want to read Right Here Waiting by Michelle Sass Aleckson?