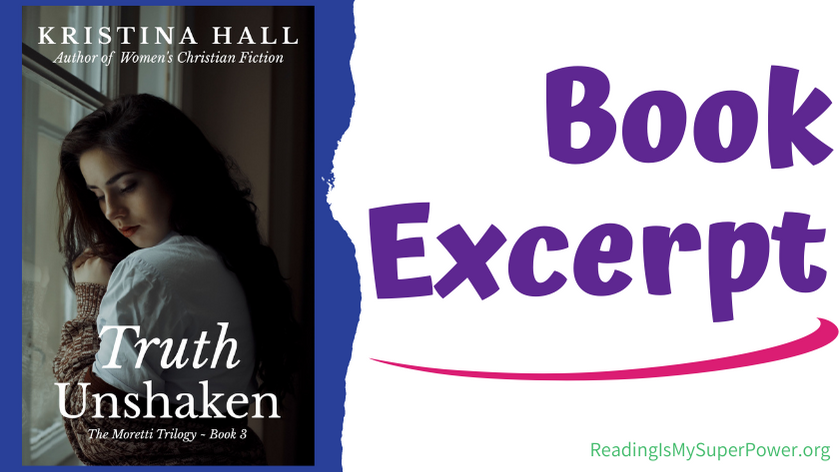 I’m delighted today to give you a peek inside Truth Unshaken by Kristina Hall, the final book in her Moretti Trilogy! 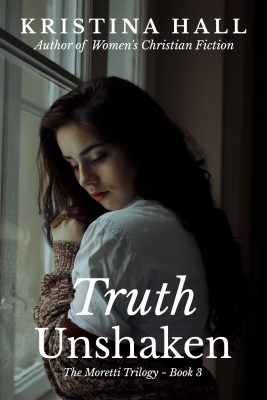 Whom can they trust?

After losing her parents, Carla Belardi discovers her life was a lie. Now, she must flee unless she wants her parents’ fate to be her own.

Frank Ashton lost the use of his legs—and his desire to live—in the Great War. When Carla is brought to his home injured, he gains a friend. But despite the attraction growing between them, he can never burden her with a cripple.

Alberto Moretti thought he could do good working for the Prohibition Unit—until he finds out his new employer isn’t much better than the criminals he once served. Now, he has to fight both sides—the Prohibition Unit and the crooked Belardis.

When danger surrounds Carla, Frank, and Alberto from too many angles, will they put their trust in the Truth that will never be shaken?

Carla Belardi ran her thumb along the novel’s spine. If she kept her movements slow and steady, the numbness would hold her fast. The images would stay buried.

The two caskets at the front of the church. The line of black-clad mourners who’d filed past her.

She drew her hand from the book and clenched her black skirt. Nothing would bring Mamma and Papà back. Just as nothing had stopped that motorcar from hitting their Packard and pushing it into the river.

She closed her gritty eyes.

She opened her eyes and set the book on the little table beside her chair. The aging housekeeper stood in the doorway, hands knotted at her waist, eyes rimmed in red.

Evening shadows draped the library, dulled the oak shelves, and washed out the velvet curtains. Cold slipped in, undeterred by the flames flickering in the fireplace.

“Yes?” She lowered her head. The compassion on Mrs. Pasetti’s round face would shatter the last of her composure.

“Dario and Emilio are here to see you. I know it’s not the best timing, but they insist it’s important.”

They’d been at the funeral. Strangers more than cousins.

She dabbed her eyes and blew her nose. “It’s all right. I’ll see them.”

“I’ll have them come in.” Mrs. Pasetti slipped from the doorway.

The grandfather clock beside the door ticked away the seconds. Footsteps creaked down the hall.

She lifted her head.

Emilio and Dario filed into the library and stopped a couple of yards from the wingback chair she occupied.

She motioned to the sofa pressed against the only wall not occupied by bookshelves. “Take a seat if you’d like.” She swallowed to clear the reediness from her voice. “And thank you … thank you for coming this morning.”

Dario lowered himself to the sofa, while Emilio remained standing. Emilio crossed his arms and pinned her with a steady stare.

She clasped her hands in her lap. Why had they come?

He took a slow step forward, his bulky shoulders stretching his coat. “I’m aware your parents kept much from you.”

He’d come to tell sordid lies? “They kept nothing from me.”

Emilio shook his head. “Then tell me what you know of them, Gian in particular. What kind of work did he do?”

Nausea stirred her stomach. Why would they question Papà’s work?

“He managed a restaurant. You know that.”

Emilio glanced at Dario. “Sure, we know that. Same as we know he operated eleven speakeasies throughout the city.”

Speakeasies? Papà had never touched a drop of liquor. “You’re … lying.” He had to be.

Emilio’s lips twisted. “He ran his restaurant all right. During the day. But at night, he ran a club out of the basement. Real nice. And he had ten others like it.”

Emilio gestured around the room. “You think he made enough running that restaurant to put you and your mother up in this big house? You think he was raking in enough to afford four new Packards?”

The room descended into swirling reds and browns. “He … was doing … well.”

“How’d he explain taking a bullet to the shoulder? He say it was a robbery?”

“Here. Look at this. Tell me he’s as innocent as you think.”

Paper pressed against her fingers, and she blinked to clear her vision. Papà stood against a concrete wall, face blank, his name written in white above his head. A mugshot.

“What’d he tell you about that time he was gone unexpectedly for a week? That he had to take a business trip?” He motioned to the picture. “Well, that’s where he was.”

Jail. Papà had been in jail. The picture fell from her limp fingers and fluttered to the floor.

Her throat closed, and black edged the library. “No. Please, no.”

Emilio laughed, the sound muffled. “You’re part of our family. And as part of that family, you will be loyal.”

“You will be loyal unless you want to end up like them.”

The wreck hadn’t been—

She lurched from the chair and hurled herself at Emilio. Slammed her fists against his chest, into his stomach.

He’d killed them. Murdered them.

Iron fingers clamped around her wrists, threw her back. His palm stung her cheek, snapped her head to the side.

The seat of the chair drove into her calves, and she collapsed into it. Black fell over her.

And cold metal pressed to her forehead.

“You’re wondering why?” Emilio gave a sharp laugh. “Gian decided he’d rather give his loyalty to the government. He was feeding them information for close to a year before we found out.” His voice dropped low. “But not before they arrested four of our men and killed three others.”

The gun pressed harder to her forehead, and she jammed her shoulders against the back of the chair.

“Unless you want to end up like them, you will be loyal. Your grandfather will take you in, give you everything you ever wanted.”

Mamma and Papà murdered. Papà a government agent. Her life nothing but a lie.

The gun dug into her skin. “Do we have your loyalty, or do you want to die like your parents? And don’t think you can run to the cops. We’ve got our sources there too.”

“You have … my loyalty.” A lie. Just as her life was nothing but a lie.


Other Books in This Series 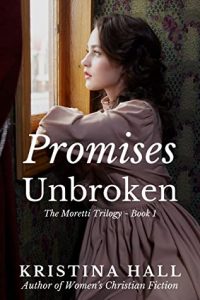 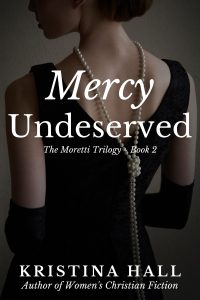 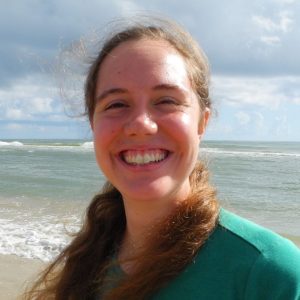 Kristina Hall is a sinner saved by grace who seeks to glorify God with her words. She is a homeschool graduate and holds a degree in accounting. When she’s not writing, she enjoys reading, arm wrestling, lifting weights, and playing the violin.

What about you? What makes you want to read Truth Unshaken by Kristina Hall?

7 responses to “Book Spotlight (and an Excerpt!): Truth Unshaken by Kristina Hall”