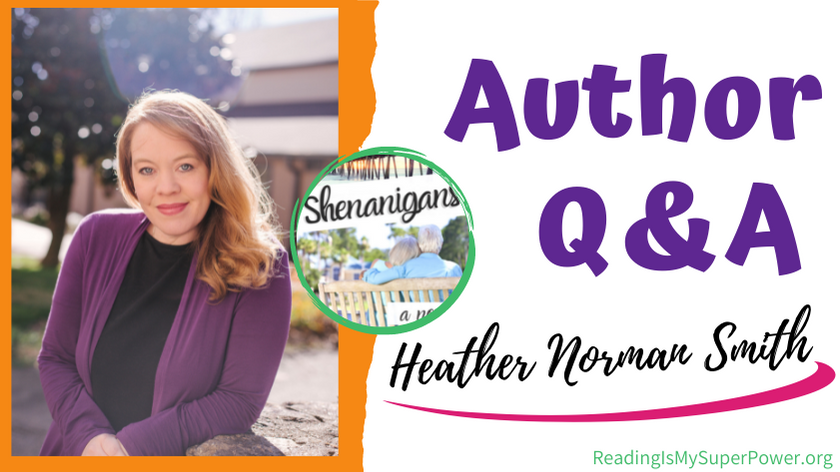 Happy April Fools’ Day! What better day to chat with Heather Norman Smith about Shenanigans – a story about an octogenarian who loves a good prank? Shenanigans turns two today, and we’re celebrating 🙂 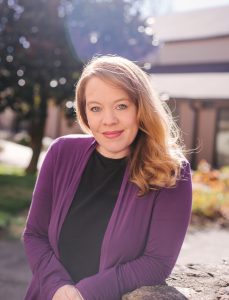 Heather Norman Smith is a Christian Fiction and devotions author. Her goal is to use the written word to entertain and encourage while illuminating the redemptive love of God. She is proud to be a life-long North Carolinian and aims to present the beauty of the Tar Heel State in her fiction. Her home is just outside Winston-Salem, NC, where she lives with her husband, their four children, and several pets. Along with writing and spending time with family, Heather also enjoys singing about Jesus. 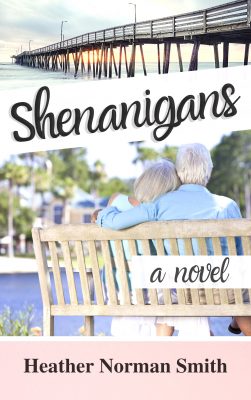 You’re never too old for fun, faith, or love.

Lavinia Lewis is a wealthy southern widow who enjoys a good prank. But when a resident at her posh retirement community in Southport, North Carolina gets sick at a potluck, Lavinia’s reputation as a jokester lands her in big trouble. How can she clear her name when her own daughter doesn’t believe she’s innocent?

Neville McGrath is a long-in-the-tooth lawyer, afraid of being put out to pasture. Torn between his nephew’s offer to move to Maine to live with him and his desire to keep working, Neville discovers other options when he takes Lavinia’s case.

The jokes keep her young, but Lavinia remembers the true source of joy as she faces criminal charges. Can she help Neville find his faith for the first time, and can they both find love at eighty years old?

A humorous and inspirational story with lovable characters, a beautiful setting, fun mystery, sweet romance, family drama, and an ending that will leave you sighing in satisfaction.

Hi Heather! Welcome back to the blog!

Heather: Both! I have two dogs, Rico and Maggie, and one spoiled kitty named Daisy.

Carrie: awww – pets are the best ♥

Heather: Over-it’s the only way.


Carrie: that’s what i’ve learned since starting to ask this question haha


Carrie: I was with you until Diet Pepsi came into the equation haha #yuck 😛

Heather: Board game, because there’s more of those that my kids like to play.


Carrie: We love board games here too!


Heather: Where the Last Rose Blooms by Ashley Clark and a soon-to-be-released book written by my dad, Bobby W. Norman. It’s titled In the Days When Judges Ruled: Stories of the Great Deliverers of Israel.


Heather: That I don’t clean out my purse often enough! And that I’m a mom. Kid drawings, and snacks to help keep them quiet during church, would be clues.


Q: What surprised you about Shenanigans or your characters as you wrote their story?


Heather: There is much more romance than I imagined when I started writing. Though it’s not the primary focus of the story, the sweet relationship of two octogenarians was an irresistible thread.


Q: Did you have the whole plot outlined before you started writing Shenanigans, or did you let the characters dictate what came next?


Heather: The characters definitely told this story. It started with the title, Shenanigans, when my husband told a joke about my mom, whom my children call “Nana.” We laughed about her being up to she-NANA-gans, then I started imagining a prank-playing grandmother who finds herself in trouble. But the main character, Lavinia Lewis, had to help me figure out just how an innocent joke could get her arrested and kicked out of her fancy retirement community!


Carrie: haha! In my family, we try to keep my mom from doing things she really shouldn’t be doing ‘at her age’ (like cartwheels, Lord have mercy). So our new thing is “If this could become a shenanigan, don’t do it!” Sounds like maybe Lavinia needed that advice too lol


Q: What do you most want readers to take away from Shenanigans?

Heather: The tag line is, “You’re never too old for fun, faith, or love.” I think that’s an important message, but it’s the faith element that I hope most encourages people of any age. Even though it’s a humorous story, I want it to remind readers that trusting in the Lord is the most important thing any of us can do.

Heather: I’m excited that my most recent release, New Wine Transportation Company, is a Selah award finalist, and I’m looking forward to attending the Blue Ridge Mountains Christian Writers Conference in late May, early June, where the winners will be announced.

After that, I’ll be busy spreading the word about my next novel which releases March 2023 with Iron Stream Media. It’s a dual-timeline, Southern/Women’s Fiction tentatively titled Songs for a Sunday, and it’s very dear to my heart.

I’m also writing two books concurrently, so I’m interested to see which one will start pulling more of my attention and be finished first. Will it be the third book in the Springville Stories series or the next dual-timeline novel? It’s a toss-up.

interested in reviewing New Wine Transportation Company by Heather Norman Smith?
willing to post your reviews to Goodreads & a retail site by June 16? 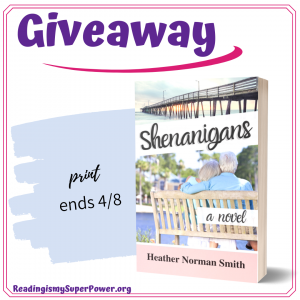 Heather Norman Smith is offering a print copy of Shenanigans to one of my readers! (US only. Void where prohibited by law or logistics.) This giveaway is subject to Reading Is My SuperPower’s giveaway policies which can be found here. Enter via the Rafflecopter form below.


What about you? What makes you want to read Shenanigans by Heather Norman Smith? What’s the best April Fools’ prank you’ve experienced?