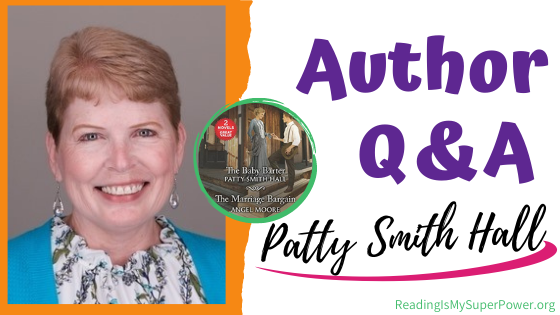 Please join me in welcoming Patty Smith Hall to the blog today to talk about her books & to give two of you a chance to win a two-in-one special release of Patty’s The Baby Barter and Angel Moore’s The Marriage Bargain from Love Inspired Historical! 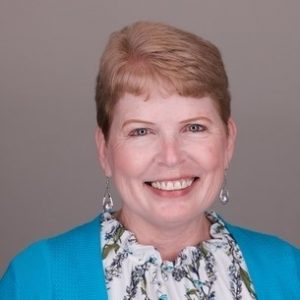 Multi-published author Patty Smith Hall lives near the North Georgia Mountains with her husband, Danny, her two daughters, her son-in-law and her grandboys.  When she’s not writing on her back porch, she’s spending time with her family or playing with her grandsons. 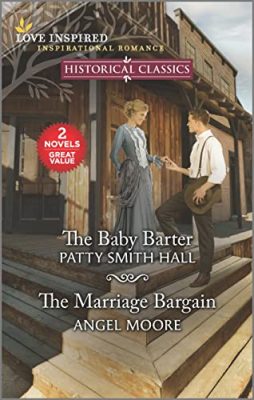 Sheriff Mack Worthington isn’t sure army nurse Thea Miller—whose actions once hurt him badly—is committed to raising her late sister’s baby. And a judge may never approve a single-parent adoption for either of them. But what if they got married? It would be a marriage in name only. Could their pretend family become the real one they’ve both been longing for?

The Marriage Bargain by Angel Moore

Lily Warren’s new hat shop is her ticket to self-reliance. But when her landlord, Edward Stone, bursts into her rooms to rescue her from a fire, Lily’s reputation is tarnished. With an orphaned niece who needs a mother, Edward believes a marriage of convenience is the answer to his and Lily’s problems. Until he develops feelings for his new wife…

Hi Patty! Welcome to the blog!

Patty: Summer—Before I lived in Michigan, I would have given a different answer, but I spent seven years living under a perma-cloud from September to April, I quickly grew to love summer. Even after returning to Georgia with all its heat and humidity, you can still find me outside on my back deck from mid-April to October.

Carrie: I do prefer the sunshine but living up north in Illinois had the exact opposite effect on me when it comes to Georgia summers – I hibernate from April to October and venture out in the late fall & winter lol.

Patty: Audiobooks—I have an hour and a half drive to my mom’s house every week, so I like to listen to books as I go. That or writing podcasts.


Carrie: driving a decent distance is about the only time I can listen to audiobooks – otherwise i get too distracted & realize I’ve missed half the book and have no idea what’s going on lol

Patty: I live near Atlanta—what do you think! LOL! I’m a Coke girl all the way. Funny story—one time I was on Long Island, and I was looking for a Coke machine at our hotel. I couldn’t find one so I went to the front desk and ask where I might find a Coke. Well, he thought I meant coke as in cocaine and threatened to kick me and the group I was traveling with out of the place (I was with 15 kids under the age of 13 and 7 chaperones.) It took a lot of talking and a visit to the vending machines to convince him I just wanted a soft drink!

Patty: Either, though I must take breaks from ebooks sometimes because my eyes get tired.


Carrie: I read almost exclusively on ebook now (because I can enlarge the print to avoid tiring my eyes) but I still have to own the print books so I can smile at them periodically 😛

Patty: If I were a superhero, I’d be Frugal Woman! I can sniff out a deal like no one else. For example, we recently had a leaky pipe in our half-bathroom. A plumber looked at it and said it would cost $600 to replace a brand-new sink. I told my dad about it and he thought it was an easy fix—all I needed was a $6 replacement from Home Depot. I bought the part, went home, and installed it. It hasn’t leaked since, and I saved us $594!


Patty: Jo March from Little Women. I think every writer identifies with Jo to a point.  She’s passionate, a bit odd yet completely loveable. For me, I identified with Jo’s frank honesty and her loyalty to her family. People who know me know not to ask for my opinion if you don’t want me to be completely honest!


Carrie: i always loved Jo too! (and I’m still upset that she didn’t wind up with Laurie haha)


Patty: I write all my first drafts longhand—I’m a terrible typist (I flirted with the boy sitting next to me in typing class rather than practiced!)  I use Vera Bradley notebooks (I get them cheap at the outlet mall!) Each page holds just at 500 words, so I know about how much I’ve written at the end of the day.  And I’m a pen fanatic! After I finish the first draft, I dictate it into my computer and do an edit. This is also the time I make my writing ‘pretty’—that means I dig into the emotional and spiritual parts of the story and flesh it out more. By the end of the third edit, it’s ready for my editor.


Q: Some authors like to hide little things in their stories. Is there anything you have hidden in your books?


Patty: All of my books have some references to my family or friends, or the places I grew up. In my first book, Hearts in Flight, one of my character’s back story was about how her father threw her husband into jail after they’d ran off and got married. This is a true story—my great-grandfather sat in the county jail for three days after he married my great- grandmother because she was too afraid to tell her father what she’d done. There is a happy ending to this story—my great grandparents were married for 79 years!

Carrie: awww what a great legacy ♥


Patty: I want my readers to see characters who have problems but can face them in light of their faith in God. As Christians, we’re held to a higher standard. People are always watching to see how we react when life throws us a curve ball. I want my characters to be a shining light for Christ even when their problems are overwhelming and without all that preachiness that some use because most of us don’t go around talking that way.

Patty: I have two books coming out this fall. First, I have a novella collection with three very talented writers called Christmas at the Five and Dime.  Then in December, On My Honor, my novel about a Girl Scout Leader and her troop protecting their Outer Bank home from Germany invasion during the Battle of the Atlantic, debuts. I’m really excited about this one! I’ve been dreaming of writing it for years! 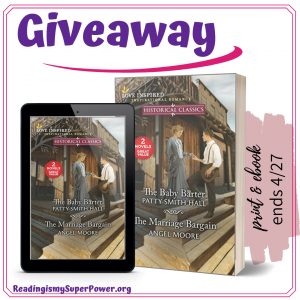 Patty Smith Hall is offering a copy of The Baby Barter/The Marriage Bargain 2-in-1 classics release to TWO of my readers! One winner will receive a print copy, and one winner will receive an ebook. (US/CAN only. Void where prohibited by law or logistics.) This giveaway is subject to Reading Is My SuperPower’s giveaway policies which can be found here. Enter via the Rafflecopter form below.


What about you? What makes you want to read The Baby Barter by Patty Smith Hall?

20 responses to “Author Interview (and a Giveaway!): Patty Smith Hall & The Baby Barter”